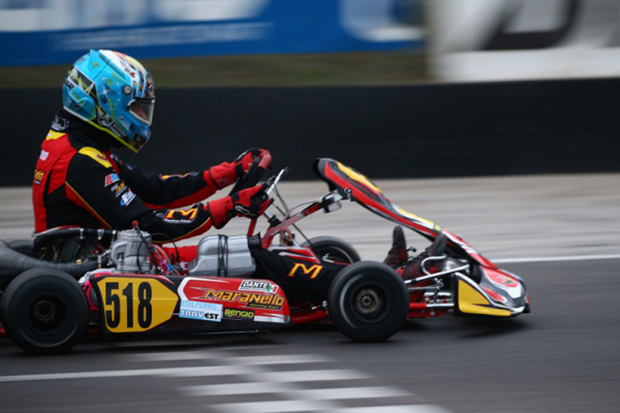 Massimo Dante and Marco Bannini secured the second position respectively in KZ2 and KZN Under at the opener of the Spring Trophy at the South Garda Karting in Lonato. Cristian Griggio also among the best of KZN Over.

Maranello Kart’s drivers have been among the strongest protagonists of the first round of the Spring Trophy. The race held at the South Garda Karting had 321 drivers at the start from 23 different Countries.

The team’s performance in KZ2 and in the new KZN has been exceptional, but the competitiveness level shown in the other categories has been remarkable too.

Massimo Dante claimed a podium finish in KZ2 ending a weekend lived as one of the main protagonists since qualifying and heats in the second place. Dante put in an excellent crescendo in the Final race and crossed the finish line in the slipstream of the winner claiming also the fastest lap of the race in 46.165s.

Maranello Kart took another podium with Marco Vannini in KZN Under (open to up to 35 years old drivers). He posted the quickest time in Series-1 qualifying with a best lap of 46.871s, ended the Prefinal in third place and closed his weekend with the second place in the Final.

Cristian Griggio was very close to securing the podium in KZN Over. He put in an exceptional comeback race from the back of the grid recovering 15 places up to P4. Griggio’s Final had been unfortunately spoiled by the retirement in Prefinal when he was standing third. Without this hiccup, Griggio’s weekend could have been more satisfying as he had also posted the pole position time in qualifying.

Mattia Simonini run a good race in X30 Junior. The Maranello Kart’s driver closed the race in 12th place after gaining 10 positions. In X30 Senior Mario Martucci had to retire from the second chance race and therefore could not qualify for the Final.

Among the numerous Maranello Kart’s drivers, Andrea Ceresoli was also among the quickest of KZ2 and ended seventh, while Fabrizio Rosati (Team SRP) ended 11th due to a 5s time penalty. Alessio La Martina (SRP) put in a good crescendo of results and managed to end 13th after getting 10 places back. Gabrio Bizzozero was 16th and led the Slovenian Sara Markucic. Christoph Hold had to retire due to a technical problem, while Luigi Del Vecchio (Team Oracle) had a similar fate due to an incident. The two drivers were both in the top ten.

Among the other Finalists in KZN Under, Francesco Simonazzi was 15th, Alberto Magnani 21st, Andrea Pasquinelli 24th, Michael Dalle Stelle had to retire after ending the Prefinal in P12. Jacopo Vannelli was 15th in KZN Over, while Davide Bottaro was 27th in 60 Mini.

The next round for Maranello Kart is the closer of the Spring Trophy on March 30-31.