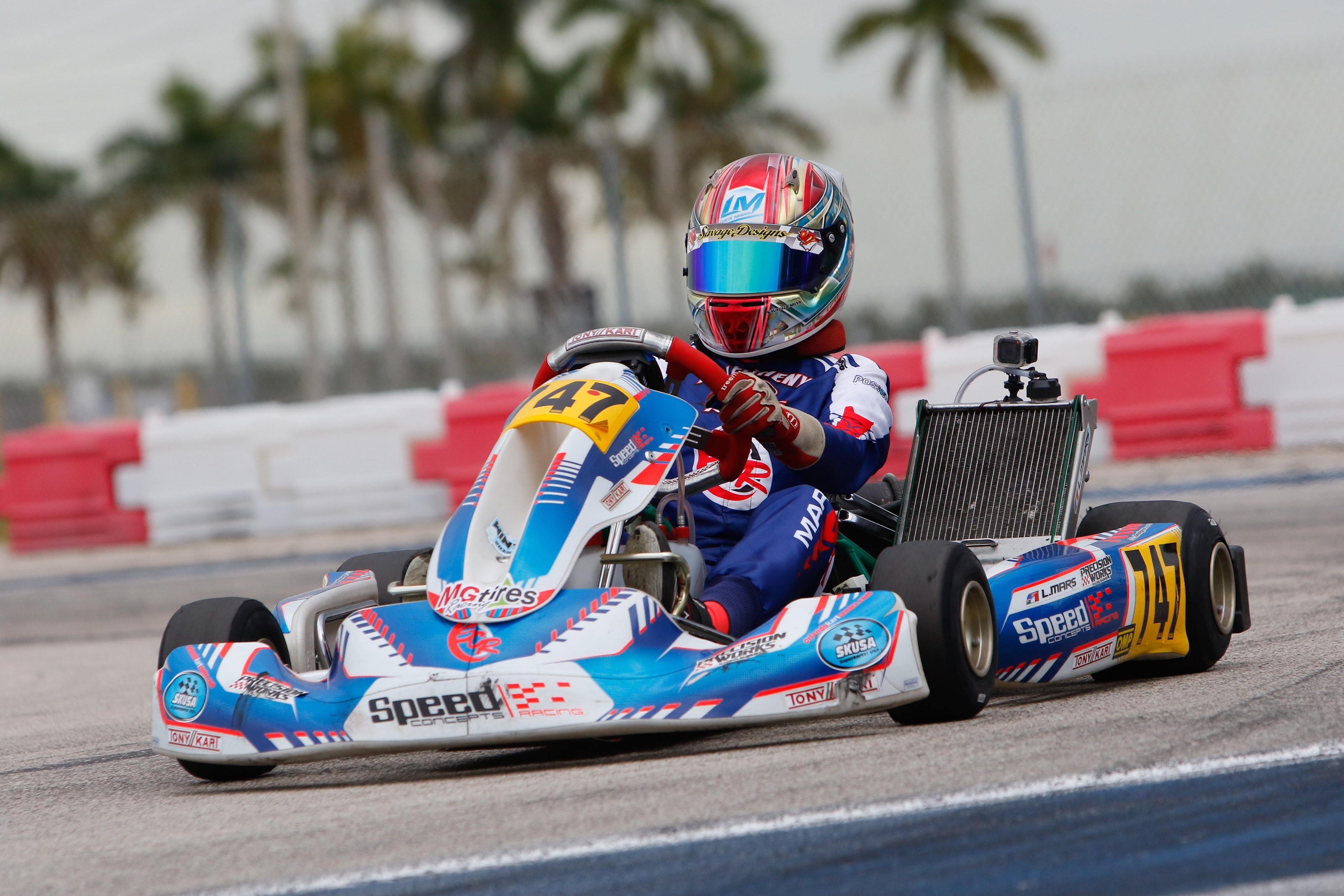 Luca Mars won the final round of the SKUSA Winter Series to secure the X30 Junior title (Photo: On Track Promotions - otp.ca)

2019 is the second full season of competing at the Junior level for Pennsylvania native Luca Mars. The 2018 SKUSA Pro Tour was a learning curve for now 13-year-old, battling tough all season long to end up with a runner-up finish at the final round to end up 12th in the X30 Junior point standings. To close out the year, Mars ended up on the podium at the SKUSA SuperNationals 22, placing fourth while recording fast lap of the race. Ending the year even better, Mars finished sixth at the Rotax Max Challenge Grand Finals in Brazil. 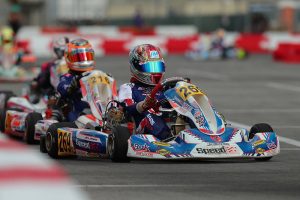 Mars enters the new year as one of the favorites for the season, especially after a solid winter. Luca was among the top drivers at the opening event of the SKUSA Winter Series at the AMR Homestead-Miami Motorplex presented by MG Tires. In January, Mars came up short of the podium both days but put himself toward the top of the championship chase. He would step up in the month of February for Round Three and Four. Saturday in Homestead, Mars won the Prefinal and finished runner-up to further establish his bid for the Winter title.

The final round was the best performance of the four for Mars. He came up 18 thousandths short in qualifying for the fast time. Mars was shuffled back early in the Prefinal, but fought his way back to second after the 13-lap battle. The 22-lap Final was a fight to the very end. Mars led four different times before Mexican driver Noel Leon grabbed the lead and edged him out for the victory. A jump start penalty would take the win away from Leon, handing it to Mars to become the third different Speed Concepts Racing driver to win in the four rounds. The victory capped off a championship run, earning the SKUSA Winter Series title.

Following each SKUSA Winter Series weekend, Mars ventured over to the Hard Rock Stadium for the opening two events of the Rok Cup USA Florida Winter Series. The opening round in January, Mars was among the top contenders, setting fast time in qualifying and winning two of the three heat races. After a challenging main event, Mars was granted the victory following a pushback bumper penalty to provisional winner Brent Crews. The weekend in February outside the home of the Miami Dolphins started similar. Mars missed out on top time in qualifying but still won two of the three heat races. Starting on the pole position of the Prefinal, Mars grabbed the race win before leading the Final wire-to-wire for a second series victory.

Mars enters the Rok Cup USA Florida Winter Tour series finale as the championship leader over Brazilian Enrico De Lucca and Alessandro de Tullio. The title will be decided this weekend at the Ocala Gran Prix in Ocala, Florida.

Luca, no stranger to the international scene, was selected as the USA entrant to the FIA-CIK Academy Trophy program for 2019. Mars will compete in the three-race series, representing the United States of America as decided by ACCUS. The first round is in Wackersdorf, Germany in May, with trips to Sarno, Italy in June and Lonato, Italy in September to close out the championship chase. Mars will continue to race here in the USA at major events that do not conflict with his European schedule. But first, it’s the FWT championship and a possible ticket to the Rok Cup International Final up for grabs. 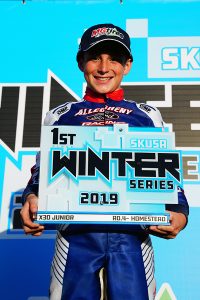 Chassis: Tony Kart
Engine/Engine Builder: Swedetech (Rok) Precision Works (X30)
Sponsors: Speed Concepts Racing
Series You Compete In: SKUSA, Florida Winter Tour, Academy Trophy, WKA, USPKS
Years Karting: 7
How did you get started in karting? My dad raced cars..
What has been the high point in your racing career? Finishing 6th at the Rotax Grand Finals in Brazil
What are your goals in racing? To win races in Cadet, Junior and Senior classes. Win an international championship.
In a few words, how would you describe your driving style? Smooth. Fast. Aggressive.
Funniest moment at the race track? My dad doing a track walk with me at my first national race and not knowing the track direction. He ended up showing me the wrong way. In Italy hitting a lady in the head with a tape ball.

What do you do when not at the track? Basketball, video games, swim, Top Golf
What are your goals outside of karting? Continue to get good grades in school, be a good person.
What app or game do you play right now? NBA, Fortnite
What type of street car would you like to drive? Ford Raptor, Jeep Wrangler Unlimited with top off or Ford Mustang GT350R
What are your pet peeves or things that irritate you? Spiders, people that slurp their drink and food, getting jump scared.
What do you think could be done to improve the sport of karting? On a race weekend have 4 heats, prefinal and 1 final instead of double race weekends.
What are your favorite aspects about the sport of karting? Racing hard on track and being friends with competitors off of track.