Two trips to top of the podium to begin 2019 Superkarts! USA Pro Tour 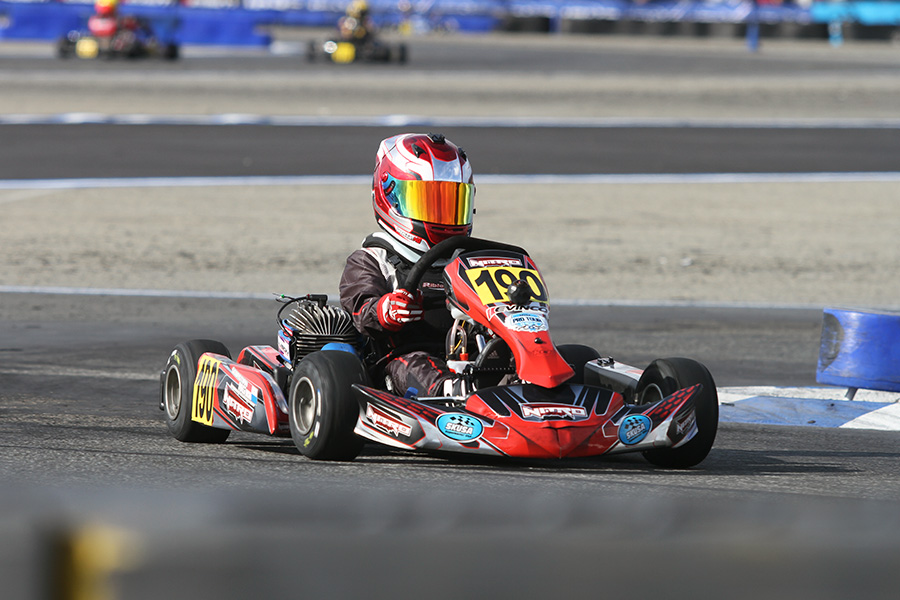 The 2019 season for the Superkarts! USA Pro Tour program began at the CalSpeed Karting facility in Fontana, California for the third edition of the SKUSA WinterNationals in early March. It was a long journey for Sebastian Ng from the Central American country of Panama, as he joined his Nitro Kart teammates on March 1-3 for the opening two rounds of the Mini Swift championship chase. Weather was the story all weekend, with Saturday’s rain drying out on Sunday. As a second-year Mini Swift driver, Ng shined in both conditions, coming away with trips to the top of the podium following each main event.

The heavy rain on Saturday challenged the 34 drivers competing in the Mini Swift category. Sebastian found himself in the 11th spot after qualifying, certainly a strong run considering the situation. Conditions improved slightly for the Prefinal, as did Ng’s position, as he advanced eight spots to finish third in the short eight-lap race to line up inside row two for the main event. In the Final, it was a three-driver fight for the victory with Sebastian vying for the top spot. The race came down to a three-wide photo finish in the rain, with Ng crossing the line in third. Following the race, the top-two drivers received penalties, thereby promoting Sebastian to the top of the podium with the win. 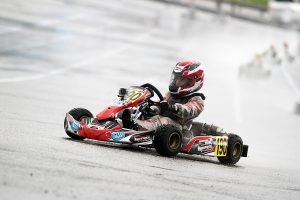 In the wet and the dry, Sebastian Ng kept his Nitro Kart at the front of the field around the CalSpeed Karting facility in California (Photo: eKartingNews.com)

Conditions changed as the Mini Swift category hit the track on Sunday for qualifying. Half of the drivers were on rain tires, and half were on dry tires. It was a mixture of times throughout the session as Sebastian came out of the run with the eighth quickest lap. The Prefinal was contested on a dry surface, as Ng battled hard throughout the eight-lap session, and gained one spot to finish seventh. Strong opening laps of the Final saw Sebastian climb up to the lead. He relinquished the position on the next lap, but he and the leader pulled away from the field to decide the victory in the 18-lap main event amongst themselves. Ng attempted to steal the lead on the final circuit, but came up just short at the line. A blocking penalty to the provisional winner helped to move Sebastian to the top step of the podium, completing his sweep the wins on the weekend.

“Sebastian was on point all weekend, providing great feedback so we could keep his kart tuned in for the constant variable track conditions,” stated Nitro Kart owner Nick Tucker. “He kept the kart at the front of the pack all weekend with smart driving.”

Sebastian has enjoyed great success in the Superkarts! USA Pro Tour races in California, going undefeated in two events. Ng swept the Micro Swift main events during the SKUSA Pro Tour SpringNationals at Simraceway Performance Karting Center in Sonoma back in May 2017, and these two wins in Mini Swift are now added to his resume.

Next on the racing calendar is a trip to Europe to compete in the IAME Euro Series opening round in Mariembourg, Belgium at the legendary Karting des Fagnes circuit on March 28-31. The following weekend, Ng will return to the USA for the opening event for the United States Pro Kart Series, set for Ocala Gran Prix in Florida. Sebastian continues his journey toward the SKUSA Pro Tour championship with the 10th annual SpringNationals, set for May 3-5 at the Utah Motorsports Campus in Tooele, Utah.

Sebastian would like to thank the following companies for their support toward his racing program; Granma POPO from Cremapan, Pirate Kart Racing, Orillac-Calvo Clinic, Arrendadora Economica, PonyRacing, Nitro Kart, and Allison Racing Engines. Visit the Sebastian Ng Facebook page to follow his progress throughout 2018.