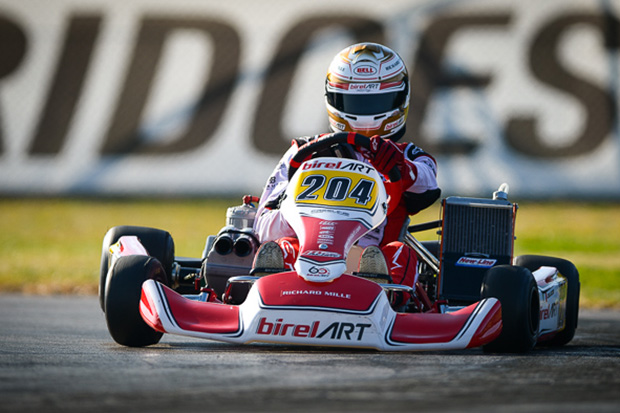 The performances on the adhesive track of Muro Leccese from Luigi Coluccio and Alex Irlando in OK, as well as by Rafael Camara and Cristian Bertuca in Junior, validated the work undertaken by the Birel ART Racing Team since the beginning of the season. The team were able to take advantage of these still unprecedented conditions to improve their preparation for the upcoming major events.

The third of the four events of the WSK Super Master was a meeting in southern Italy at the La Conca circuit. As temperatures were significantly higher than at the start of the season, the Muro Leccese track offered much stronger grip than usual. Under the management of Luca Filini, the Birel Racing Team has used its great experience to adapt to this new situation and gather important data for the rest of the season.

“Our work plan continues unabated,” said Ronni Sala, President of Birel ART Group. “We had good performances this weekend, although the races were sometimes difficult on La Conca’s rubber. Young drivers do not always have the skills or the physical condition to easily address these conditions. It was a good workout for everyone!”

Usually a KZ driver, Alex Irlando began preparing for the FIA Karting European Championship – OK by competing at La Conca in this direct-drive category. He quickly got his bearings and was around the top 10 throughout the event. Luigi Coluccio was very much at the forefront during the Qualifying stages where he was regularly among the top five with excellent lap times. A decline in performance caused by a carburettor problem did not allow him to fight for victory on Sunday and he finished 11th in the Final after a spoiler penalty.

There was no lack good performances either in the Birel ART Racing Team in OK-Junior. Cristian Bertuca made a very convincing recovery of 22 places during the Qualifying Heats, but he could not finish the Final. Rafael Camara had several serious setbacks in his heats after taking 10th in Qualifying. He was 30th after the Heats and managed to finish 12th in the Final.

The two female drivers of the Richard Mille Young Talent Academy faced the Muro Leccese meeting with determination. Maja Weug made good progress in OK by entering the top 10 of her Prefinal and gaining places again in the Final to finish in an excellent 13th position, a result that moved her up the standings of the series significantly.

Discovering the Muro Leccese track and running in the rubber was a difficult challenge for Julia Ayoub. Unqualified for the Final following a retirement in the Prefinal, the young Brazilian showed her motivation by moving up no less than 16 places to finish 14th in the B Final.

Armed with these latest lessons, the Birel ART Racing Team will head to the Sarno track to prepare for the WSK Super Master round and the first WSK Euro Series event, while anticipating the conclusion of the FIA Karting European Championship – KZ and KZ2 to be held on the Neapolitan circuit in mid-June.