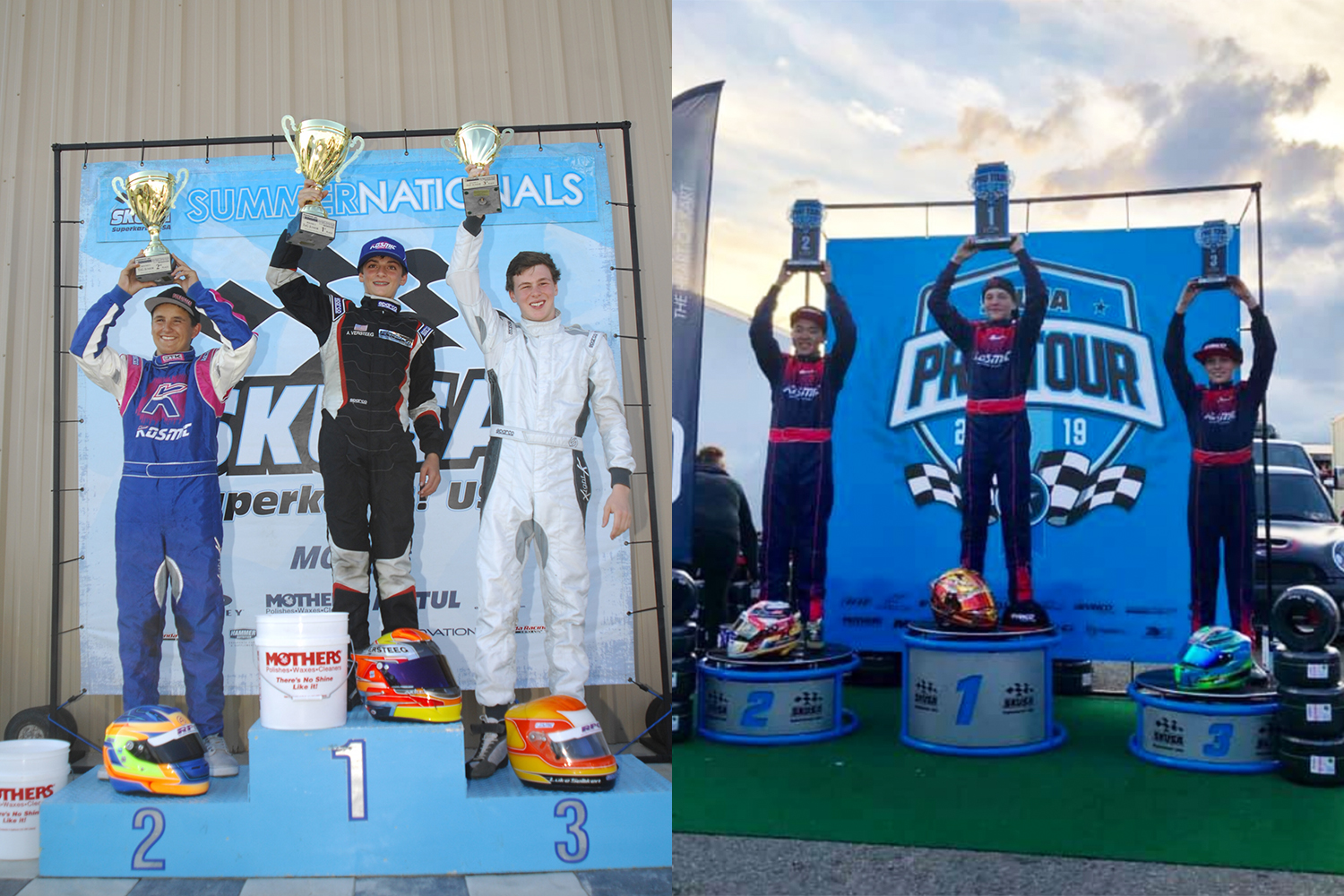 The massive momentum fueled by their Superkarts! USA Winter Series championship in the X30 Senior class in Florida carried the Rolison Performance Group squad into the opening round of the SKUSA Pro Tour this past weekend. In a weekend that featured full wet conditions on Saturday and dry running on Sunday, the highlight of the team’s overall performances at the third annual SKUSA WinterNationals was the complete sweep of the Sunday podium in X30 Junior, led by the breakthrough winner for Texas Branyon Tiner aboard his RGP Kosmic. Jason Leung and Josh Pierson completed the podium after working their way forward through the 20-lap main event. All told, the team fielded entries for 13 different drivers across six categories and posted two wins, seven podiums, 12 top-fives and 16 top-10s. Coming off the X30 Senior championship in the SKUSA Winter Series, this continuing success bodes well for the 2019 season.

“I’m extremely happy with the performances of our Junior drivers and sweeping the podium on Sunday was huge,” enthused Mike Rolison, RPG Team Principal. “It’s a testament to our driver development program and our coaching staff to have Biggs, Jason and Josh show so well. We’ve been working with them for some time and the effort is paying off. I’m extremely proud of all three of them. I want to thank all the RPG staff for their tireless work and all the drivers and families for their belief and commitment to the RGP program.”

Branyon Tiner led the team’s X30 Junior squad in Fontana, dominating the Sunday action to score his first national level victory after finishing seventh in the wet Round #1. The Texan was the driver to watch in Round #2, winning the Prefinal and the Final. In truth, Sunday’s final turned into an RPG highlight reel as Leung and Pierson drove to the front to finish second and third, completed the sweep of the podium. It was the first time a team had swept a Pro Tour podium since 2013, when RPG did the exact same thing at the SummerNationals at Grand Junction Motor Speedway. Lueng and Pierson were 14th and 11th, respectively, on Saturday. Lueng is new to the RPG family, having joined the team for the LAKC event a week prior to the WinterNationals, and Mike Rolison is pleased to have Jason under the tent, having followed his progress closely on the Pacific Northwest karting scene. Caleb Shrader finished 30th on Saturday and bounced back to 17th on Sunday in a stacked 43-kart field.

SKUSA Winter Series champion Ryan Norberg carried the RPG X30 Senior flag into the WinterNationals, and advanced from 10th in the Prefinal to a strong fifth in Saturday’s challenging wet conditions. On Sunday, Ryan drove to the front of the field to finish second, but he was hit with a questionable penalty that dropped him to ninth in the final classifications. Jacob Gulick showed well all weekend, finish ninth on Saturday and 12th on Sunday. Hannah Greenemeier turned in a best result of eighth on Sunday, after finishing 19th in the rain on Saturday. Colin Neal joined the team once again and carded finishes of 28th and 19th.

Tim Meyer raced under the RPG banner in Fontana and was in the middle of the fight in X30 Master all weekend. Tim finished fifth on Saturday is the slippery conditions and was sixth on Sunday, kicking off the 2019 Pro Tour with a strong outing.

Rolison Performance Group fielded two drivers in the new G1 Gladiator class, which uses the new IAME SSE 175cc gearbox engine and is reserved for drivers 30 years of age and older. Canadian Dan Monteiro finished second in Round 1 and fourth in Round 2. Justin Peck stepped up from fourth on Saturday to the third step on the podium on Sunday. Both drivers will be back with the team for the upcoming SKUSA SummerNationals in Utah on the first weekend of May.

Graham Trammell was RPG’s lone driver in the Micro Swift category, and he excelled all weekend, scoring his first national main event on Saturday after qualifying second and winning the Prefinal. In Sunday’s dry action, Trammell was again in the mix. Graham qualified fourth and then ran third in both the Prefinal and the Final, adding another podium result to RPG’s weekend record.

The KA100 Junior class is new on the SKUSA Pro Tour this year and RPG had both Caleb Shrader and Dylan Peck in the category. Shrader bounced back from a DNF on Saturday to finish a strong fourth on Sunday. Peck did not have any luck on the weekend and carded a pair of 13th place results in his first national, but he gained valuable experience that will pay dividends throughout the year.

The team now sets its sights on the opening round of the Superkarts! USA California ProKart Challenge, which will take place on March 30-31 at Buttonwillow Raceway Park.

The SKUSA SuperNationals may be over 10 months away, but the time is right to lock in your place under the RPG tent for the biggest race in North America. The team will have limited availability this year in order to maintain their elevated level of customer service and professional support. At last year’s SuperNats, all eight of Rolison Performance Group’s X30 Senior drivers made the SuperSunday main event, proving the team’s ability to field race-winning packages. RPG scored the prestigious X30 Senior win courtesy of Ben Cooper.