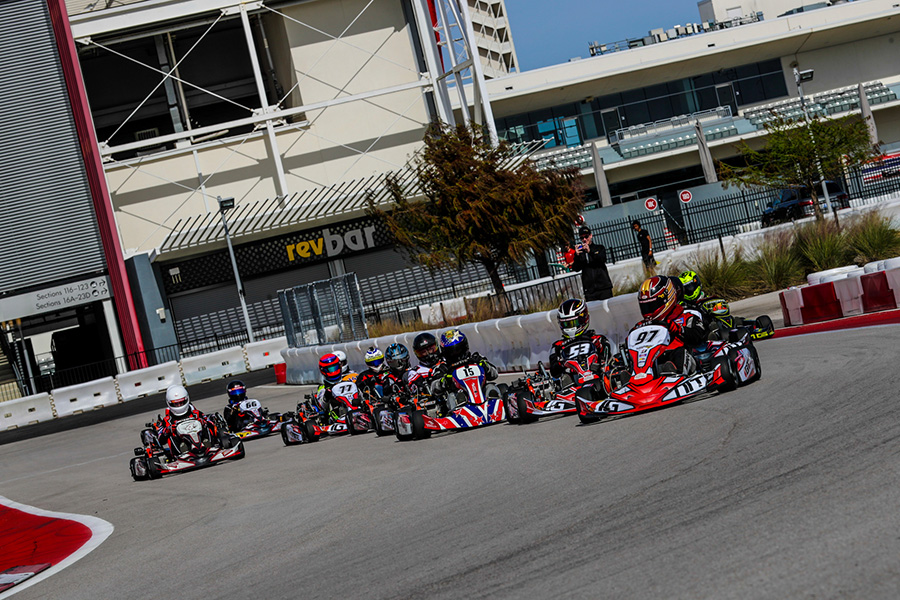 Circuit of the Americas, Formula One’s premiere United States destination, hosted its first ever sprint karting event to the Margay Ignite and IAME KA100 categories on February 22-24. The track instantly became an all-time favorite to the majority of the drivers with its elevation change and flowy corners, many sharing similar characteristics to the “big track”. The combination between the fast corners and wide track created great racing through the weekend providing plenty of overtaking opportunities and overall a great driving experience.

This would also mark the first event for the new Hoosier R80 compound to the Ignite class. Drivers praised the R80’s higher grip level without having to make many setup changes to adapt to its differed performance. Although a bit softer, the durability was also noted among drivers to continue with the same set of tires through the weekend leaving plenty of tread for following race events through the season.

In Ignite Rookie, Lane Mayer showed dominance all weekend taking the top spot in the qualifying, pre-final and final sessions both days. The only driver to contest in speed was Houston, Texas’ Carson Garvish narrowly missing the pole in Sunday’s event. Race Beckman would achieve a second-place finish both race days after a tough battle with Quinn Ahrens on Saturday and Carson Garvish on Sunday. Ahrens and Garvish would complete the podium on their respective days. 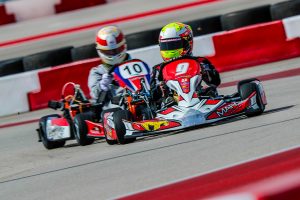 St. Louis, Missouri’s Reid Sweeney and Austin, Texas’ own Peyton Phillips would trade wins on the weekend after some of the best battles of the event. On Saturday, Sweeney would hold the lead in Saturday’s feature until two to go when Phillips would make the over under into the sweeping turn 10-11-12 right hand complex. Sweeney would try to re-attempt the pass on the last lap on the same corner, but Phillips defended the inside and would maintain his lead. Austin, Texas’ Gage Hembree would complete the podium after a great battle with Jaiden Beckman and JD Lamping. On Sunday’s event, Sweeney would take the early lead in the feature and never look back. Phillips would attempt a late-brake pass into turn 10 which put him into a half-spin allowing Sweeney to pull away for the win. Completing the podium on Sunday was Cape Girardeau, Missouri’s Jake Coalter.

After a highly successful trip to WKA’s Daytona Kartweek, Southern Illinois’ Evan Stamer would continue his win-streak by taking victories both Saturday and Sunday in Austin, TX. On Saturday, Ottawa, Canada’s Charlotte Lalonde would show her prowess and edge Stamer in the pre-final. In the final, Stamer would quickly take the lead with Lalonde trailing his marks through the remainder of the race. Austin, Texas’ Cameron Wolverton made a late race statement, coming through the field to third place, narrowly missing second. On Sunday, Evan Stamer would dominantly sweep all the sessions. In the final, Lalonde would hold onto second through most of the race until Dallas, Texas’ Ethan Arndt and Omaha, Nebraska’s Mike Long would battle hard for the remaining podium spots. On the last lap, Arndt would make the pass into turn 10 where Lalonde would hold on side-by-side all the way to turn 14. Lalonde having to give up the position would allow Long to sneak by and claim the last podium spot at the line. 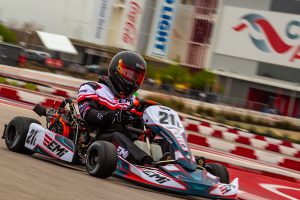 In Ignite Masters and Ignite Heavy, the “Nebraska Cornhusker” team would bring home the majority of the hardware. In Saturday’s race, Mike Long would dominate the Senior class with St. Louis, Missouri’s Mike Long and Micah Floretta completing the podium. In Ignite Heavy, Austin Texas’ Joe Burns would “flip-to-win”. After a crash in the pre-final, Burnes came through the field in the feature and took the top spot and his first ever win. In Sunday’s event, Long would again take the top spot in the master’s field with Floretta in second and Moore in third. In Ignite Heavy, Nebraska’s Josh Holt would take the big victory with John Garvish and Joseph Burns rounding the podium.