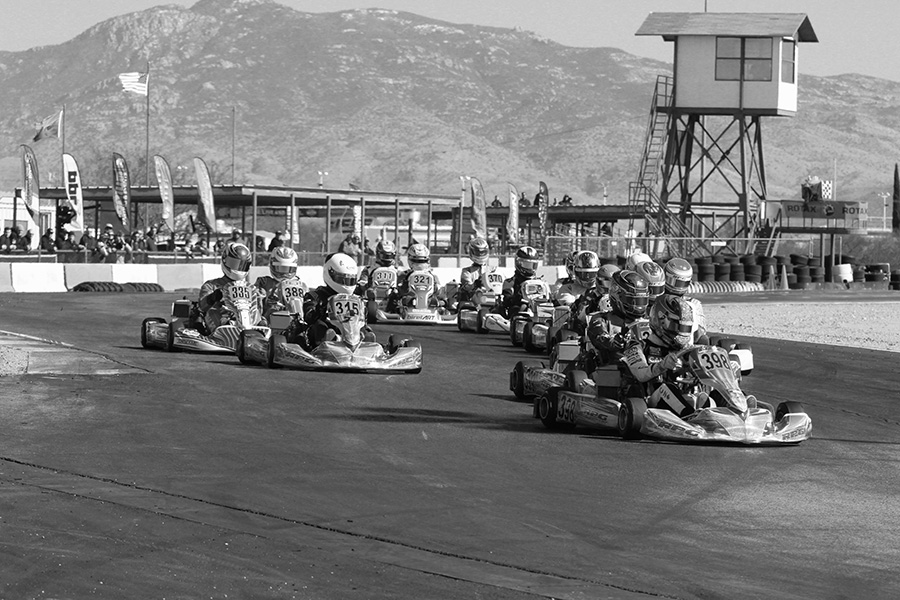 The middle event of the 2019 Challenge of the Americas is set for this weekend at the Musselman Honda Circuit in Tucson, Arizona. Round Three and Four of the six-race championship program will take place on Saturday and Sunday as the premier winter series on the left coast returns to the ‘Old Pueblo’ as tickets to the Rok Cup International Final and ROK the RIO events remain up for grabs.

The Musselman Honda Circuit has been part of the Challenge since 2012, off the calendar last season. Those first six years, the Tucson trip was the opening rounds of the Challenge, moving to be the middle stop in 2019. The circuit in Tucson is a replica of the Suzuka track in Japan, at just under 8/10-mile. The 13-turn circuit provides a number of challenging sections, including the opening ‘spoon’, the chicane, ‘G-Kurve’ and the esses. The three straights measuring over 400 feet each let the engines show their speed. 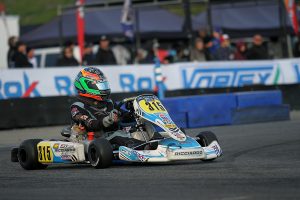 Four podiums on the weekend put Colby Dubato in the championship chases for both Senior Rok and Senior 100cc (Photo: EKN)

eKartingNews.com is back for an eighth straight year with Challenge of the Americas to provide industry-leading coverage from each of the three events for the 2019 season. Those karting enthusiasts not in attendance can listen from home or on the road to the EKN Live broadcast page at www.ekartingnews.com/live – presented by VemmeKart, KartLift, and Nitro Kart- with Eric Brennan making his debut with the Challenge to provide the play-by-play call. Daily reports and updates on the EKN Social Media network will fill up your timeline throughout the weekend.

The top-four drivers in the Senior Rok championship are separated by just 30 points. Colby DuBato (PKS / Ricciardo) was the only driver at CalSpeed to stand on the podium both days, placing second and third, to leave as the championship leader. Last year’s champion Jim McKinney (Ruthless / Exprit) trails by just 10 points thanks to his runner-up result in Round Two, heading to a familiar circuit in his home state and site of his first Challenge victory back in January 2016. Senior rookie Cooper Becklin (GKH / Birel ART) scored victory in his inaugural start at CalSpeed, and enters the weekend third in the points, just 13 markers back. Jake Drew (PGR / Ricciardo) has four victories in his last six starts at the Challenge. The Round Two sweeper had victory taken away on Saturday at CalSpeed with a broken rear bumper. Drew now trails in the standings by 30 points to Dubato. 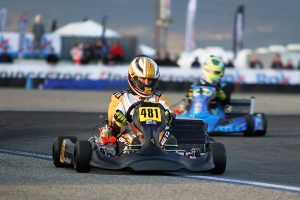 Shifter Rok Senior point leader Nicky Hays (PGR / Ricciardo) is not scheduled to compete in Tucson as of Sunday. The Round Two winner has a busy racing season ahead, and is unable to make the trek east to Tucson. This puts Brian Keck (RWR / CRG) into the driver’s seat in the title chase, riding off a solid CalSpeed weekend highlighted by a third place on Saturday and pole position on Sunday. His advantage is just six points with Round One winner Zach Pettinicchi (VRP / Formula K) in the hunt. Pettinicchi swept the action on Saturday in CalSpeed. Veteran Ron White (RWR / CRG) drove from last to second in Round Two, helping to advance him up to fourth in the championship standings, only 23 points back of Keck. Prescott Campbell (MRC / Aluminos) was quick all weekend in CalSpeed, winning the Prefinal on Sunday only to finish third in the Final. He sits behind White, putting the top-five within 56 points of each other.

The Shifter Masters Rok standings is controlled by Rod Clinard (CRG Nordam). The Texan won the opening round and placed third in the rain-soaked Final on Sunday. He leads last year’s top two drivers Kalvin Chen (FW / CompKart) and Nick Firestone (Ruthless / DR Kart). Defending champion Chen was top-five all weekend at CalSpeed, placing runner-up on Sunday. Firestone was runner-up on Saturday, and trails Clinard by 53 points. Nathan Stewart (DKC / Sodikart) was third in qualifying both days, unable to translate that into podium results and sits fifth in the standings. Making a return to the series is longtime competitor Ben Schermerhorn (Birel ART), set to debut in the Shifter Masters Rok division. 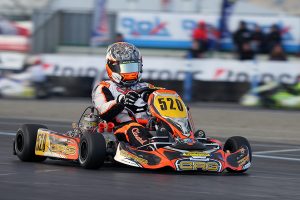 The Junior Rok division appears to be a two-driver fight moving forward for the championship. Round Two winner William Ferguson (SSM / Exprit) holds the point lead heading into Tucson over Ethan Ho (APM / Tony Kart). Ho was top-three in all on-track sessions, placing second and third in the two main events. The gap between he and Ferguson is just eight points. Round One winner Jonathon Portz and Cole Morgan are third and fourth in the standings, not scheduled to compete. That allows Liam Letzsch (CBM / FA Kart), the top qualifier from Round One, the opportunity to move up the standings and challenge the top-two with a solid effort in Tucson.

New for the 2019 Challenge is the Senior 100cc division. The racing at CalSpeed was exciting, and the championship chase should be the same. Inaugural winner Adam Kasick (FDM / CompKart) leads the standings by a solid 33 points, thanks to placing top-three in all sessions at CalSpeed. Kyle Hayner (HRT / Kosmic) was among the quickest drivers all weekend, running out of luck to battle for victory. He sits second ahead of Colby Dubato (PKS / Ricciardo), who stood on the podium four times on the weekend with his double duty effort. The Senior Rok point leader was third in both main events in Senior 100cc. Jackson Dunn (FDM / CompKart) was the second winner on the weekend in CalSpeed, outlasting Kasick in a great battle on Sunday. The top-four in the standings are separated by 51 points heading into the weekend. Jimmy Gregory (K&K) is the lone Masters 100cc entry once again for Tucson. 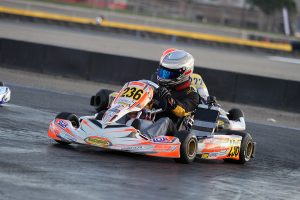 Erik Jackson has started out the defense of his Masters Rok title from last year on the right path. After a challenging start to the weekend, Jackson swept Round Two at CalSpeed to leave as the championship leader. He holds a slim eight-point advantage over Derek Wang (FTK / Tony Kart). Wang was top-three in all the on-track sessions last month, placing third and runner-up in the main events. Timothy Meyer (Atomic / Kosmic) and former series champion Billy Cleavelin (RPG / Kosmic) – who won Round One – has some catching up to do on the weekend in order to challenge for the title. They trail Jackson by 64 and 71 points respectively.

Enzo Deligny (Tony Kart) and Logan Toke (Top Kart) were 1-2 at the opening event in Mini Rok. Toke took the opening round with Deligny the second, as he leads the championship chase by a slim five points. Series rookie Anthony White (CRG) and Ethan Thorne (Vemme) each placed on the podium in third, and need to advance further up the steps in order to challenge the top-two for the title. 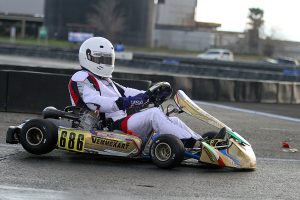 Filippo Sala (Vemme) nearly swept the weekend in the Micro Swift division back at CalSpeed. Sala missed out on the top spot in qualifying in Round Two, and leads the championship chase by 39 points thanks to his two victories. Zachary Walrod (Benik) sits second as the top challenger.