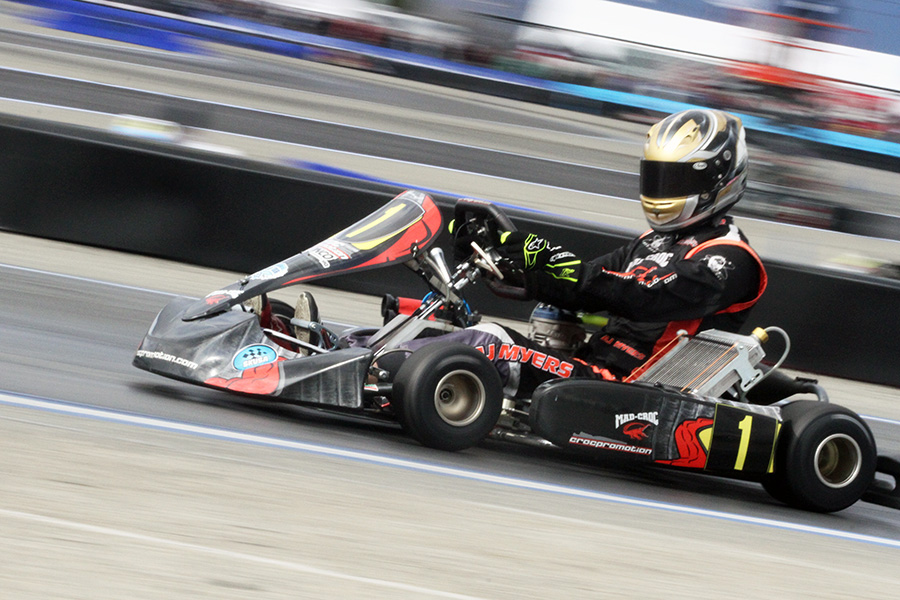 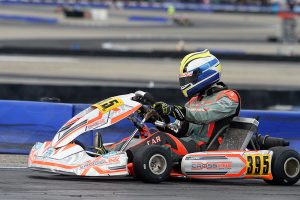 The third edition of the Superkarts! USA Pro Tour WinterNationals came to a close on Sunday, thankfully ending under much better weather conditions. While Saturday was filled with on-and-off rain, the precipitation ended on Sunday during qualifying with the skies above the CalSpeed Karting facility in Fontana, California clearing up enough to welcome the sun for periods of time, at least until the podium ceremonies were completed. The 12 divisions in competition closed out Round Two of the SKUSA Pro Tour championship chase, welcoming another group of new winners into the history books.

Winning at the SKUSA Pro Tour level, or in 2019 for that matter, is nothing new to AJ Myers. The Mad Old Nut Racing / Croc Promotion USA driver shined in the Pro Shifter 1/2 25-lap Final to grab his fourth career Pro Tour victory. The day did not begin at the top however, as Myers finished ninth in the qualifying session. The track was not completely dry from overnight rain, yet the quickest option was still the dry Evinco tires. Alex Keyes (PSL / Birel ART) came out of the session with fast time, but it was CRG Nordam’s Kyle Wick who drove away in the Prefinal. Wick led the first lap of the Final until an issue on lap two dropped him out of the top-five. This gave Pro 2 driver Race Liberante (J3 / CompKart) the lead, where he stayed until Myers and Saturday winner Andrew Bujdoso (MONR / Croc) ran him down. The two drove away to score another 1-2 finish, this time with Myers on top. Liberante was run down by a charging Wick and, when making a pass in turn four, Wick slide wide into Liberante, who made contact with the barriers on the outside of turn four. That ended his race and a chance at the win in class. Wick would go on to place third, with Keawn Tandon (DRT / DR Kart) in fourth and Prescott Campbell (MRC / Aluminos) in fifth. Max Hewitt (CRG) scored the victory in Pro 2, his second career win on the Pro Tour, with Michael Ilavia (Crosslink / Exprit) and Blair Hosie (MRC / Aluminos) joining him on the podium. 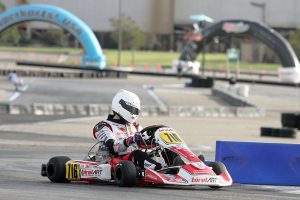 2017 SKUSA SuperNationals winner Joshua Car (Crosslink / Exprit) swept the action in the X30 Senior division. After setting fast time in qualifying, the Aussie won the Prefinal to start the main event from the pole position. That and consistent lap times was all that Car needed to claim his first SKUSA Pro Tour victory, leading wire-to-wire. Three-time SKUSA Pro Tour champion Ryan Norberg (RPG / Kosmic) started eighth and worked his way up to the second spot, working past Oliver Hodgson (J3 / CompKart) in the process. Dante Yu (J3 / CompKart) followed him through, also slipping by Hodgson late in the race. After the race, Norberg was penalized for passing under a yellow flag, thus receiving a 10-second penalty. This call promoted Yu to second and Hodgson to third. Saturday winner Christian Brooks (Nash / FA Kart) was another driver charging forward, jumping up 12 spots to fourth with Brazilian Arthur Leist (PSL / Birel ART) in fifth.

Three drivers were able to double up in the win column on the weekend. The first being Jordon Musser in the G1 category. Musser (PSL / Birel ART) swept Round Two as he did on Saturday, however, it was a much closer battle. Last year’s S4 Super Master champion John Crow (MRC / Aluminos) put the pressure on throughout the day, including Justin Peck (RPG / Kosmic) in qualifying. The three were separated by just one tenth in the session with Musser able to edge out Peck by 98 thousandths with Crow in third. Musser led all eight laps of the Prefinal with Crow right on his bumper. Crow jumped out with the holeshot with Musser not leading for the first time during the 2019 season. The two ran nose to tail for the first 15 laps until Musser made a clean pass for the lead. He led the remainder of the 20 laps to remain undefeated in 2019. Crow was a close second with Peck in third over Dan Monteiro (RPG / Tony Kart). 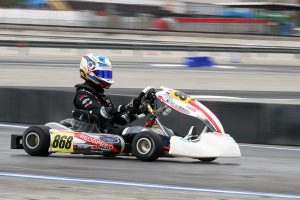 Ethan Ho (APM / Tony Kart) was able to repeat his first SKUSA Pro Tour triumph with a second on Sunday in the KA100 Junior class. Ho was beat out for fast time in qualifying by just 23 thousandths of a second at the hands of Kyffin Simpson (SCR / Tony Kart). Ho fought his way to the front in the Prefinal and then led 18 of the 20 laps to second his second victory. The fight was for second with Diego LaRoque (Ruthless / FA Kart) driving his way from sixth to second with Simpson ending up on the podium in third. Caleb Sharder (RPG / Kosmic) advanced five spots to finish fourth with Connor Zilisch (TF / Tony Kart) in fifth.

For a second straight day, Sebastian Ng (Nitro Kart) came out as the victor in the Mini Swift division without crossing the line first. The qualifying session was a toss-up, with some drivers on wet MG tires and others on the dry Evinco tires. When it was done, Michael Costello (Benik) came away with the quick time over Christian Miles (Kart Republic) and Oscar Iliffe (Tony Kart). Ng was back in the eighth position and finished the Prefinal in seventh. The rest of the field shuffled around with Enzo Deligny (Tony Kart) jumping out to the win over Cameron Weinberg (Nitro Kart) and Jack Jeffers (Benik). Anderson Leonard (Tony Kart) finished fourth and worked his way to the point in the main event with Ng following through. They ran 1-2 for the final 15 laps with Leonard crossing the line first. He would be penalized three seconds for blocking, thus handing the win to Ng and moving Jeffers to second on the podium. Deligny dropped to fourth with Saturday provisional winner Kai Sorensen (Tony Kart) in fifth. 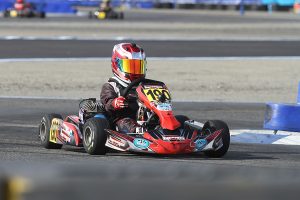 Sebastian Ng is four for four in California for SKUSA Pro Tour, winning both on the weekend in Mini Swift (Photo: EKN)

First time winners at the SKUSA Pro Tour continued with the opening main event of the day – X30 Junior. Texan Branyon Tiner was able to come up from eighth in qualifying to win the Prefinal and then scored the Final for his first career triumph. The podium was all Rolison Performance Group / Kosmic as Jason Leung advanced nine spots to second with Josh Pierson up five to third. Noel Leon (CRG Nordam) led early, dropping back to where he started in fourth. John Burke (IRM / Tony Kart) was among the hard chargers in the race, climbing 13 positions to complete the top-five. 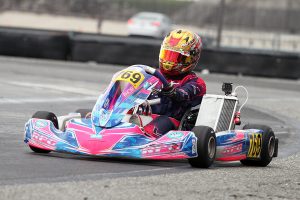 The X30 Master category was swept by two-time SKUSA Pro Tour champion Derek Wang (BBR / Tony Kart). The sweep was not confirmed until after the race was completed. Wang set fast time in qualifying and won the Prefinal. The Final was a battle between he, Jess Peterson (PGR / Ricciardo) and Matt Johnson (Nash / FA Kart). Johnson was able to establish himself in the lead in the second half of the race, taking the provisional victory. A penalty for pushback bumper took the win away from Johnson, and also for Peterson as he crossed the line in second. That promoted Wang to the top step of the podium with Johnson second and Peterson third. Saturday winner Vatche Tatikian (PGR / Ricciardo) was fourth with Carlos Calderon (Aluminos) in fifth. 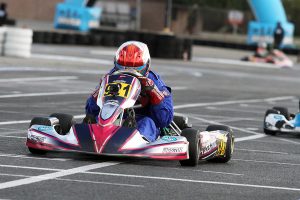 The 2019 SKUSA Pro Tour continues on May 3-5 at the Utah Motorsports Campus – formally known as Miller Motorsports Park – in Tooele, Utah with the 10th running of the SpringNationals.