The 2019 season marks the 10th year of the Superkarts! USA Pro Tour. It all began in California with a trip to Sonoma for the inaugural event in 2010. Everything comes full circle as the Pro Tour kicks off the 10th season in the Golden State, making its first ever visit to the CalSpeed Karting facility in Fontana. The third edition of the WinterNationals moves cross-country from NOLA to outside the Auto Club Speedway, with 200 pre-registered drivers set to do battle on the newly revised ‘Grande’ circuit.

eKartingNews.com remains the official online partner for the SKUSA Pro Tour, having broadcast every race since its inception. Those karting enthusiasts not in attendance can listen from home or on the road to the EKN Live broadcast page at www.ekartingnews.com/live with EKN’s own Rob Howden providing the play-by-play call. This weekend’s broadcast is brought to you by Mad Old Nut Racing, Alan Rudolph Racing Academy and Courtney Concepts. Daily reports and updates on the EKN Social Media network will fill up your timeline throughout the weekend.

The first of two previews was published on Wednesday, with our second taking a look at the X30 and KA100 Senior and Junior divisions along with Mini and Micro Swift. 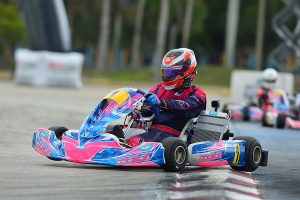 There is no doubt the X30 Senior division under Superkarts! USA remains the largest category. The WinterNationals field features 48 drivers, set to begin a run at a podium, possibly a victory, and even a chance at the championship. All eyes, as they have been for the past three seasons, remain on Ryan Norberg. The three-time SKUSA Pro Tour champion is eyeing a fourth-straight, and momentum is on his side with a solid start to 2019. Norberg made the move to Rolison Performance Group / Kosmic just after the calendar turned over, coming away with three straight wins at the SKUSA Winter Series to claim the championship. He and AJ Myers are the only drivers in 2019 that can repeat their titles from the 2018 season. Myers is doing double duty with Croc Promotion, running both Pro Shifter and X30 Senior.

They are not the only former Pro Tour champions in the X30 Senior field with 2014 champion Jake Craig (RPM / Tony Kart). Craig left last season leading the championship heading into the SummerNats with his car schedule conflicting with the weekend. Add in former Junior champions Alex Bertagnoli (J3 / CompKart) in 2016 and last year’s champ Arias Deukmedjian (LEM / Praga) making the jump this year. Austin Garrison rounds out former champions in the field, as he won the S2 title in 2014 and is set to make his SKUSA Pro Tour debut with CRG Nordam. 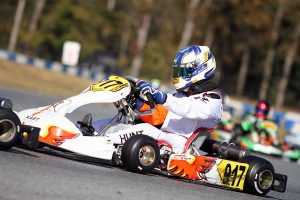 WKA champion Blake Hunt is among those vying for the inaugural KA100 Senior title at SKUSA (Photo: EKN)

Another new part of the SKUSA Pro Tour is the addition of the KA100 package to the championship program. The Senior category is welcoming 12 drivers to the inaugural event, with 10 of them competing at the SuperNationals in either Senior or Junior divisions. Nick Ramirez (Yesnick / Fullerton) and Austin Osborne (LFM / Kosmic) were among those in contention in Vegas, with Ramirez landing on the podium in fifth. Blake Hunt (KSNA / Kart Republic) is the 2018 WKA Manufacturers Cup Series champion, set for a bid at the inaugural SKUSA Pro Tour title this year. Senior rookies include 2018 IKF Grand Nationals champions Oliver Calvo (PKS / Parolin) and Aiden Kempf (Fullerton), along with LAKC X30 Junior champion Alan Tang (Parolin). Calvo is coming off victory at the LAKC event last weekend. 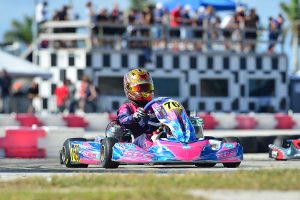 Branyon Tiner is among those in contention in X30 Junior this season (Photo: On Track Promotions – otp.ca)

The next largest category – X30 Junior – is 42 strong with a number of returning drivers in addition to some high profile Junior rookies. Many of those who finished toward the top of the standings have graduated, leaving a void for others to fill in 2019. If you look at those who were strong at the SKUSA Winter Series, it begins with Luke Lange and MacKenzie Clark. The two were among the four different drivers to win in Florida, with Lange (SCR / Tony Kart) placing third in the standings and Clark (Prime / Birel ART) in fifth.

Rolison Performance Group has a number of drivers under its tent riding on some momentum. Josh Pierson (Kosmic) and Jason Leung (Kosmic) ran 1-2 at the recent LAKC event this past weekend, with Branyon Tiner (Kosmic) winning the Prefinal before leaving early to head back to Texas. All are into their second season in the Junior ranks. Also winning at the CalSpeed facility in February at Challenge of the Americas was Jonathon Portz (Nash / FA Kart). Podiums at WKA Daytona KartWeek and COTA put him among the contenders at the WinterNats. CRG Nordam’s Noel Leon was among the quick drivers at the second event of the Florida Winter Tour, with the Mexican driver making his SKUSA Pro Tour debut at the WinterNats. 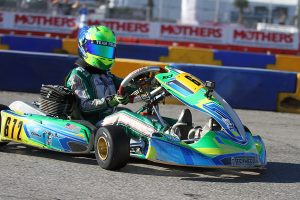 Connor Zilisch is among the many double duty drivers in KA100 Junior (Photo: EKN) 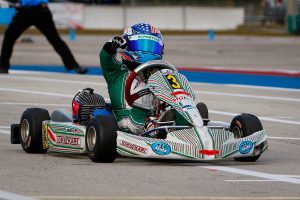 The Mini Swift category is going into the weekend with 33 drivers registered. Over half of the drivers have chance at a podium, winning or to be in contention for the SKUSA Pro Tour title. It all begins with the top returning driver Kai Sorensen. The 2016 SKUSA Pro Tour Micro Swift champion carries the SKUSA #3-plate this year after a solid 2018 season. The Supertune / Tony Kart driver started out 2019 with the SKUSA Winter Series title, scoring two wins.

One of the other two winners from the SKUSA Winter Series is Christian Miles. The KartSport North America / Kart Republic driver is into his second Mini season, beginning 2019 with a sweep of the WKA Daytona KartWeek. Other returning SKUSA Pro Tour drivers include Sebastian Ng (Nitro Kart), Parker DeLong (Nitro Kart), Texas ProKart Challenge champion Jack Jeffers (Benik) and Challenge of the Americas winner at CalSpeed Enzo Deligny (Tony Kart). 2017 Micro Swift champion Elliot Cox (Vemme) is among the three former Micro champions in the field this weekend.

The third is 2018 SKUSA Pro Tour champion Max Garcia (Kart Republic), who leads a strong rookie squad into the 2019 season. Caleb Gafrarar (Birel ART) finished third at the SKUSA Winter Series standings. Cameron Weinberg is moving up to Mini under the Nitro Kart tent. And SKUSA Winter Series Micro Swift champion Matias Orjuela (Praga) is jumping up to Mini for the WinterNationals. 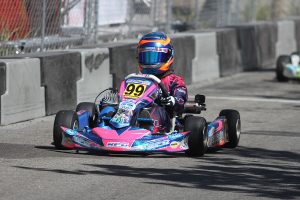 A new list of contenders are set for the Pro Tour level in Micro Swift, including Graham Trammell (Photo: EKN)

The youngest category of the SKUSA Pro Tour features a number of new names to the national scene. A number of last year’s contenders have graduated up, leaving for these young drivers to establish themselves as future SKUSA stars. Graham Trammell (Kosmic) was the 2018 California ProKart Challenge champion and is fresh off a sweep of the LAKC event last weekend. Texas ProKart Challenge 2018 champion Ethan Thomason (Parolin) is making his SKUSA Pro Tour debut on the weekend. Third generation driver Rocky Moran (Benik) is another notable name in the 10-driver field.