The 2019 season marks the 10th year of the Superkarts! USA Pro Tour. It all began in California with a trip to Sonoma for the inaugural event in 2010. Everything comes full circle as the Pro Tour kicks off the 10th season in the Golden State, making its first ever visit to the CalSpeed Karting facility in Fontana. The third edition of the WinterNationals moves cross-country from NOLA to outside the Auto Club Speedway, with 200 pre-registered drivers set to do battle on the newly revised ‘Grande’ circuit.

eKartingNews.com remains the official online partner for the SKUSA Pro Tour, having broadcast every race since its inception. Those karting enthusiasts not in attendance can listen from home or on the road to the EKN Live broadcast page at www.ekartingnews.com/live with EKN’s own Rob Howden providing the play-by-play call. This weekend’s broadcast is brought to you by Mad Old Nut Racing, Alan Rudolph Racing Academy and Courtney Concepts. Daily reports and updates on the EKN Social Media network will fill up your timeline throughout the weekend.

The first of two previews looks at all the shifterkart divisions along with the Master categories. 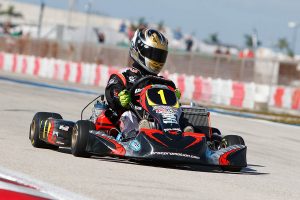 The 2019 SKUSA Pro Tour ushers in a new era for shifterkart racing with the IAME SSE 175cc engine becoming the headline powerplant. The engine made its 2019 debut at the SKUSA Winter Series in January and February. Names remained the same at the front as 2018 SKUSA Pro Tour champion AJ Myers and three-time SKUSA SuperNationals winner Billy Musgrave continued to be the drivers at the top of the results. Myers (MONR / Croc Promotion) won three of the four in Florida to claim the series title, with Musgrave (MRC / Aluminos) winning the third round after placing runner-up in the two opening rounds. Dating back to the Sunday round at the SummerNationals in August 2018, Myers and Musgrave have been the only winners at SKUSA events since. Myers won at New Castle, Musgrave scored victory at Streets of Lancaster Grand Prix and SuperNats, with the duo sweeping the Winter Series.

The two have solid challengers looking to dethrone them. Mathias Ramirez (PSL / Birel ART) is back to six-speed racing after placing third in the SKUSA Pro Tour standings back in 2017. SKUSA national #2 Kyle Wick (CRG Nordam) split up Myers and Musgrave in the title chase last year, coming off a solid rookie season at the Pro level. Hunter Pickett leads Gary Carlton’s GFC squad, making its SKUSA Pro Tour debut at the WinterNationals. Pickett is looking for a third straight season with a win at the SKUSA Pro Tour level.  RIGP King of the Streets winner Rory van der Steur (MRC / Tony Kart) is another looking for more success in his second Pro season. New to Pro is Andrew Budjdoso (MONR / Croc Promotion), who showed well in Florida, Challenge of the Americas 2018 champion Alex Keyes (PSL / Birel ART) and Prescott Campbell (MRC / Aluminos). 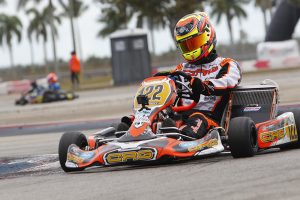 Max Hewitt is among the many contenders in Pro Shifter 2 (Photo: On Track Promotions – otp.ca)

The Semi-Pro division is also making the transition over to the IAME SSE 175cc engine for the 2019 season. Many of the same competitors who fought for wins and podiums in 2018 are returning with the new powerplant on their side. Among those returning include two of the championship podium – Blair Hosie and Michael Ilavia. Hosie (MRC / Aluminos) was quick all 2018, finishing the year with three podiums, including his first career victory at the SummerNationals. Ilavia (Crosslink / Exprit) came over to shifterkart after multiple years in single speed competition, finishing the year with a best result of runner-up at the SpringNationals. One driver eyeing on the title in 2019 is Max Hewitt (CRG Nordam). Another ‘TaG’ transfer shined in the second half of 2018, earning the Texas ProKart Challenge title and winning at the SummerNats in New Castle. With nearly half the field under the MRC tent, don’t be surprised if they sweep the podium at their home track. And the category is welcoming back Race Liberante (J3 / CompKart) to the driver’s seat, as the 2007 SuperNationals S5 runner-up is making his SKUSA Pro Tour debut. 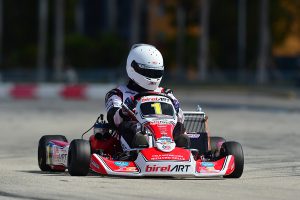 The ‘G1’ name has been with Superkarts! USA for a long time, dating back to the original SKUSA ProMoto Tour and the first years of the SKUSA Pro Tour. It returns with the introduction of the IAME SSE 175cc engine, as the Master category for shifterkart drivers. The ‘G1 Gladiator’ division is for those drivers 30+ piloting the SSE powerplant. SKUSA Pro Tour champions from 2018 are set to go head-to-head with three-time champ Jordon Musser (3G / Birel ART) and John Crow (MRC / Aluminos). Musser can make history with a fourth championship in 2019 while Crow is coming off a phenomenal season in the S4 Super Master division. Dan Monteiro (RPG / Tony Kart) is among the new drivers to test the G1 category at the SKUSA Winter Series, making his Pro Tour debut at the WinterNationals. Justin Peck (RPG / Kosmic) is a former SKUSA racer, joining the crowd in G1. 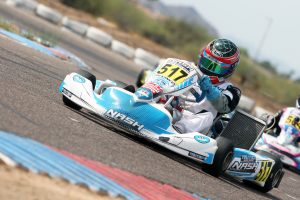 SpringNationals 2018 winner Matt Johnson is among those vying for the title in 2019 for X30 Master (Photo: EKN)

Numbers are a bit down in the X30 Master division heading into the WinterNationals, however, the talent pool remains. Former two-time champion Derek Wang (BBR / FA Kart) is among those returning from last year as Wang searches for a better result after missing the championship podium in 2018. Jess Peterson (PGR / Ricciardo) is the only top-three driver returning in 2019, carrying the SKUSA #3 national plate this season. Carlos Calderon (Aluminos), Jonathan Silva (CompKart) and Vatche Tatikian (PGR / Ricciardo) are among the veterans returning. Matt Johnson (Nash / FA Kart) won at the SpringNationals and starting out at his home track could signal a championship run for the now Master-level driver.

New for the 2019 season is the X30 Super Master division. The category is set to run within the X30 Master race group, with awards and championship set aside for those drivers above 45-years-old. Three drivers make the inaugural start with LAKC winner Jon Persing (Nash / FA Kart) joined by veteran DJ Ortiz (KRS / Tony Kart) and SoCal pilot Steve Wiener (Intrepid).

In total, there are five categories on the SKUSA Pro Tour for drivers over the age of 30-years-old. Two of them are the S4 Master and S4 Super Master Stock Moto divisions that feature the Honda CR125 powerplant. Unfortunately, there are only three total entries in the two Honda divisions for the WinterNationals. Miguel Garcia (Sodi) is the lone S4 with Ken Schilling (Aluminos) and Brett Harrelson (Nash / Sodi) as the S4 Super Master drivers.