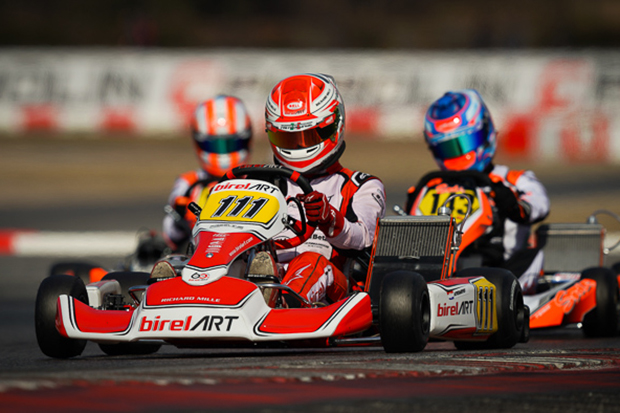 In the wake of the Winter Cup, the performances of the Birel Art Racing drivers were at their peak at the first KZ2 meeting of the WSK Super Master Series at the Lonato circuit. The results have improved compared to the previous week as Kremers mounted the Final podium while Irlando was in the top five and Dahlberg reached the top ten. Coluccio was also very competitive in OK.

“We can be satisfied with the weekend’s performance of this as it was better overall than last week,” said Ronni Sala, President of Birel ART Group. “Irlando and Kremers were able to fight with the best in the top three of KZ2, which is an important point early in the season, and Dahlberg continued to climb the rankings. Marseglia also did some great things in Qualifying and in the heats. This confirms that we have a very competitive chassis / engine package with TM Racing, in our second race. Needless to say, the team is extremely motivated to further improve our potential.”

Leonardo Marseglia clearly upped the pace this weekend with 14th in Qualifying and 5th place in a heat with the fastest lap. The smile of Alexander Dahlberg was a pleasure to see: the 5th place in the Prefinal, confirmed by 10th in the Final, were definitely something to cheer this promising driver.

Alex Irlando had a great run at the wheel of his new Birel ART / TM Racing kart. Visibly more comfortable than during his first race, he ensured very good Qualifying Heats before running 2nd place in the Final during a fierce battle. His 5th place is a reward appreciated by the team.

“I am very happy to be on the podium of Lonato, especially with the pain of a rib injury from a heat at the Winter Cup,” said Marijn Kremers in front of the cameras, before adding off the microphone: “It is very enjoyable for a driver to be able to fight using such efficient equipment. Confidence reigns in the team, we have a good working atmosphere and these first results encourage us to continue our efforts”. After two fastest laps and a win in the heats, Marijn fought a very good battle to finish 3rd.

Luigi Coluccio had three great heats in the top three, but a retirement increased his score before the Finals. He managed to reach 3rd position in his Prefinal, before being slowed down by a carburettor problem in the Final and finishing 8th. In OK-Junior, Cristian Bertucca ensured a strong Final comeback of 17 places to finish 12th after some disappointments during Qualifying.