Exciting Finals at the WSK Super Master Series in Lonato 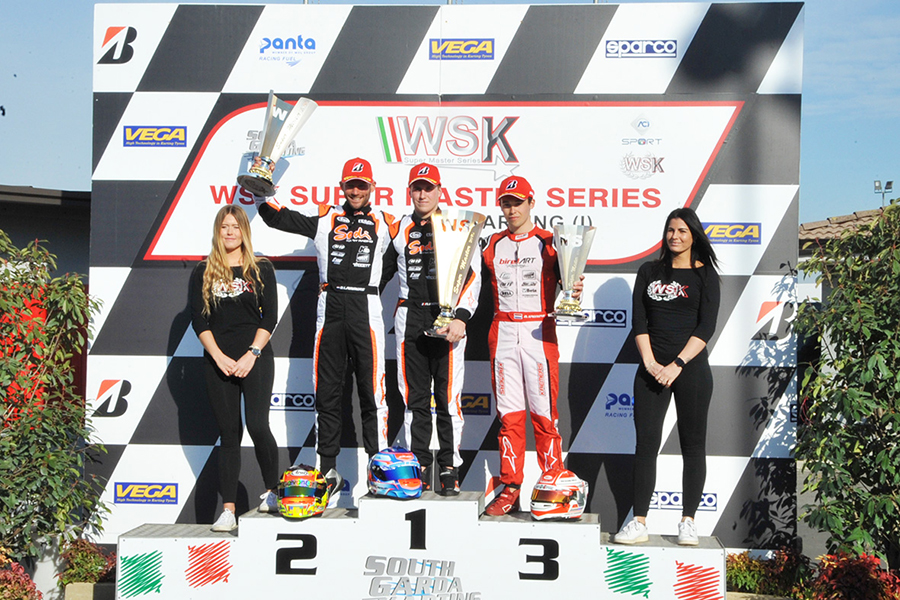 The drivers that took part in the races held today at the South Garda Karting circuit in Lonato (BS) have put in an exciting spectacle: the battles for positions have been on until the very last meters of the race and the victory has often been uncertain until the chequered flag. WSK Super Master Series is heading towards its second half of the campaign and will resume in Lonato with a lot of drivers hunting for the victory.

Adrien Renaudin had the best of more experienced drivers in KZ2 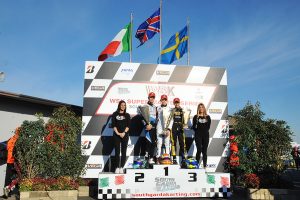 The Italian Paolo De Conto (CRG-TM-Bridgestone) led the pack until halfway through the Final, but eventually, the Dutch driver Bas Lammers (Sodi Kart-TM) took over the lead with his teammate from France Adrien Renaudin on his tail. De Conto had to settle for chasing the first two drivers that soon switched positions with P1 going to Renaudin. Once on top of the race, the French fended off Lammers who had been pushing but without finding the right chance to regain the lead. Renaudin pulled a deserved win leading Lammers. De Conto lost the third place to the Dutch Marijn Kremers (BirelArt-TM) when two laps were still to be run. The KZ2 classification is led by Lammers at 91 points, while Renaudin is two points short of him. Above, the podium of KZ2.

A Successful comeback for Dexter Patterson in OK

It has been a great racing day for Dexter Patterson (KR-Iame-Bridgestone) in OK. The Scot put in an unstoppable comeback from the fourth row in the Final, closing in on the leading group. The Italian Lorenzo Travisanutto (KR-Iame) was initially in the lead but then had to give his position to the French Noah Milell (Tony Kart-Vortex). Once caught by Patterson, the leading duo were overtaken in a few laps. Travisanutto managed to regain P2, while Milell struggled and lost several positions. The Swede Dino Beganovic (Tony Kart.-Vortex) secured therefore P3. Patterson confirmed to be the main rival of Travisanutto at 128 points thanks to the victory in Lonato. Travisanutto is leading the charts at 151 points. Above, the podium of OK.

An Unexpected victory to Jamie Day in OK Junior 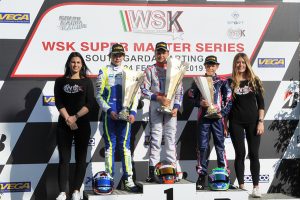 The OK Junior Final has been quite unpredictable: after the unexpected stop of Andrea Kimi Antonelli (KR-Iame-Vega), who had been leading early on, the victory has been an uncertain fight between Nikita Bedrin and Artem Severiukhin (both on Tony Kart-Vortex). A contact between the two made the two Russians go out at the second-last lap. The British driver Jamie Day (Exprit-Vortex) in their slipstream has been quick to react and avoid the two taking the lead and winning the race. Behind him, the Dutch Thomas Ten Brinke (FA Kart-Vortex) and the Russian Andrey Zhivnov (Kosmic-Vortex) claimed a deserved podium. Antonelli is leading the classification with 94 points and is followed by Ten Brinke at 90. Above, the podium of OK Junior.

Rashid Al Dhaheri gets another win in 60 Mini 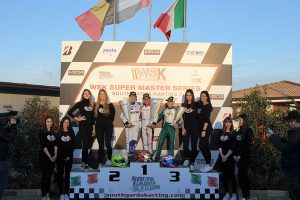 Rashid Al Dhaheri (Parolin-TM-Vega) led the Final from lights to flag, but the certainty of his second win in WSK Super Master Series arrived only at the chequered flag. The driver from the United Arab Emirates has been challenged by Singapore’s Akshay Bohra (Parolin-TM) first and by the Jamaican Alex Powell (Energy-TM) then. These two have been in turn attacked by the Belgian Ean Eyckmans (Parolin-TM) and the Italian Andrea Filaferro (Tony Kart-TM), that followed Al Dhaheri in the order in a red-hot final. Al Dhaheri is leading the classification at 176 points, while Eyckmans is second at 116. Above, the podium of 60 Mini.