Masterful Double for Energy Corse at the Winter Cup 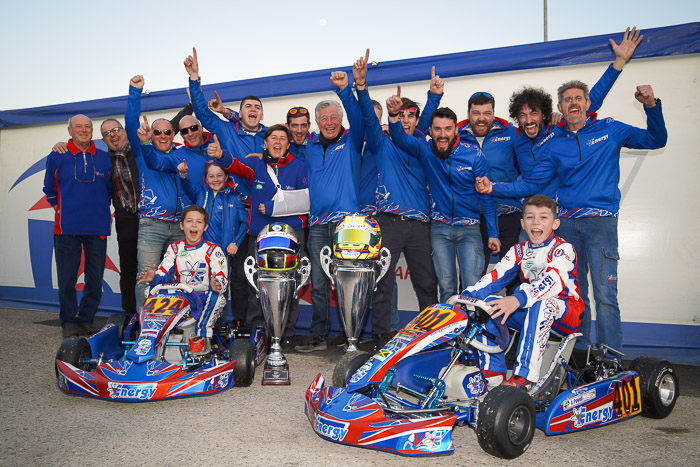 The season has definitely started strongly for Energy Corse with podiums on different continents and successive performances in Europe. At Lonato, Alex Powell and Kirill Kutskov produced a remarkable double at the Winter Cup in Mini Rok. Energy Corse is certainly one of the best teams in terms of training young kart drivers.

The spirit of competition, the hunger for victory and the positive atmosphere that characterises the Energy Corse team have again pushed the drivers and technical staff to give their best at Lonato during the Winter Cup. This benchmark event was meticulously prepared for by the team managed by Mick Panigada, who does not neglect a single detail, and especially not the human aspect.

“Whether they’re young as in Mini and Junior, or older like KZ2, we constantly strive to give drivers the answers they need to get better. The performance of the equipment is important, but effective exploitation of it is even more so. The race strategy is also continuously referred to during the meeting,” said the Italian team manager.

Powell wins in front of Kutskov in Mini Rok

Very competitive in 60 Mini with their TM engines, the drivers in Energy Corse colours have again progressed to the front in the Mini Rok category, equipped with Vortex engines. Racing at Lonato thanks to his prize won as the winner of the “Dubai O Plate”, Valerio Rinicella proved to be the fastest of the team in Timed Practice with a magnificent 2nd position. Then, his team-mate Alex Powell increased in speed. Ranked 3rd after the heats and 3rd in his Super Heat, the young Jamaican made his presence felt in the Final by taking the lead several times. He ended up winning the Final, watched by Gwen Lagrue, manager of the Mercedes AMG F1 Team young driver programme, who was impressed by the performance of the Energy Corse driver!

The other achievement of the day came from Russia’s Kirill Kutskov. Holder of the fastest lap of his Super Heat and starting 13th in the Final, he made a great comeback to reach 2nd place and join Powell on the podium. Not very lucky in the heats, Rinicella was 13th overall after setting the best lap of his Super Heat. Note also the superb 6th place by Davide Marconato of the New Technology Racing Team.

Energy Corse with the best in KZ2 and OK-Junior

With 98 entries and a very high standard due to the presence of many drivers usually racing in KZ, the KZ2 category highlighted the performance of the Energy Corse chassis. Especially for Emil Skaras. 10th in Qualifying and four times in the top five of the heats, the Swede showed that he was able to race on the pace of the best. His 13th place in the Final is very auspicious for the 2019 season. His compatriot Isak Sjokvist and the Estonian Kallasmaa Kaspar also managed to earn brilliant places among the finalists.

The Energy Corse team has confirmed its potential in OK-Junior with the fast Robert De Haan and Maksim Soldatov. The Russian confirmed his excellent qualifications with an 8th position in the Super Heat which predicted a good Final result. Alas, a collision at the start of the decisive race ruined everything. As for De Haan, he managed to get into the top six during the Final, before finding himself in the middle of fierce battles. With his 11th place, the Dutchman confirms that he will be a Junior to follow closely this season.

For the Italian brand, good news also arrived from the Energy Corse Australia team. In the first event of the Australian Championship, Kye Burke finished 2nd in the “Cadet 9” category, while Jessie Lacey placed 3rd in “Cadet 12”. More accustomed to the V8 Supercars, James Golding joined the fight with the regulars of KZ2 and came out with a magnificent 6th position!