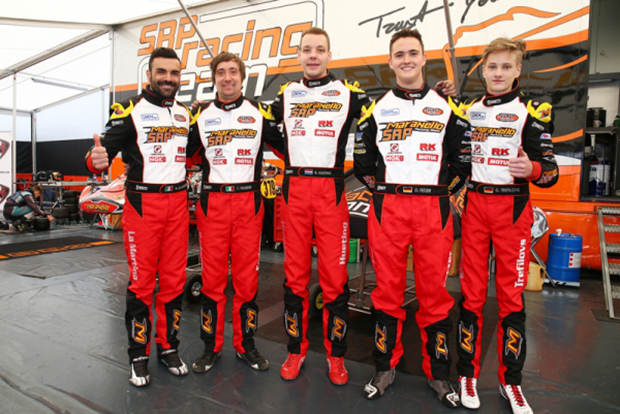 Maranello Kart had a great start to the season at the 24th Winter Cup putting in very good performances with team SRP Racing and SG Race.

Maranello Kart made an excellent debut of season 2019 in occasion of the 24th Winter Cup in Lonato, displaying high competitiveness especially in KZ2 With Fabian Federer of SRP Racing and Massimo Dante of team SG Race.

In KZ2 Fabian Federer made the quality of Maranello chassis and TM engine run by SRP Racing Team shine claiming an excellent and spectacular pole position leading 97 very competitive rivals. A total of 98 drivers were in fact present in KZ2 in Lonato, amongst these several International Champions. The Winter Cup set another participation record this year as a total of 310 drivers from 43 different countries contested the four categories KZ2, OK, OK-Junior and Mini Rok.

Fabian Federer posted the KZ2 pole position in 46.533s, and Massimo Dante was very fast too and was second in Series1 with a best lap completed in 46.587s. Not bad! Federer was unfortunately handed a very heavy penalty (10s +  5) in one heat and, despite three wins and the victory in the Super Heat, pushed the SRP Racing Team’s driver to the seventh place of the starting grid of the Final, while Dante secured the 10th position on the starting grid. The Final has been very exciting as Federer worked his way up the pack claiming a great P5, while Dante ended seventh.

Some hiccups in the heats and in the Super Heat prevented the other Maranello Kart’s drivers to qualify for the KZ2 Final instead. David Trefilovs, Francesco Galletto and Alessio La Martina managed to qualify for the Super Heat, but did not make it through to the Final, while Marius Zug, Brio Hueting e Dennis Fetzer ended their weekend after qualifying heats.

Mattia Simonini and Ariel Elkin got on track in OK-Junior, but did not make it into the Final: Elkin was 16th in Super Heat, while Simonini did not go beyond qualifying heats.

The results in Lonato’s Winter Cup have been positively welcomed at Maranello Kart. Luca Iannaccone commented the outcome of the race in this way: “The level of competition has been very high at the Winter Cup, as all the strongest drivers were present because the prestigious South Garda Karting circuit of Lonato will house the most important race of the season, that is the World Championship, next September. I have to say that this has been a very good chance for Maranello to test the material and the new chassis MK4 30/32 gave great results for the whole weekend with Fabian Federer.”