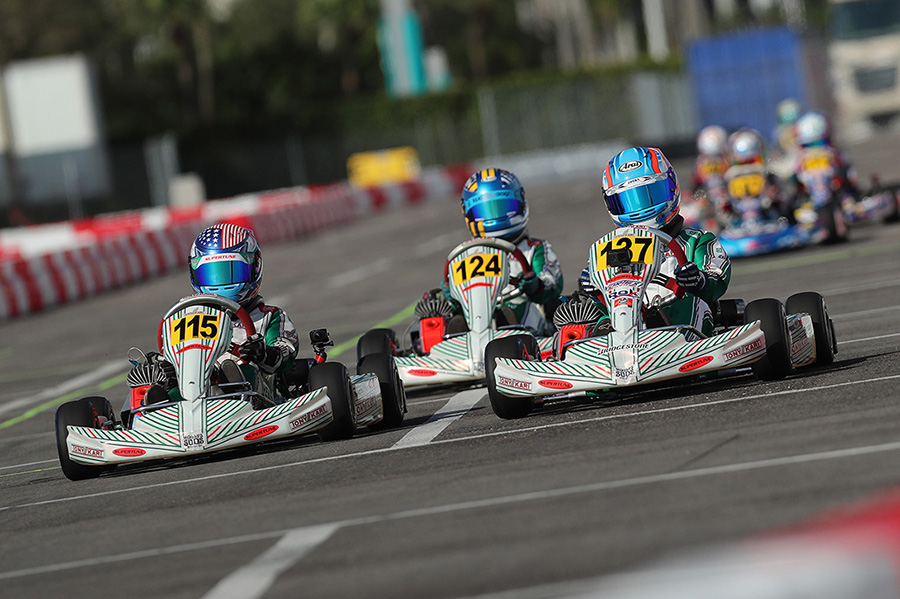 All three Supertune Mini ROK drivers battled at the front of the field (Photo: CKN)

Quickly becoming one of the premier teams in United States karting, Supertune proved that once again this weekend at the second round of the ROK Cup USA Florida Winter Tour. Claiming three podium results including a 1-2 finish in Vortex Mini ROK, Supertune and Tony Kart have been the dominant team and brand of the Mini classes throughout the first two months of the 2019 racing season.

Leading the way was multi-time 2019 race winner Kai Sorenson as his second place qualifying effort on Friday afternoon progressed into two first place results and one fourth place finish in the three heat races. Turning up the wick on Sunday, Sorenson claimed the prefinal win and pole position for the main event and went on to secure the weekend’s victory, his second win in as many weeks. Anderson Leonard made it a 1-2 finish for Team Supertune as he was able to turn his sixth-place result in the prefinal into a second place finish in the main event as Supertune once again rose to the occasion.

Team newcomer Cameron Weinberg had a great weekend aboard his new Tony Kart as he battled in the top-ten all weekend. Finishing as high as third in heat three, Weinberg put three Supertune drivers in the top-ten with an eighth place result on Sunday.

A pair of Supertune drivers would try their hand at the Vortex Micro ROK class as Karsyn Walter and Xander Reed battled at the pointy end of the field. For the second weekend in a row, Walters was never outside the top-three as her third place qualifying run turned into a win and a pair of second place finishes. Coming home third in Sunday’s prefinal, Walters leveled up in the main event to stand on the podium in second. Reed, another new driver in the Supertune program, quickly made an impact in the Micro ROK category. Hovering around the top-five throughout the weekend, the Tony Kart driver ended his weekend with a solid sixth place finish.

“Our Mini kart program is going really well as we have both the chassis and horsepower to run at the front of the field,” explained Ben Cruttenden. “Our results are speaking for themselves and the inquiries that we are getting from drivers on other teams is going in the right direction. I am excited to see what the rest of the year has in store.”

Jeremy Fairbairn, a rooking in the ROK Senior category, finished each and every official on track session in the top-ten this past weekend. Qualifying tenth, the Floridian was a model of consistency in the heat races finishing seventh, eighth and eighth heading into Sunday. The consistency continued on Sunday as an eighth place finish in the prefinal was elevated to a seventh place result in the main event in the talent-filled Senior category. Gerardo Casas entered the Masters ROK class and gained experience throughout the race weekend. Qualifying in the ninth position and running close to the top-ten in all of his heat races, Casas eventually finished his weekend in twelfth.

Cruttenden continued, “March is just around the corner and it is going to be a busy month. With races on both coasts of the United States, it is going to be a lot of logistics and travel to make it all work. In the end, it is all worth it to continue with our success.”