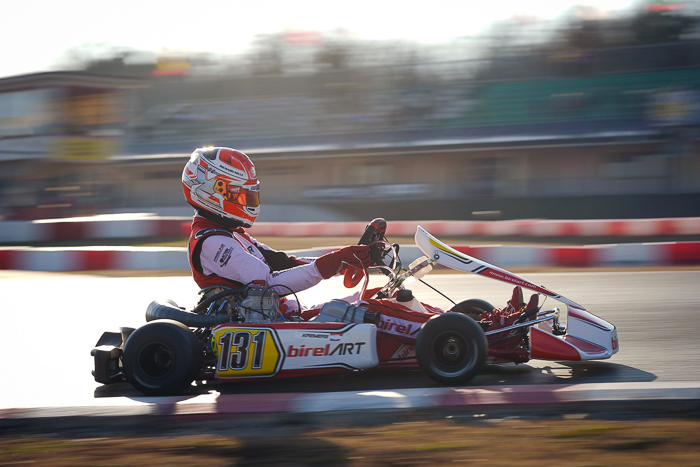 The performance was undeniably there at Lonato for the Birel ART Racing Team, in the three international categories of the Winter Cup. Satisfaction lit up the faces of the technicians from the Lissone factory and their drivers after very encouraging performances during the first big meeting of the 2019 season. The course of such a competition can often be disturbed by racing incidents, but the preparation work by the team during the winter has undoubtedly gone well.

“I’m happy with this Winter Cup,” said Ronni Sala. “This is the first big race of the year in which most of our drivers from our new line-up came together. I was pleased to see that we were performing well in KZ2, OK and OK-Junior with our TM Racing engines. It’s very encouraging to start the season this way, especially for our 60th birthday. While the competition was tough and the races did not always allow us to fully show our potential, we all know the uncertainties of racing. The main thing was to be in good shape for the rest of our programme and I am quite confident about it. I am sure that we will do better next week for the second event of the WSK Super Master series in which the KZ2 will also compete.”

Marijn Kremers had the best result of the team with his magnificent 4th position in the Final after a 10-place recovery. At this level, within a field of nearly 100 drivers, it is an outstanding feat. Alexander Dahlberg also showed great competitiveness, as did the newcomer Leonardo Marseglia, for his debut in 125cc gearbox. Of course, the retirement of Alex Irlando in the Final, victim of a slide on a trace of water, did not allow us to see him at work until the end, but this famous driver had the opportunity to appreciate his new equipment and to take his bearings for the next race.

Luigi Coluccio confirmed his speed in OK by posting the 3rd fastest time among the 70 drivers during Qualifying Practice and continued to progress at the forefront throughout the meeting. In the top three at the start of the Final, he lost some ground in fierce battles, but his performance remained very convincing.

The young OK-Junior drivers Cristian Bertuca, up from 60 Mini, and Elliott Vayron, for his international debut, perfectly fulfilled their mission of learning the category by putting in encouraging performances for their debut on track at this level.

It was also a big first for Julia Ayoub and Maya Weug, the two women selected by the Richard Mille Young Talent Academy last December. Maya was not far from qualifying for the OK Final, while Julia had everything to learn in OK-Junior.