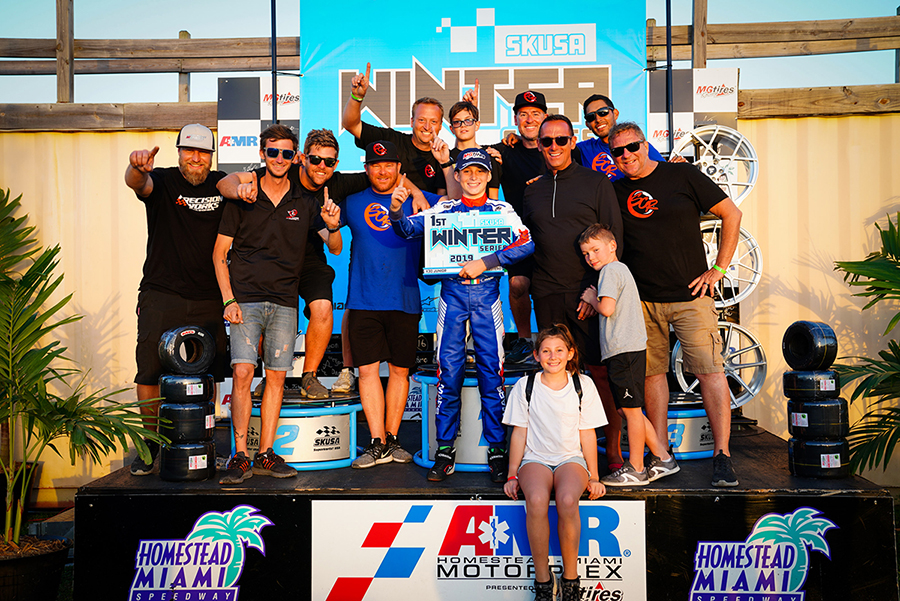 “To be able to win with one driver in the SKUSA program is a feat in itself but we were able to do it with three different ones,” explained Speed Concepts Racing Owner Mike Speed. “We also had 11 top-ten results this weekend. At the end of the day, the results and success of our program is the sum of all parts and the effort that is put forth.”

Claiming a second place podium result on Saturday, Luca Mars rose to the occasion on Sunday and turned his outside front row qualifying position into a main event victory at day’s end. Showing the speed and consistency to fight for several championships and major race wins in 2019, Mars will look to add to his win total next week in ROK Cup USA competition.

Canadian Justin Arseneau ended his SKUSA Winter Series with a pair of sixth place results as he moved up the grid from both Saturday and Sunday’s qualifying sessions. Sunday’s main event saw a five-position improvement from start to finish as well as the fastest lap of the race. Round one winner Luke Lange had a disappointing result on Saturday, being forced to retire due to contact, but rebounded on Sunday to finish P8.

IAME Mini Swift driver Paul Bocuse and Noah Baker ran inside the top-ten for the majority of the race weekend with Bocuse garnering the better of the two results. Claiming a fifth place finish on Saturday, the young driver narrowly missed the podium on Sunday, crossing the line in the fourth position en route to scoring the fastest lap of the event. Baker chased Bocuse across the line in Saturday’s main event to finish sixth, while Sunday he drove from a 14th place starting position to end his weekend successfully in ninth.

Canadian Ayden Ingratta, a late entry to the Mini Swift and Speed Concepts Racing program in Homestead, showed huge improvement since his first event with the team. Moving forward throughout the race weekend, Ingratta steered his Tony Kart forward from qualifying to the main event on both race days. The young Canadian driver left homestead with more experience, race craft as he claimed a pair of top-fifteen results, his best finishes with the SCR program.

X30 Masters driver Scott Roberts continued his front of the field presence in round three. Claiming two podium results in the opening two races of the series, Roberts continued his podium streak on Saturday as he turned his third place qualifying effort into a second place finish. Sunday morning saw the veteran racer qualifying his Tony Kart on the pole position and finish second in the heat race before falling back in the main event to end his series with an eighth place result.

Speed continued, “A huge shout out and thank you to our engine suppliers in the IAME program. Both Woltjer Racing Engines and Precision Works Racing Engines provided unbelievable power and support throughout the series and have been tremendous partners in our program.”

Next on the docket for Speed Concepts Racing will be the ROK Cup USA Florida Winter Tour as five drivers will do battle on the temporary circuit on the grounds of the Hard Rock Stadium in Miami Gardens, Florida. Justin Arseneau, Luca Mars and Kyffin Simpson will battle in Vortex ROK Junior while Paul Bocuse and Ayden Ingratta will throw their hat in the mix in Vortex Mini ROK.