Four podiums, one win and one series championship this past weekend 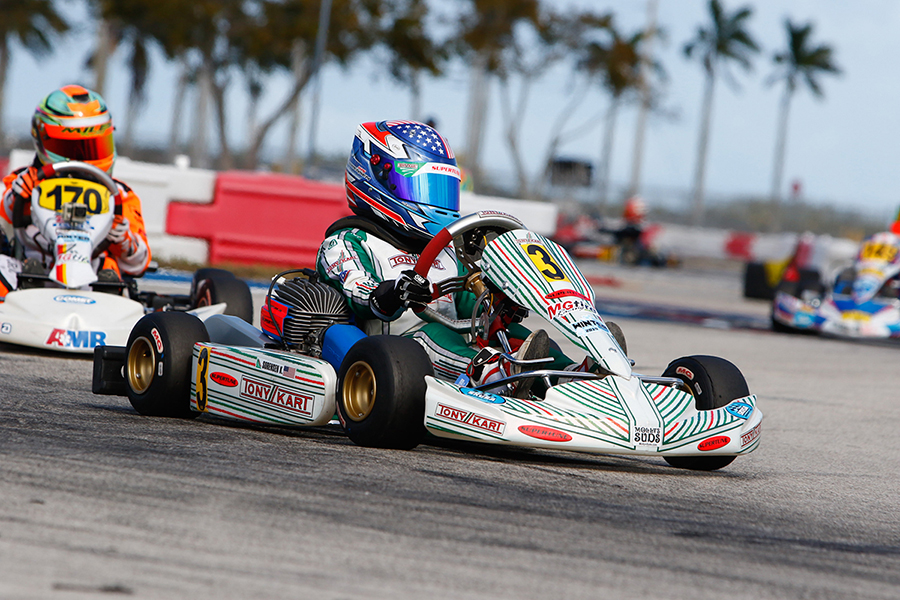 It was a championship winning weekend for Supertune as the Indiana based team led Tony Kart driver Kai Sorenson to the Superkarts! USA (SKUSA) Winter Series championship. On the strength of consistent results, including a victory in the series finale on Sunday, Sorenson was a major part of the four podium, one main event win this past weekend at the AMR Motorplex in Homestead, Florida.

“It was another great weekend within the Supertune program,” explained Ben Cruttenden, Owner of the elite level karting program. “We had four drivers this weekend and everything progressed very well. While Karsyn, Kai and Anderson were in the top-ten in almost every session, Jeremy Fairbairn showed front of the field speed and was the biggest mover in Saturday’s main event.”

Kai Sorenson had another impressive weekend as he was never outside the top-three on the results sheets in any official on track session. Qualifying on the outside of the front row for Saturday’s wheel-to-wheel action, Sorenson claimed the prefinal victory before standing on the third step of the podium in the main event. Disappointed that he was unable to come up with the race win, renewed energy on Sunday morning saw a second place qualifying effort turn into a prefinal win, main event victory and the title of Superkarts! USA Winter Series Mini Swift Champion.

Anderson Leonard flexed his muscles throughout the weekend as he consistently improved in each and every session. Turning his ninth place qualifying effort into a fourth place finish in Saturday’s main event, Leonard was eventually removed from the results for a minor paperwork infraction on his pre-race technical inspection documents. Sunday saw Leonard qualifying in the third position and be part of a Supertune 1-2 finish in the prefinal. With wet weather moving into the area for the day’s main events, Leonard managed to secure a sixth place finish and will shift his focus to the next event this coming weekend.

IAME Micro Swift driver Karsyn Walters was a model of consistency throughout the weekend, as she never ran outside the top-three, nearly mirroring Sorenson’s Mini Swift progress. A steady second place run on Saturday saw the young female qualify on the outside of the front row, claim the second position during the prefinal and mirrored those efforts in the day’s main event adding another podium for Supertune. Sunday would see much of the same for Walters as she went third, second and third in her on track sessions for her first Superkarts! USA double podium event weekend.

Reigning X30 Junior SuperNationals Champion and X30 Senior rookie Jeremy Fairbairn had a morning to forget on Friday. After being classified in the 26th position after qualifying and 30th after a penalty in Saturday’s prefinal, Fairbairn was the biggest mover in the main event, passing 18 competitors on his march forward to a 12th place finish. Sunday was a role reversal for the Floridian driver as the morning qualifying session brought increased speed to his Tony Kart chassis and a top-ten result, which carried through to the prefinal. The main event on Sunday would not be kind to the senior rookie as Fairbairn ended his weekend with a 31st place finish after contact on the opening laps.

No time off for Supertune as the team will travel to Miami Gardens, Florida for the second round of the ROK Cup USA Florida Winter Tour this coming weekend at the Hard Rock Miami Stadium.