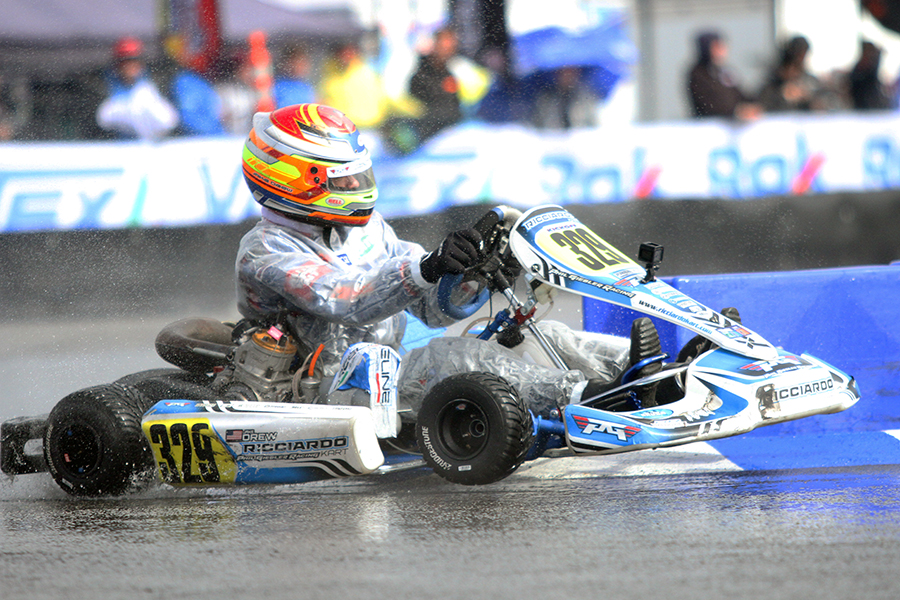 The final day of action was a wet one for Challenge of the Americas at the CalSpeed Karting circuit in Fontana, California. While rain moved away on Saturday, the clouds remained in the area throughout Round Two on Sunday, including some heavy precipitation during the main events. Series officials braved the elements as competitors fought for the fast way around the soaked ‘Grande’ circuit.

One of the hardest hit races on the day was the Senior Rok main event. A strong cell of rain washed over the area during their main event, pushing the limit of man and machine with massive standing water areas in the typical racing line. Jake Drew (PGR / Ricciardo) was a two-time COTA winner in 2018 at CalSpeed, missing out on the victory Saturday due to a broken rear bumper while leading. He went after the wet track strong all day, leading qualifying and winning the Prefinal. Drew dropped to fifth early in the challenging conditions, allowing Ethan Barrett (Kosmic) and defending champion Jim McKinney (Ruthless / Exprit) taking over the point. Drew fought his way back, quicker by over one second a lap then any other driver to regain the top spot, driving away to a two-second victory. McKinney settled for second with Colby DuBato (PGR / Ricciardo) in third. Bijoy Garg (SSM / Exprit) was fourth with Lodovico Laurini (Vemme) in fifth. 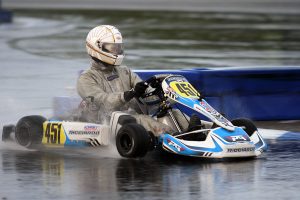 The last class to hit the track with the rain finally stopping was Shifter Senior Rok. The track still had massive standing water in places, and kept the 21-kart field on their toes. No driver stood out throughout the day with veteran Brian Keck (RWR / CRG) scoring the pole position and Prescott Campbell (MRC / Aluminos) winning the Prefinal. Callum Smith (FW / CompKart) grabbed the holeshot and showed the way with Nicky Hays (PGR / Ricciardo) moving up to his bumper. On lap nine, Smith had his race come to a close at the end of the front straight, handing the lead over to Hays. Leading the last three laps, Hays scored his second COTA victory of his career. Kol Bailey (GFC) was in line to place second, dropping out just prior to the white flag, giving veteran Ron White (RWR / CRG) the second step of the podium with Campbell fighting back to third. Keck and Enzo Prevost (Aluminos) were fourth and fifth.

Neil Joseph (Cameron / CRG) was able to negotiate the heavy wet conditions in the Shifter Masters Rok main event for his first career victory. Rod Clinard (CRG Nordam) had the top spot in hand through qualifying and the Prefinal. The wetter conditions slowed his pace, with Kalvin Chen (FW / CompKart) leading for much of the race. Joseph kept pace, and grabbed the lead with three laps remaining. Posting fast laps of the race in the final circuits, Joseph drove away to his first Challenge victory. Chen held on for second with Clinard completing the podium in third. Lonnie Hochstetler (Tony Kart) and Sean Bond (FW / CompKart) were among the last remaining karts on track to finish fourth and fifth. 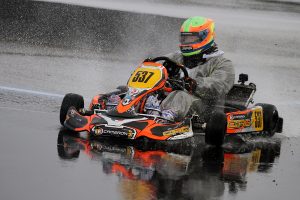 Erik Jackson (Vemme) was in his elements throughout the day in the Masters Rok division. The defending series champion swept the action on the day to earn his first victory for the 2019 season. Jackson fought off Derek Wang (FTK / Tony Kart) to score the win, with Nick De Graaf (Vemme) coming up to grab the third spot of the podium from Paul Bonilla (FTK / Tony Kart). Chad Wallace (GKH / Birel ART) drove to a fifth spot in his return to the series.

That elusive Challenge victory still remains out there for Junior Rok driver Ethan Ho (APM / OTK). Ho was the top driver throughout the day, setting fast time in qualifying and winning the Prefinal. Ethan led the main event with William Ferguson (SSM / Exprit) on his bumper. The two ran different line around the wet course throughout the 13-lap Final. Coming to the white flag, Ho was caught up by a lap kart, allowing Ferguson to escape with the lead. Ferguson went on to score his first Challenge victory as Cole Morgan (Tony Kart) slipped past Ho for the second spot. Saturday winner Jonathon Portz (FA Kart) was fourth with Liam Letzsch (FA Kart) in fifth. 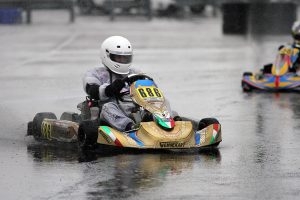 Another driver scoring his first COTA victory was Jackson Dunn (FDM / CompKart) in the Senior 100cc class. The top qualifier struggled in the Prefinal, but held on to finish fifth as Kyle Hayner (Kosmic) to the race win. Hayner suffered opening lap issues, dropping down to the tail of the field as Adam Kasick (FDM / CompKart) and Dunn jumped out front. The two measured each other up while avoiding the heavy puddles on the circuit. The final two laps were back and forth, corner-to-corner until the final lap. Dunn was able to get out of the tight hairpin better, as Kasick bogged down. This gave Dunn a clean run to his first checkered flag at the Challenge Kasick settled for second with Colby DuBato (PGR / Ricciardo) in third. Hayner fought back to fourth with Logan Calderwood (Tony Kart) in fifth. Jimmy Gregory (K&K) lasted the weekend, celebrating a second victory in the Masters 100cc class.

Enzo Deligny (Tony Kart) was on cruise control in the Mini Rok division to grab his first Challenge victory. Deligny qualified second behind Anthony White (CRG), jumping out to a big win in the Prefinal. It was the same in the Final, driving away to an 11-second advantage after nine laps. Saturday winner Logan Toke (Top Kart) settled for second, ending his win streak at COTA CalSpeed at three wins. Ethan Thome (Vemme) grabbed a spot on the podium in third with Christian Cameron (Tony Kart) and White completing the top-five. 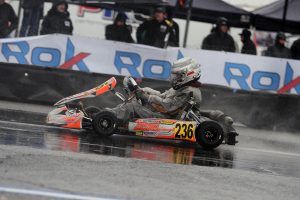 Going two-for-two on the weekend was Filippo Sala (Vemme) in Micro Rok. The Saturday winner was able hold off a late charge from top qualifier Zachary Walrod (Benik), who fell to the tail of the field at the start and charged his way forward with fast laps of the race. At the line, Walrod came up short by 95 thousandths at the line with Sala earning his second victory. Gage Jarvis (Benik) bounced back from a DNS in Saturday’s main event to claim the third spot on the podium with Cypress Andruss (Birel ART) and Sydney Cassels (Vemme) rounding out the top-five.

The championship chase is underway for Challenge of the Americas as the program returns to action on March 8-10 as it returns to the Musselman Honda Circuit in Tucson, Arizona for Round Three and Four.