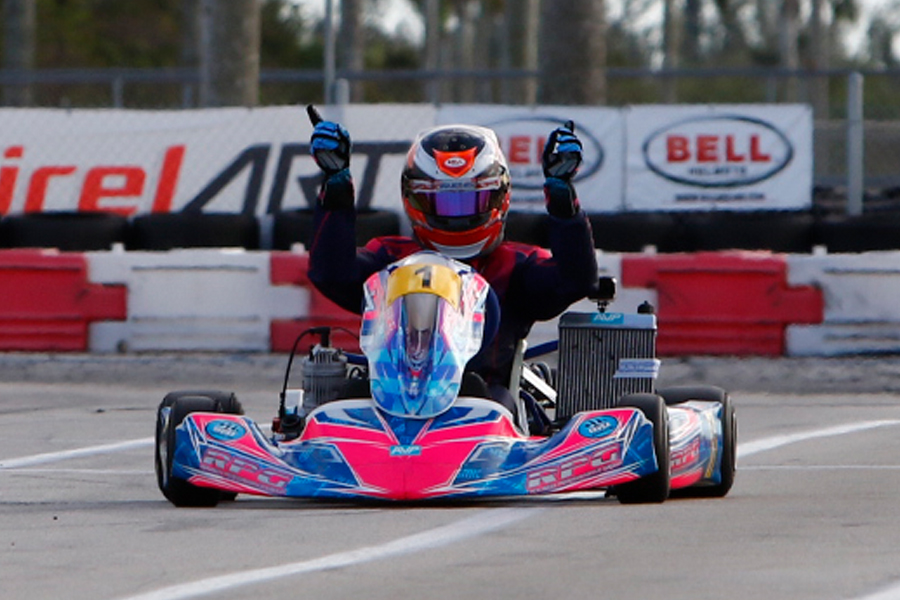 The expected excitement of the third round of the SKUSA Winter Series did not disappoint, as the racing was epic in a majority of the categories. Run in the reverse direction as the opening rounds in January, the 12-turn AMR Homestead-Miami Motorplex Presented by MG Tires presented a new challenge as multiple passing opportunities quickly emerged. Three-time SKUSA Pro Tour X30 champion Ryan Norberg cemented his reputation even further by recovering from contact-filled opening laps that shuffled him from pole to sixth, working back to the lead to score a stunning triumph. In Pro Shifter, MRC’s Billy Musgrave broke through for his first win after point lead AJ Myers (Croc Promotion USA) suffered a rear sprocket failure while leading in the main. The third storyline centered on the masterful performance by Canadian Mackenzie Clark (Prime Powerteam / BirelART), who positioned himself in the lead trio in X30 Junior and then managed the race with precision, moving to the lead in the late-going to score his maiden national level victory.

The PSL Karting X30 Senior battleground was as exciting as ever, with CRG Nordam driver Olin Galli laying down the fastest lap time in qualifying with a 47.025-second lap. Rolison Performance Group’s Patrick Woods-Toth was second to maintain his momentum from the opening rounds in January, while Nash Motorsportz’ Christian Brooks (CRG) was third. Reigning SKUSA Pro Tour champion Ryan Norberg (RPG / Kosmic) timed in fifth, right behind reigning World Champion Lorenzo Travisanutto (Kartsport North America / Kart Republic). Norberg moved to the lead in the Prefinal, topping Brooks and Travisanutto. In the final, Norberg led from the pole but the opening laps were chaotic as the #1 plateholder got a little defensive early. Brooks led a stream of drivers who pushed the reigning SKUSA Pro Tour champ back to sixth after the first two laps, but once he reset his baseline, the storyline began to develop. Once settled and back in the rhythm, Norberg went to work getting back to the front as he started picking off drivers one by one. After getting to third, Norberg displaced his team Woods-Toth back to third and then reeled in Brooks, who looked good up front. RPG’s new recruit then overtook Brooks to assume a lead that he would not relinquish. Norberg posted the fast lap of the race in the process and won by 0.532 seconds over Brooks and Woods-Toth. CRG Nordam drivers Austin Garrison and Olin Galli finished fourth and fifth. 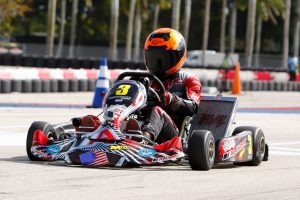 Mad Old Nut Racing / Croc Promotion USA drivers AJ Myers and Andrew Bujdoso got the day off to a positive start by qualifying 1-2 in Mad Old Nut Racing Pro Shifter, but Myers would not continue that streak in the Prefinal and Final, succumbing to mechanical difficulties that included a broken coil wire and a spun rear gear sprocket. After dominating the action in January, Myers will have to fight back on Sunday in an attempt to grab back the Winter Series championship. Billy Musgrave (MRC / Aluminos) qualified fourth behind Mathias Ramirez (PSL Karting / BirelART) and quickly moved to the front in the Prefinal, and he led early in the main. Myers bounced back from his Prefinal DNF to attack immediately, snatching back the lead in the early going. When Myers made another early exit, Musgrave took off to control the race until CRG Nordam’s Kyle Wick went on the offensive to make it exciting. Wick pushed hard over the final laps, but the #2 plateholder came up just short in his bid, needing another lap to truly fight for the lead. Musgrave held back Wick at the line, scoring a scant 0.060-second victory. Ramirez scored another podium finish in third, while CRG Nordam drivers Pedro Piquet (CRG) and Max Hewitt (CRG) capped the top-five. 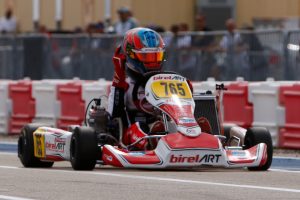 Canadian Mackenzie Clark has emerged as a top Junior contender for 2019 following an impressive performance to win in X30 Junior in Homestead
(Photo: OnTrack Promotions)

Canadian Mackenzie Clark (Prime Powerteam / Birel) turned in his best career performance in Rolison Performance Group X30 Senior, slipping past top qualifier Diego Contecha (Tony Kart) late in the 22-lap final to assume the lead. Speed Concepts Racing pilot Luca Mars (Tony Kart) won the Prefinal and led early in the main event from the pole but, in the end, Clark was the driver to beat after biding him time in third. The lead trio pulled away quickly to fight it out amongst themselves and in the late going, Clark followed Contecha past Mars in turn two to ignite his charge. Clark dogged Contecha and then made his move for the lead, pacing the remaining laps with consistent lap times that allowed him to pull away as Contecha became focused on defending from Mars. At the end of the 22-lap content, Clark crossed the line with a 1.167-second advantage to win over Mars, posting his first national event victory. Contecha was overrun by Mexican CRG driver Noel Leon on the final, dropping to fourth in the final tally. Leon had issues in qualifying and started dead last in the Prefinal, but he was quickly on the attack, posting the fast lap to advance from 45th to 16th. In the final, he was again on the march, again posting the fast lap as he reeled in the lead trio from the midpoint on. The last lap pass to steal third from Contecha certainly paves the way for a run for the win on Sunday. 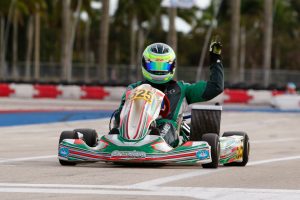 In Chuck G Fabrication X30 Master, point leader Rodrigo Piquet (Kart Mini) qualified on pole and finished second to primary challenger Renato Jader David (Orsolon Racing / Tony Kart) in the Prefinal. The stage was set for Piquet and David to challenge for the race win, but Piquet was out on lap 2 in turn eight, leaving the door open for David to run away unchallenged to a 3.002-second victory. Scott Roberts (Tony Kart) added a second-place finish to the pair of third-place results he logged at the opening rounds in January, keeping himself in the battle for the overall championship. British native Martin Pierce (COMPKART) finished third in the final tally, outgunning a late-race charge by Texan Miguel Mier (Crosslink Competition / Tony Kart). Salvatore Sparacio (Solo Kart) rounded out the top-five.

Late Apex Kartsport KA100 point leader Mateo Rubio-Luengo (Parolin) topped both qualifying and Prefinal action but, in the 22-lap main, Santiago Biagi (Exprit) emerged as the driver to beat as Rubio-Luengo did not have the necessary pace and finished fourth in the final tally. The driver to watch in the main was Annie Rhule, who was on an absolute roll piloting a new chassis for Solo Kart USA. Rhule closed consistently over the second half of the race, slipping past Bryson Morris (Kart Republic) to sit second. Rhule needed another lap to truly attack for the win, as Biagi crossed the line with a 0.059-second advantage. Morris completed the podium in third, while Jimmie Lockhart (Kart Republic) finished fifth behind Rubio-Luengo. 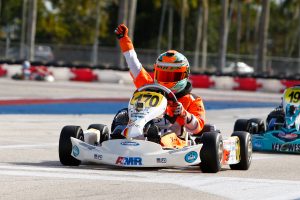 Kartsport North America’s Christian Miles (Kart Republic) was the star of the show in the Orsolon Racing Mini Swift category after qualifying 12th, moving to sixth in the Prefinal. Miles turned the fastest lap of the main event as he powered his way forward throughout the 20-lap race, working through Kai Sorensen (Supertune / Tony Kart) and Jakub Kolar (Formula K) to take the lead and an eventual 0.260-second victory. Anderson Leonard (Tony Kart) finished fourth ahead of Max Garcia (Kartsport North America / Kart Republic) in fifth.

Matias Orjuela (Parolin) qualified third in Medstep Racing Micro Swift, but he quickly returned to the point in the class, winning both the Prefinal and Final. Round 2 winner Beckham Jacir (FA Kart) was third in qualifying but exited the Prefinal early, after just eight laps, eliminating one of Orjuela’s primary challengers for the win. In the 20-lap main event, Orjuela paired up with Karsyn Walters (Tony Kart) to pull away, but the Parolin driver eventually extended the gap to win by 2.358 seconds. Texas ProKart Challenge driver Oscar Iliffe (Tony Kart) ran in the top-five all weekend and pushed to third in the final, completing the podium. Enzo Vidmontiene (Tony Kart) and Salim Hanna (Tony Kart) were fourth and fifth, respectively.

In the Rysa Racing Briggs 206 classes, TS Racing’s Colin Warren (VLR) won in 206 Senior over Jack Copeland. Frankie Barroso (Birel) made a last lap pass to beat out Zack Skolnick (Tony Kart) and Austin Morrie (Comet) for the final step on the podium. In 206 Masters, Canadian Eli Yanko (Tony Kart) came back from losing a Round 2 win to a loose bumper DQ to get back into the championship battle with a win over Dan Breitenstein (Birel). Andre Duek (Tony Kart) completed the podium.

The SKUSA Winter Series will crown its champions on Sunday with the final round of the four-race series.