Becklin and Pettinicchi score debut victories opening round in CalSpeed 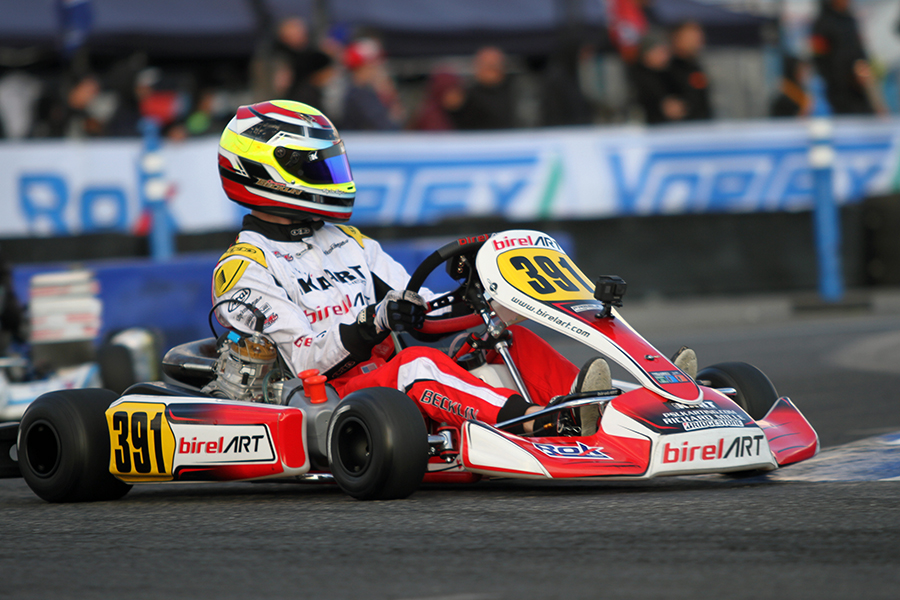 The 2019 Challenge of the Americas kicked off at the CalSpeed Karting facility in Fontana, California. Following a full day of perfect weather on Friday, Saturday began with rain in the area, lasting until qualifying and causing a wet track until halfway through the qualifying sessions. A mostly cloudy but windy weather covered the circuit as the rest of the day was based around timed Prefinal and Final sessions to end just before the sun set over the Pacific Coast. The first winners in the nine categories were decided on the day, setting up for the first of six rounds in the championship chase to decide the 2019 champions.

Cooper Becklin was able to come away with his first victory in at The Challenge win the Senior Rok division. The Senior rookie scored the  win in the Prefinal after last year’s double winner Jake Drew (PGR / Ricciardo) was taken off track for a rear bumper detached. It was the same in the Final as Becklin (GKH / Birel ART) ran out front until challenged by a charging Drew, who came up from 15th on the grid to fight for the victory. As they fought for the lead, Drew had his rear bumper detach once again, thus receiving the meatball flag before the white flag. That allowed Becklin to cruise to his first series victory by three seconds over Colby DuBato (PGR / Ricciardo). Alex Siragusa (FW / CompKart) completed the podium over top qualifier Ethan Barrett (Kosmic) with last year’s champion Jim McKinney (Ruthless / Exprit) rounding out the top-five. 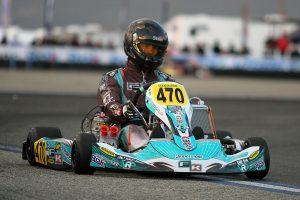 It was a complete sweep on the day for Zach Pettinicchi (VRP / Formula K) in the Shifter Senior Rok division. Pettinicchi scored fast time in qualifying before driving away to victory in the Prefinal and Final. Nicky Hays (PGR / Ricciardo) drove his way to the second spot with veteran driver Brian Keck (RWR / CRG) securing the third spot on the podium. Robert Heck Jr. (CRG) and Jason Pettit (GFC) completed the top-five.

It was zero to hero in Shifter Masters Rok with Rod Clinard (CRG) storming his way throughout the day to the victory. A missing transponder cost him a timed lap in qualifying, and started from 14th in the Prefinal. The CRG Nordam driver climbed his way up to third, and moved up to the second spot on the grid after Prefinal winner Nick Firestone (Ruthless / DR Kart) was docked 10 seconds for avoidable contact with Vivek Tandon (DR Kart). Clinard grabbed the holeshot and drove away in the Final to a four-second advantage. Firestone won the battle for second over Tandon to complete the podium with Nathan Stewart (Sodi Kart) fourth and Prefinal winner Michael Guasch (GFC) fifth. 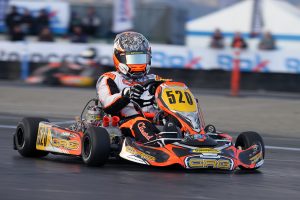 A three driver battle formed in the Masters Rok Final with Prefinal winner Billy Cleavelin (RPG / Kosmic) joined by top qualifier Derek Wang (FTK / Tony Kart) and former series champion Paul Bonilla (FTK / Tony Kart). Cleavelin was able to lead all 17 laps for the victory, but not without heavy pressure from Bonilla in the closing laps. Wang sat there in third, waiting for a spot to move ahead. Defending winner Erik Jackson (Vemme) and Nick De Graaf (Vemme) completed the top-five, with De Graaf up 10 spots from a DNF in the Prefinal.

Jonathon Portz (FA Kart) came out as the driver to beat in the dry conditions in Junior Rok. After qualifying fifth in the wet conditions, Portz emerged the winner in the Prefinal before driving away to a four-second advantage in the Final. The battle was for second with Ethan Ho (APM / OTK) edging out William Ferguson (SSM / Exprit) and Cole Morgan (Tony Kart), who locked up fast lap of the race on the final circuit. Top qualifier Liam Letzsch (CBM / FA Kart) rounded out the top-five. 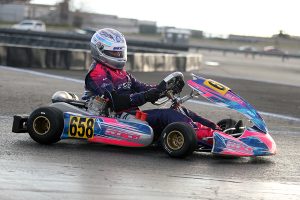 The inaugural Final for the Senior 100cc category was shaping up to be a great fight to the very end. Adam Kasick (FDM / CompKart) had other ideas, driving away from the pack and scoring the victory. Prefinal winner Everest Fedler (FDM / FA Kart) led until about halfway when last year’s PKRA double Masters Rok winner Kasick took over the lead. Racing for second allowed Kasick to get away to take the inaugural victory. The battle for second was won by Kyle Hayner (Kosmic) over Colby DuBato (PGR / Ricciardo) as Fedler dropped to fourth ahead of Cooper Becklin (GKH / Birel ART). Jimmy Gregory (K&K) went unchallenged in the Masters 100cc division.

The Mini Rok class looked to be Enzo Deligny (Tony Kart) to have. Scoring the fast lap in qualifying and the Prefinal, Deligny led the field to the green flag. Logan Toke (Top Kart) started from the outside of row one, and jumped out to the lead. Deligny and Parker DeLong (Benik) jumped in behind. Toke was a little bit quicker, lap after lap, and was able to pull away by himself. At the checkered, it was a three-second advantage as Toke won his third straight in COTA competition at CalSpeed. Deligny won second with DeLong coming across in third, but penalized two positions for contact. That promoted Anthony White (CRG) to the third step for his first podium in his Challenge debut. DeLong ended up fifth behind Patrick Molnar (Kart Republic), who put in a solid drive from 17th after placing second in the Prefinal, only to be removed from the results for a tech issue. 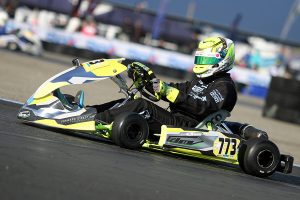