Florida program wraps up in Miami this weekend 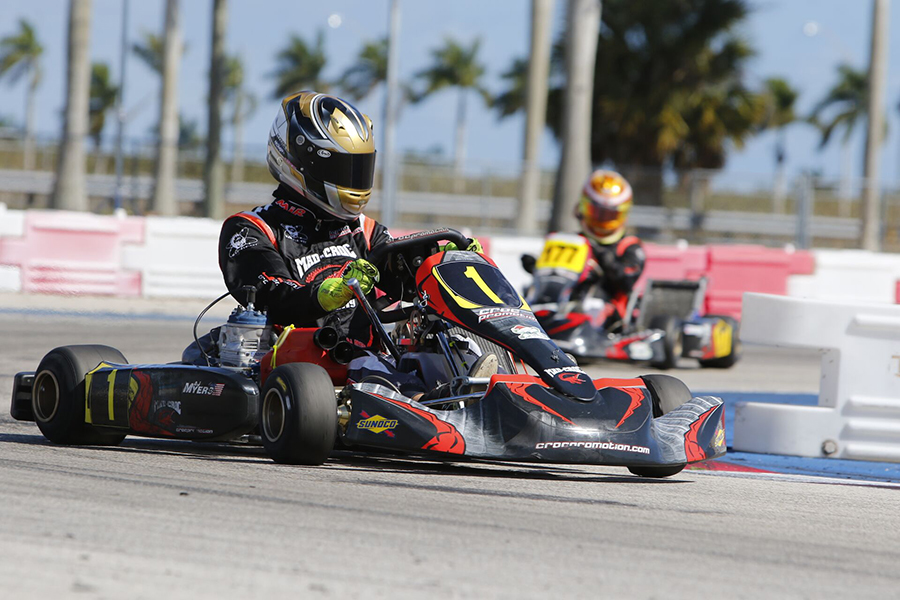 For the second straight year, Superkarts! USA has launched its coast-to-coast national season with their Winter Series in Florida. The organization launched the new ‘pre-season training’ program in 2018 and drew incredibly strong numbers, and the momentum continued in January with over 230 entries battling it out over the two days of competition. The drivers and teams have returned to AMR Homestead-Miami Motorplex Presented by MG Tires for the third and fourth rounds of the series, which will crown the champions. The primary candidates made themselves known during the opening weekend, but with the track being run in the reverse direction this time around, all bets are off.

A world karting champion and multi-time SKUSA Pro Tour title winner led things in the X30 Senior division during the opening weekend of the SKUSA Winter Series. Lorenzo Travisanutto (KSNA / Kart Republic) and Ryan Norberg (RPG / Kosmic) split the victories for the opening two rounds. Norberg led the majority of the weekend, with the exception the final lap of the Sunday main event as the Italian slipped past for the victory in Round One. Norberg leading all but that one session has put him at the top of the standings with Lorenzo trailing by 50 points. Canadian Patrick Woods-Toth (RPG / Kosmic) trailed Norberg during Sunday’s main event to score his first SKUSA podium, putting him third in the standings. Fellow Senior rookie Arias Deukmedjian (LEM / Praga) finished third both days to enter the weekend fourth in the standings, only 90 points out. Similar to the first event, this weekend’s field contains a number of high profile drivers and Senior rookies set to make a mark as the 2019 season is young and fresh. Among those entered is former SKUSA Pro Tour winner Braden Eves, who is making a return to his roots, jumping back in with VemmeKart USA.

The Speed Concepts Racing team scored both victories in the X30 Junior division with Luke Lange (Tony Kart) and Justin Arseneau (Tony Kart). Lange was inside the top-two spots in both Prefinal and Finals, and leads the championship chase heading into the weekend with a 109-point advantage. Arseneau had issues in the Saturday main event, and therefore sits eighth in the standings. SCR teammate Luca Mars (Tony Kart) sits second in the standings with Junior rookie Jeremy Fletcher (JZR / Kosmic) in third after his first podium in Round Two. Santiago Trisini (KSNA / Kart Republic) and Diego Contecha (Orsolon / Tony Kart) were the fourth and fifth different drivers to stand on the podium during the weekend to sit fourth and seventh in the title chase, respectively. Polish driver Tymoteusz Kucharczyk (Parolin) and Joey Atanasio (Mad Old Nut / Tony Kart) sit between them in the chase.

Jordon Musser (PSL / Birel ART) swept the action in the new Master Shifter category, featuring the 175cc IAME SSE powerplant. Musser went unchallenged in every session in the opening weekend, and is looking to match that to close out a possible championship. Luke Bhola (MRC / Aluminos) sits second in the standings with Dan Monteiro (RPG / Tony Kart) in third and Brett Harrelson (Nash / CRG) in fourth. All earned a podium finish on the weekend with Bhola grabbing a third on Saturday and a runner-up to Musser om Sunday.

Rodrigo Piquet and Renato David split the victories in the X30 Master class to be the top two in the championship chase. Piquet (Kart Mini) won Saturday with David (Orsolon / Tony Kart) scoring the win on Sunday. Piquet has the advantage thanks to his two fast-lap bonuses from the main events, leading by 30 markers over Piquet. Florida driver Scott Roberts (SCR / Tony Kart) finished third both days to only be 90 points out of the top spot in the chase. International star Martin Pierce (CompKart), who now resides in South Carolina, is making his SKUSA Winter Series debut this weekend after finishing on the podium at the SKUSA SummerNationals last year.

The KA100 Junior division made its SKUSA Winter Series debut last month in Homestead. The category saw Junior rookie Mateo Rubio-Luengo (Parolin) earn his first wins after graduating up from the Mini ranks. Mateo won both main events, coming from the back of the field on Sunday to earn a second victory on the weekend. His point advantage is just 16 points with Dylan Christie (MDR / Kosmic), who is ready to pounce from second after landing on the podium in both main events. SKUSA SuperNationals 22 podium finisher Bryson Morris (Comet / Kart Republic) sits third in the standings with two top-five results, only 56 points out of the top spot. Top Cadet driver Nikita Johnson (AKT / FA Kart) is set to make his Junior debut in the category this weekend.

The KA100 Senior division at the opening weekend pulled just three total entries with Colton Ramsey (IP / Exprit) winning Saturday and Julia Boos (Kaos / Kosmic) coming in on Sunday. Boos is back for KA100 but Ramsey is not, as he will focus on X30 Senior. Nathan Martin (Nash / FA Kart) is the second KA100 entry for this weekend.

Colin Warren (VLR) had his perfect score at the SKUSA Winter Series in Briggs 206 Senior broken up in January. Warren won the main event on Saturday, but was not the top qualifier or Prefinal winner. In a controversial finish on Sunday, Warren ended up second behind Jake Copeland (Birel ART). Warren still leads the championship chase by 30 points over Copeland. Jorge Ruiz (TB Kart) leads the Briggs 206 Master standings thanks to his win at Round Two. Round One winner and defending champion Eli Yanko (Tony Kart) suffered a disqualification for a broken rear bumper, which put him back to seventh in the standings. Ruiz leads Dan Breitenstein (Birel ART) by 48 points.

The Mini Swift category featured a number of strong drivers in the field during the opening weekend and a majority of them are back for the finale. Everyone is chasing Kai Sorensen (Tony Kart) in the title fight. The Californian swept Round Two and leads Mini rookie Caleb Gafrarar (Birel ART) by 36 points. Saturday winner Miguel Costa (Parolin) is third, needing more podiums this weekend to catch Sorensen and Gafrarar, who had two third-place results in his Mini debut.

Leading the Micro Swift standings heading into the finale weekend is Beckham Jacir (FA Kart). The Round Two winner leads Round One victor Matias Orjuela (Parolin) by just 40 points with Luis Umana (Tony Kart) sitting 100 markers out of first.

EKN’s live streaming audio coverage of the final rounds of the SKUSA Winter Series will kick off on Friday afternoon at approximately 3:20 pm ET. Full coverage from qualifying through the main events on Saturday and Sunday will begin each day at 9:10 am ET. Tune into www.ekartingnews.com/live for to listen to the livestream all day, presented by Courtney Concepts, Mad Old Nut Racing, Croc Promotion and CRG Nordam.