Rosberg Racing Academy: Barnard and Antonelli Close to the Podium 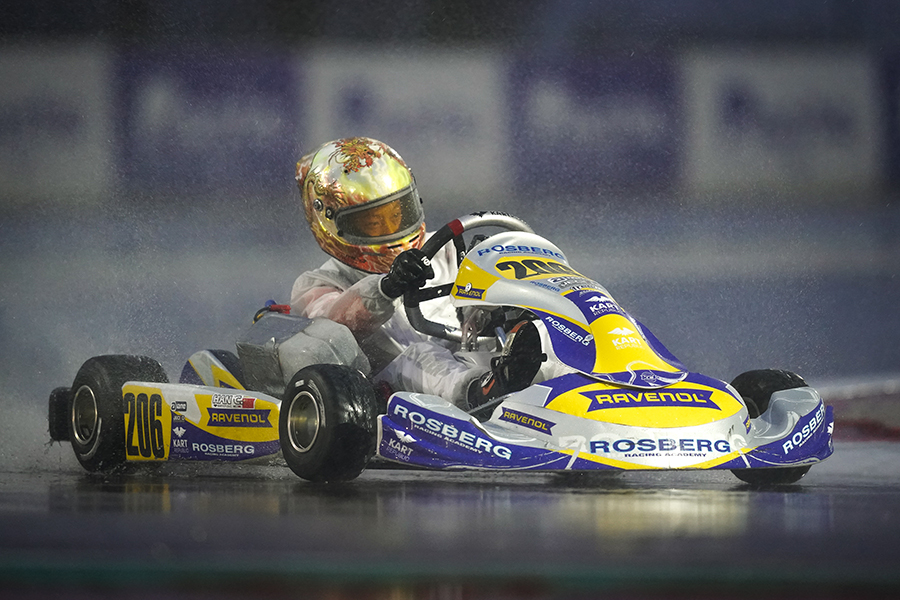 Already well established after the WSK Champions Cup, the Rosberg Racing Academy stayed at the Adria Karting Raceway in early February for the start of the WSK Super Master Series. The preparation of 2019’s young drivers continues for a season full of promise. Following Barnard’s victory a week earlier, the performance was still there for the KR-IAME equipment in the Ravenol colours, with two more top sixes and narrowly missed podiums for Taylor Barnard in OK and Andrea Kimi Antonelli in OK-Junior.

At Adria, Timed Practice and Qualifying Heats took place on a very wet and cold track, forcing drivers to race on wet tyres. “These conditions are never easy, but that’s part of the drivers’ training. A driver must also know how to be fast in the rain,” said team manager Dino Chiesa. “Antonelli did well in OK-Junior with three 2nd places. Han gained experience that will be useful for the future, but Barnard did not have much success at the beginning of the meeting. Very fast in the rain in free practice, he broke his valves in Qualifying, then had a crash and a technical problem in the heats. Fortunately, the result was much better for him…”

For the drivers, supported by Ravenol lubricants, the situation became clearer on Sunday, as did the sky in northeastern Italy. The Junior Antonelli managed his Prefinal perfectly to win with the lap record. In OK, Barnard made a significant comeback to 11th on the starting grid of the OK Final, while the Chinese driver Cenyu Han assured his qualification.

The Academy still at the forefront

The young drivers of the Rosberg Racing Academy continued their efforts in the Final, this time on a perfectly dry track. In OK-Junior, Andrea Kimi Antonelli spent 10 of the 16 race laps in 1st place, but contact with another driver unfortunately caused him to lose several places. “It’s a shame, because I really think that victory was possible in the Final. In the end, this incident dropped me to 6th position,” regretted the Italian hopeful. “For now, I’m 3rd in the standings and I still have three events in this series to improve this position.”

In OK, Cenyu Han was able to apply the advice given by his team to make a nice comeback from 29th to 21st place in the Final. Meanwhile, Taylor Barnard was one of the main protagonists of the pack, coming back brilliantly to 4th after starting in 11th place, with the second fastest time in the race.

Undoubtedly, many positive elements can be taken away from this opening of the WSK Super Master Series for the Rosberg Racing Academy, Ravenol and Kart Republic.