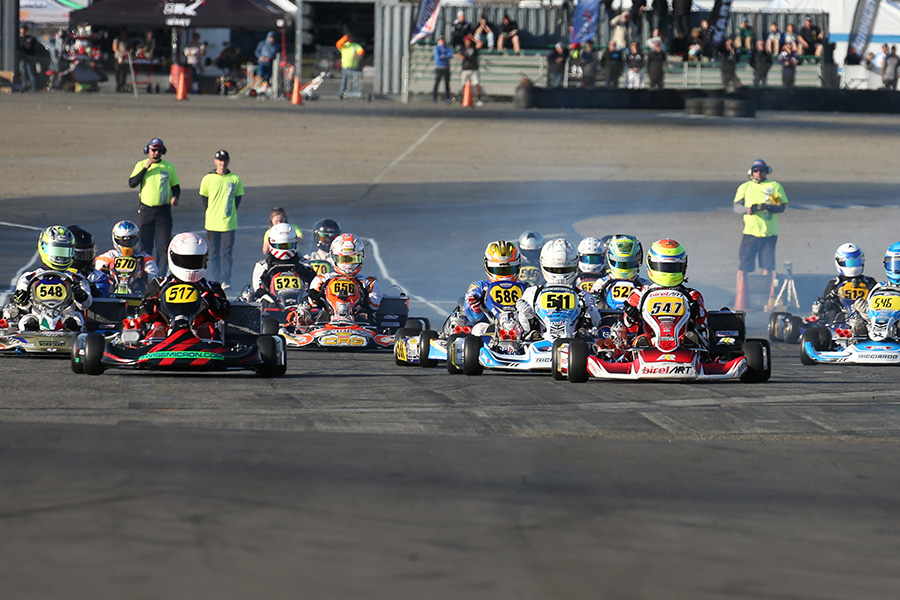 Challenge of the Americas kicks off the 2019 program this weekend at CalSpeed Karting (Photo: ChallengeKarting.com)

The first major event of the 2019 season on the west coast is set for this weekend. The 12th season for Challenge of the Americas begins on the February 8-10 weekend at the CalSpeed Karting circuit in Fontana, California. The event has surpassed the 100-driver mark for the first time since the 2016 season, celebrating an increase it total numbers over the last four events dating back to the 2018 opener. Numbers could reach over 125 total on the weekend for the nine categories set to compete on the weekend and throughout the three-event championship chase. On the line include tickets to the famed Rok Cup International Final and the new ROK the RIO event in Las Vegas established in 2018.

Set outside the Auto Club Speedway tri-oval, CalSpeed is ready to host the opening weekend of the Challenge for the first time. CalSpeed has been part of COTA program, dating back to the 2009 season. This is the seventh trip in the 12 years, and the first to host Round One and Two. Competitors this weekend are navigating the ‘Grande’ course in the counter-clockwise direction. Portions of the layout were revised just weeks ago, making this the first major event on the new layout. Weather will be the question, as rain could hit the are over the weekend, with temperatures in the mid 50s.

eKartingNews.com is back for an eighth straight year with Challenge of the Americas to provide industry-leading coverage from each of the three events for the 2019 season. Those karting enthusiasts not in attendance can listen from home or on the road to the NEW EKN Live 2 broadcast page at www.ekartingnews.com/live2 with Tim ‘Chappy’ Chapman providing the play-by-play call. Daily reports and updates on the EKN Social Media network will fill up your timeline throughout the weekend.

A number of the top drivers from the 2018 Challenge are returning to fight for the top spot once again in the Senior Rok division. Defending champion Jim McKinney (Ruthless / Exprit) is back for another chance at the Rok Cup International Final ticket. McKinney won twice last year at his home track PKRA and finished on the podium both rounds at CalSpeed. Jake Drew (PGR / Ricciardo) had the most wins in 2018, sweeping the weekend at CalSpeed before adding a third at Sonoma to finish runner-up in the championship chase. Bijoy Garg (SSM / Exprit) is the third different winner from the 2018 season back for the new year. Garg won the wild rain race in Sonoma in his first Senior start. Other championship contenders returning include Jenson Altzman (Ruthless / Exprit) and Filip Niemkiewicz (PKS / Kart Republic). A returning driver to the series is Jordan Redlin, as he is set to join the new EsTeam Racing squad aboard a VemmeKart. Cooper Becklin (GKH / Birel ART) is leading the rookie contingent after finishing fifth in the Junior championship last year.

One of the largest categories in 2018 and moving into 2019 is the Junior Rok division. At nearly 20 drivers, the class is sure to provide some exciting action throughout the three events. 2018 champion Ugo Ugochukwu is not scheduled to defend his title, thus opening the door for the many competitors hitting CalSpeed this weekend. Ethan Ho (APM / OTK) is the only returning contender from the 2018 season, placing fourth in the championship chase. Jonathon Portz (OTK) has been successful at the CalSpeed circuit in the past, as the Oregon driver is coming off podium results at the WKA Daytona KartWeek. As the weekend begins in CalSpeed, we will learn more about who will battle for the Rok Cup International Final ticket.

The category fighting for the largest of the COTA opener is Masters Rok. The Masters division has always been one of the premier divisions of the Challenge, and 2019 will be no different. Three of the last four champions are in the field at CalSpeed, including 2018 title winner Erik Jackson. The Californian used six podium finishes, including two victories at the finale to secure the championship and the Rok Cup International Final ticket. He is back aboard the VemmeKart that earned him the title in 2018. Billy Cleavelin (RPG / Kosmic) won the championship in 2017, making a return to the series after being away in 2018. Paul Bonilla (FTK / Tony Kart) is a two-time champion, trying to become the only three-time title winner in the history of the Challenge. David Pergande (JHM / Kosmic) is among those who challenged last year for the title, along with Mike Giles (FTK / Birel ART) and Ed Quinn (FTK / Birel ART). Former series regulars Chad Wallace (Birel ART) and John Breidinger (VRP / GFC) are returning along with multi-time national champion Derek Wang (FTK / FA Kart) making his first start in the Masters division.

One category that has increased from last year to this entering the opener is the Shifter Rok Senior class. In 2018, a total of 17 drivers made at least one start in the six rounds. The entry list for CalSpeed has matched that, with more anticipated to enter trackside. 2018 champion Alex Keyes is not electing to defend his crown, leaving open the spot. Zach Pettinicchi (VRP / Formula K) was among those contending last year and will be one of the many vying for the title in 2019. Add in veterans Ron White (RWR / CRG) and Brian Keck (CRG) along with EKN Driver Rankings #4 Hunter Pickett and #30 Jason Pettit, both moving to the new GFC chassis for 2019.

The Shifter Rok Masters class is the same, already at 10 entries for CalSpeed to match its total number of racers for 2018. Defending champion Kalvin Chen is moving from CRG to CompKart for the 2019 season. Nick Firestone (DR Kart) won the opening two rounds of 2018, placing second in the title fight. CRG Nordam and Ron White Racing is making an impact, bringing Texan Rod Clinard to battle in CalSpeed along with many others aboard the famed black and orange. Fellow Texan Nathan Stewart (Sodi Kart) is one to watch as well, along with Jason Campbell (DR Kart) and Canadian Chris Eagles on the Atomica chassis with The Race Lab. The race for the Rok Cup International Final ticket is going to be exciting.

The pattern continues as the Mini Rok division entry list for CalSpeed matches the total number of drivers for the 2018 season. Last year, Chase Gardner drove his way to the championship. Not returning to defend his crown, the spot is open for the 16 drivers entered. Despite winning twice last year, Logan Toke came up short in the championship chase. Toke (PKS / Top Kart) enters as one of the top contenders, along with Phoenix driver Parker DeLong (Benik). The ROK the RIO Micro winner stood on the podium in both COTA main events in the Mini category last year. Enzo Deligny (2Wild / Tony Kart) is one of the new drivers to the COTA program to watch, along with Anthony White (RWR / CRG) who won the ROK Sonoma championship in Micro Rok last year.

Growth includes the Micro Rok division, the youngest drivers of the series. Last year, Gage Jarvis (Benik) was the lone driver through the first two rounds before Nico Sarphati (Tony Kart) joined him in Sonoma. The two are back for the 2019 opener along with Zachary Walrod (Benik), Canadians Talan Braico (Atomica) and Sydney Cassels (VemmeKart).