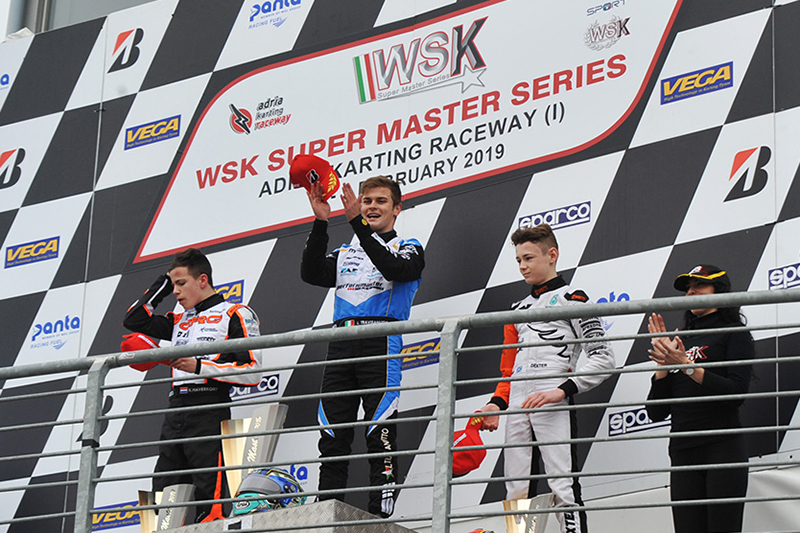 The tarmac switched several times from wet to dry and the opener run today in Adria (Rovigo, Italy) has therefore challenged heavily the skills of the first classification leaders. No matter how difficult were qualifying yesterday, Finals today have raised the bar in terms of spectacle on track, as usual in karting competitions. Motorsport fans had the chance to enjoy the fun following all the races of the day through the live streaming available at wsk.it.

The OK Final (above) started with the fight involving the Dutch Kas Haverkort (CRG-TM-Bridgestone) and the Scot Dexter Patterson (KR-Iame). The first got the lead from the pole position and fended off the rival early on, but eventually had to concede his position despite managing to stay close to the Scot. The Italian Lorenzo Travisanuto (KR-Iame) started from the fourth row of the grid and slid in the fight among the leading duo, taking on the lead from Patterson. The Dutch had the upper hand on the Scot in the fight for the runner-up position and closed his effort behind the leader Travisanutto. The British driver Harry Thompson (FA Kart-Vortex) recovered from P12 managing also to reach P2, but unfortunately, a penalty for the dropped front fairing relegated him to P5. The provisional classification of OK sees Travisanutto on top (64 p.), followed by Haverkort at 60 and Patterson at 50.

Camara holds on to the lead and wins OK Junior.

The OK Junior Final has been unpredictable until the very end. Half of it was firmly in the hands of the Italian Andrea Antonelli (KR-Iame-Vega), but he was challenged by the Swede William Silverholm (Tony Kart-Vortex) in the closing stages. The two switched positions on top until the Brazilian Rafael Camara (Birel Art-TM) found his way past both. In the following tight fight, Silverholm was put off by a move by the Spanish Pepe Martì (Tony Kart-Vortex), who ended the race on top but was later on handed a penalty. The victory went to Camara, who was joined on the podium by Robert De Haan (Energy-TM) and Thomas Ten Brinke (FA Kart-Vortex). Camara is also leading the classification at 89 points and is followed by De Haan (55) and Antonelli (44). Final B, the race reserved to drivers not qualified for the Final, was won by the Dutch Laurens Van Hoepen (FA-Vortex) in the morning.

The domination of the Belgian Ian Eyckmans did not last long in the 60 Mini Final, as he was overtaken by the Arab Emirates’ driver Rashid Al Dhaheri (both on Parolin-TM-Vega). The latter started from the fourth row of the grid, but installed himself on top and kept the lead until the chequered flag. The Russian Dmitry Matveev (Energy-TM) displayed a good shape and would have obtained a podium finish, had it not been for the dropped front fairing that cost him a penalty. Behind Al Dhaheri, Eyckmans held on to P2 leading the Russian Maksimilian Popov (Parolin-TM) in P3. Al Dhaheri (65 p.) is on top of the classification, followed by Eyckmans (53) and Kutskov (Energy-TM, 48). Final B was won by the Italian Andrea Filaferro (Tony Kart-TM-Vega).