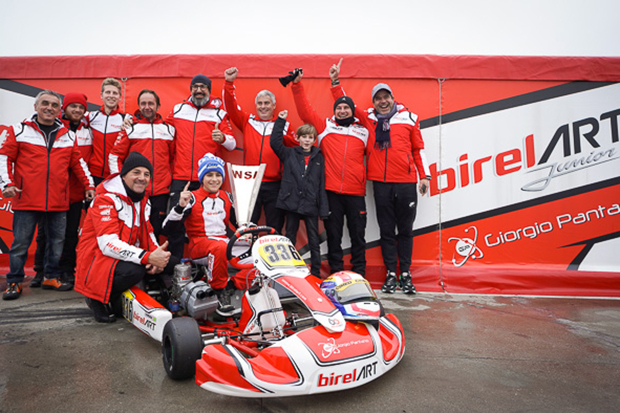 The resumption of racing was not easy for the drivers from the Birel ART Racing Team during the first meeting of the WSK Super Master Series at the Adria Karting Raceway. As demonstrated by the great victory from Rafael Camara in OK-Junior, the team worked well during the winter and the equipment is already very competitive. This very positive result has been confirmed by the final comeback of Luigi Coluccio finishing in the top 10 of the OK category.

A reduced team took the road to Adria this weekend in early February. Indeed, the KZ / KZ2 were not invited to this event and not all the drivers were ready to compete at this time of the year. The weather was not favourable during the three days of the event with the frequent rain and limited grip up to the Prefinals, all in very cool temperatures. Slips and penalties made it difficult for the less experienced drivers to join in with the 2019 competition.

However, despite not always favourable circumstances, the quality of the Birel ART chassis and TM Racing engines, entrusted to its various preparers, recorded interesting performances. No doubt, for its 60th anniversary, the brand from Lissone has the strength to achieve the ambitious goals it has set.

Newly joined the Birel ART Junior Team, under the responsibility of Giorgio Pantano, the Brazilian Rafael Camara was able to make the most of the potential of his new OK-Junior equipment to the great satisfaction of his team. Indeed, his high level of performance from the first meeting of the season has allowed technicians to collect a lot of very useful data to continue their development work. After a relatively average Qualifying, Camara was able to raise the bar in the Qualifying Heats, brilliantly achieving top three finishes each time with a fastest lap in the race. Back in 2nd position on Saturday night, he improved his score again on Sunday by winning Prefinal B and the Final against very determined opposition.

Lorenzo Ressico D’Aloisio also started on a good pace, but several spoiler penalties hindered his progress. This did not prevent him from finishing a beautiful Prefinal A in 3rd position. Well placed in the top five early in the Final, Lorenzo was then caught in a whirlwind of aggression in which he let slip a few places until he finished 15th. Cristian Bertucca made his debut in OK-Junior in a demanding situation. It was not easy for him to integrate all the new parameters of the category in the middle of agitated packs, but he nevertheless came close to qualification for the Final which he would have been achieved had he not been given a penalty.

Coluccio moves up in the top 10

The only representative of the team in OK, Luigi Coluccio secured the first part of the event with consistency in the rain before being unleashed during the Final when the track was practically dry again. He quickly climbed into the top 10 of the competition, maintaining 9th position, a gain of 11 places, until the penultimate lap of the race. A contact in the middle of the battle then caused him to lose three places at once.

Progress in 60 Mini despite the rain

The kick-off of the season immediately put the 60 Mini Junior Team drivers in the heat of the moment. Relatively far back in the Qualifying rankings, they had to face the tough battles of the pack on a slippery track. This robust experience was useful to them as we saw them begin to climb the order during the Prefinals.

“It was not an easy weekend,” said Ronni Sala, President of Birel ART. “But this event was very instructive and we had the satisfaction of concluding with a victory in OK-Junior. I would like to congratulate Rafael Camara for his brilliant race management. This kind of success builds the confidence of the whole team for future competitions and gives us good indications for better preparation.”