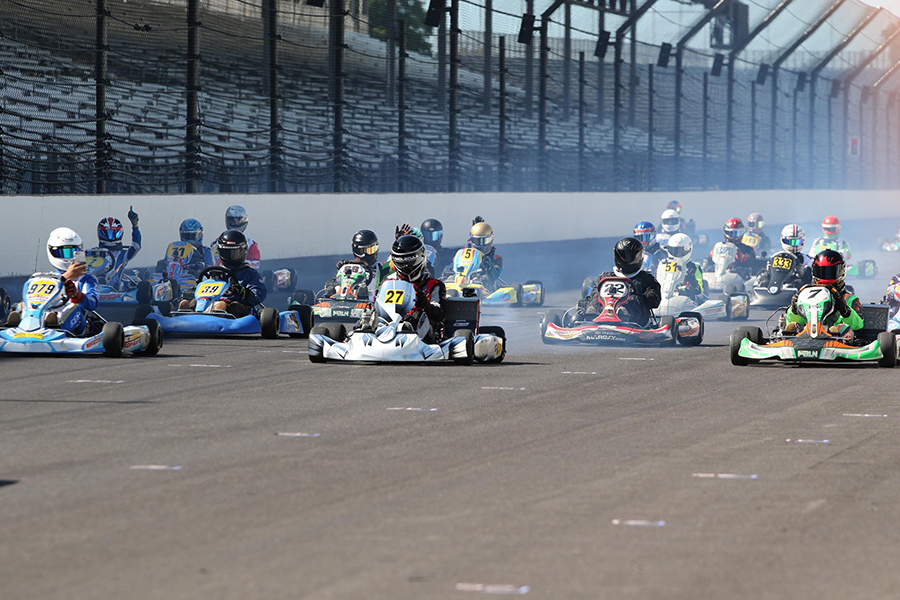 In building upon the success of the 2018 Battle at the Brickyard, USAC sees more growth for one of the largest events of karting in the Midwest. Eighteen classes are now set to compete at the Indianapolis Motor Speedway on July 4-7, 2019.

The Battle at the Brickyard has become an event for all of karting that welcomes both the casual club karter, the more serious drivers that travel the country, as well as the road racing enthusiasts. The first two installments of USAC’s karting Battle of the Brickyard have been an overwhelming success. The unique event has become a staple of karting in the Midwest and globally as entrants have traveled from around the world to race at the famed Yard of Bricks. Last year’s installment presented every entrant with a free drive around the famed Indianapolis Motor Speedway.

Along with the lap across the bricks on Friday, the fast qualifiers and front row were invited to take part in a traditional Speedway photo as well as a cookout. The Battle at the Brickyard has also become an event for all of karting that welcomes both the casual club karter, the more serious drivers that travel the country, as well as the road racing enthusiasts. Saturday evening, complete with band, and the traditional pre-race opening ceremonies on Sunday that make everything leading up to any event at the Indianapolis Motor Speedway special. After the checkered flags had flown, the winners were given the ceremonial bottle of milk as long as the photo with the winner’s wreath.

The 2019 edition will build upon the diverse karting friendly class structure as the third annual Battle at the Brickyard will welcome two new classes to the 12-15 year old junior categories at the Indianapolis Motor Speedway. The first will be the Margay Ignite Junior class. The Ignite program has become the premiere entry-level stepping stone into karting in the United States. The Ignite Juniors will also be one of many classes transitioning onto the Hoosier tire for the first time.

Along with the Margay Ignite Junior class, USAC will welcome the debut of the IAME KA100 Junior class for the first ever appearance of the engine in the event. The last year has seen significant growth in the class across the United States. Along with the juniors, the seniors are also set to make their debut in the KA100 class as well in 2019. The new KA100 classes will be racing on MG tires alongside the X30 and now X30 Masters class, thanks in part to KartSport North America. 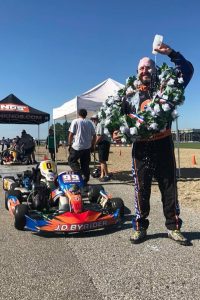 Drinking the ceremonial milk and photo with the winner’s wreath will return in 2019 (Photo: USAC Karting)

Battle at the Brickyard will also see the usual host of classes that have been a staple of the event. As previously mentioned with the onset of Hoosier Kartsport and USAC’s long running partnership Hoosier Tires many classes will see changes to the tires that they are competing on in 2019. The wildly popular Margay Ignite Senior and Masters will return on Hoosiers. Along with the Ignite classes, by popular demand the 125cc Honda, KZ, and Shifter Classes will all be running on the tire produced in Indiana.

With the addition of the KA100 class USAC also recognizes the large following of Yamaha drivers in the country and are fully committed to the Yamaha 100cc classes. This year will see no changes to the class structure as Yamaha Senior Medium, Heavy, and Masters will all return on Hoosier Tires. Yamaha Junior will also return with no changes as the Yamaha Juniors will continue to race on Bridgestone rubber.

The ever popular Briggs and Stratton 206 class will make its return with the 206 Junior, Medium, Heavy, and Masters all doing battle on the 1 mile circuit inside of the Indianapolis Motor Speedway. The CIK 206 class has produced some of the closest finishes in the history of the Battle at the Brickyard.

Registration will open on Friday February 1st for the 3rd annual Battle at the Brickyard at www.USACkarting.com. Registration for the third annual Elkhart Riverwalk Grand Prix will open on March 1st as we work to finalize the class structure on the third installment of the historic street race. We look forward to seeing everyone return as well as welcoming new karters from all walks of the sport in 2019.

Watch for more details on this event as well as the SimCraft 24 Hours of Orlando and the Elkhart Riverwalk Grand Prix. For more information and news make sure to follow www.USACkarting.com and be sure to keep up with us on social media.