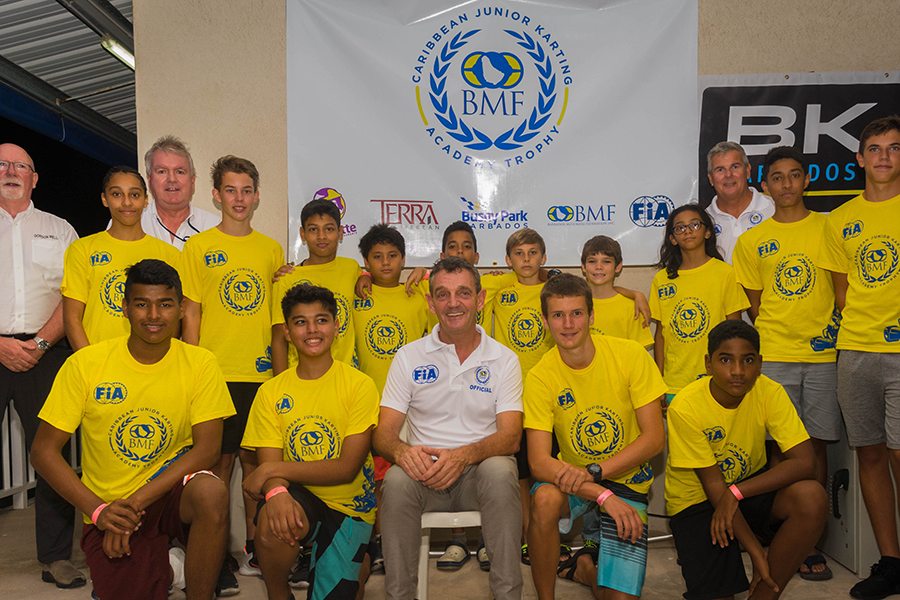 Ahead of rounds three and four of the Caribbean Junior Karting Academy Trophy (CJKAT) at Bushy Park Barbados this weekend (February 2/3), the 14 young regional contenders have earned high praise from Dubai Grand Prix Clerk of the Course Ronan Morgan. After heading the team of FIA-accredited Regional Training Providers (RTP) who tutored the youngsters last month, he said: “they promise a great future for Caribbean motor sport.”

Morgan, his Dubai GP Deputy Clark, kart racing expert Gordon Mellis, and former F1 driver Tommy Byrne conducted two days of classroom and on-track training, organised by the Barbados Motoring Federation (BMF) at the facility. Morgan said: “As an FIA RTP trainer, I’ve completed training in 26 different counties around the world. This was the most fulfilling event I’ve been involved with. We had an incredible audience of 14 really talented young karters from 10 to 15 years old, who were way beyond our expectations in their level of experience for such young people.

“What made it for us was that, after two days of intensive training over many modules followed by two days of great wheel-to-wheel racing, we witnessed first-hand an incredible improvement as drivers and in general all-round learning. The lasting image I have was most of the young stars coming to us individually with no prompting, thanking us for what we taught them – great people, who promise a great future for Caribbean motor sport.”

Barbadian racers Calem Maloney and Adam Mallalieu are the early front-runners in the CJKAT, having won seven of the first weekend’s eight races. Jamaican 13-year-old Tommi Gore won the other race, while his compatriots Ryan Chisholm, also 13, and Zander Williams, 12, were podium finishers. Maloney has 158 points, leading Mallalieu by 14, with Chisholm (103), Gore (92) and Williams (80) completing the top five.

Looking back on his first experience racing the Vortex-engined Exprit OK-Junior kart, 12-year-old Maloney said: “I really enjoyed driving the OK-J. It handles better than the Easykart, although being small makes it challenging to manipulate the kart. One of my biggest challenges was trying to manage tyre wear and still go fast, especially in the longer finals. I am looking forward to rounds three and four and can hopefully maintain the lead.”

His closest challenger was 14-year-old Mallalieu, who had some previous experience of the OK-Junior karts, having been the first Caribbean driver to contest the CIK-FIA Karting Academy Trophy in Europe last year. He said: “Racing against the best from around the Caribbean is a lot of fun and a real challenge. I am one of the oldest, also bigger than the others, so I am over the minimum weight by 20 pounds. That takes away the home field advantage that I would have had, and makes it even more of a challenge. I am looking forward to the tight competition this weekend where I hope I can come out on top.”

Training sessions were also held last month with local senior officials and marshals, around 20 of each, about which Morgan added: “Normally when one trains officials in a well-established environment you often get ‘push back’ when you’re told ‘that’s not the way we do things here’. There was no such attitude from the great bunch of officials we met. All were focused on trying to improve and to follow any advice we could give. Finally, I must mention the huge welcome, hospitality, warmth and friendliness extended to the three of us from everyone involved in Barbados. A big thanks to Andrew Mallalieu and BMF for grasping the initiative and driving this along.”

BMF President Mallalieu concluded: “I was extremely satisfied with the first weekend of CJAKT racing. The level of skill shown by the juniors was fantastic and above all of our expectations. Each of the eight races for the weekend was settled on the last lap; in fact the winner in two of the races was determined in the last corner.”

The Barbados Karting Association (BKA) season has been restructured, to ensure fairness in the Champion Driver title chase for those competing in the CJKAT. To give the 60cc Cadets additional exposure and provide for the 125cc Masters to participate in the two remaining weekends, the BMF has added races within the Academy programme. These dates will now become the BMF Winter Cup, with three races per category each weekend. The 2019 BKA Championship will now start on April 14, featuring four races for all the usual classes on each of the six dates, meaning that the total number of races will be same as last year.

Sponsored by Bushy Park Circuit Inc (BPCI), Chefette, Sol and Terra Caribbean, CJKAT is modelled on the CIK-FIA Karting Academy Trophy, which has been the first rung on the ladder of the Federation Internationale de l’Automobile’s (FIA) single-seater path to F1 since 2010; it is supported by the FIA’s Sport Grant Programme. The Grand Prize for the Champion is a fully-paid entry and X30 Junior kart for one Sunshine State Karting Challenge (SSKC weekend) in Florida, valued at more than US$3,000.