Myers, Brooks and Mars among winners in Miami 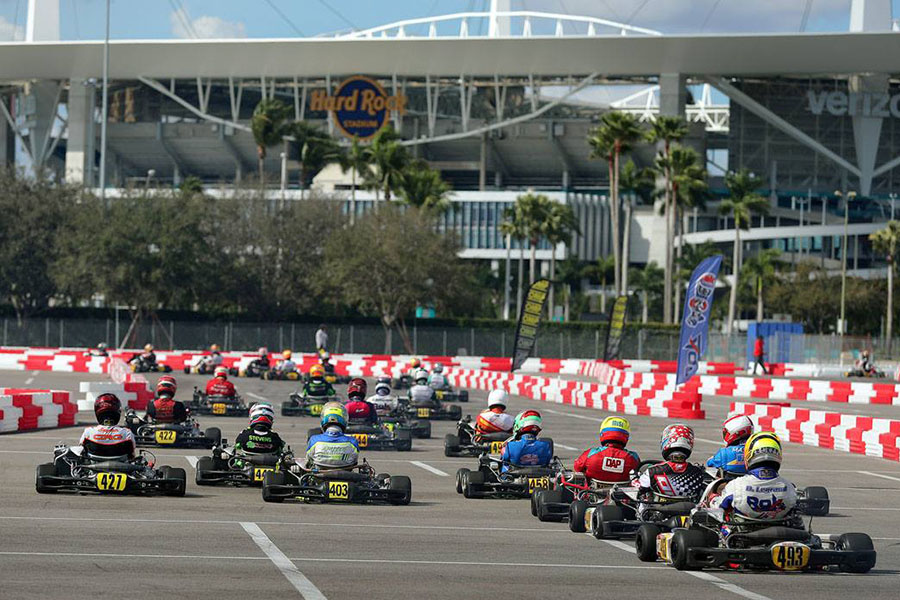 The Florida Winter Tour kicked off the 2019 series at a new location, the home of the NFL’s Miami Dolphins, Hard Rock Stadium. Located in the heart of Miami, the facility has become the home of the FWT for the opening two rounds of the 2019 season. The first event, held on January 17-20, was conducted on a temporary circuit that mirrored the layout of the famed South Garda Karting facility. The Lonato, Italy course is the home of the ROK Cup International Final each year, with champions from the Florida Winter Tour set to earn tickets to compete in the October event.

Weather played a role on the weekend as storms delayed action on Sunday, forcing the cancellation of the Prefinals. Thus, the results from the three heat races over Friday and Saturday set the grids directly for the Finals, which were held once the weather moved away from the Miami area Sunday afternoon. A total of 219 entries took part in the 10 divisions, which began the championship chase that ends in March at Ocala Gran Prix.

Two of the top shifterkart drivers in the Americas battled each other on the weekend in Shifter ROK. EKN Driver Rankings #1 AJ Myers (MONR / Croc Promotions) and former #1 Danny Formal (LEM / Formula K) held the top two spots through the opening two days. Formal had the edge with fast time in qualifying and two heat wins while Myers grabbed the win in Heat #2. The two started on the front row, however, were jumped by Andrew Bujdoso (MONR / Croc Promotions) at the start. Bujdoso led the first nine laps until Myers took over, going on to win by six tenths of a second. Formal ended up third on the podium with Robert Bujdoso (CM / GP), the elder brother of Andrew, and Colombian Henry Cubides (ER / Tony Kart) completing the top-five. 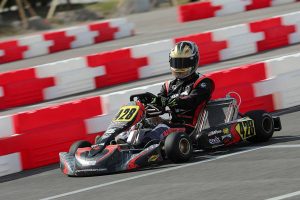 A dominant performance for California driver Christian Brooks as he swept the weekend in the Senior ROK category. Brooks set fast time in qualifying before leading every single lap of competition. Winning all three heat races, Brooks drove away to a five-second advantage in the Final for the victory. Brazilian Arthur Leist (PSL / Birel ART) was runner-up with Canadian Nicholas Hornbosel (REM / Kosmic) making it three different countries on the podium. Senior rookies Sebastian Montoya (Tony Kart) and Arias Deukmedjian (LEM / Praga) were fourth and fifth.

It was a two-driver fight in the Junior ROK division with USA driver Luca Mars (SCR / Tony Kart) and Brazilian Enrico de Lucca (NF / Kosmic) throughout the weekend. Mars struck first, setting fast time in qualifying while de Lucca won the opening heat races. Mars took the third moto, however, when the points were calculated it was de Lucca on the pole position. They were joined by Colombian Diego Contecha (Orsolon / Tony Kart) at the front in the Final. He led the early laps until Mars took over the spot on lap five. The race went down to the wire with a group of karts catching Mars late in the race, including Contecha, Brent Crews (Kart Republic), and Lucas Staico (Orsolon / Tony Kart). A bit of contact took place in the final circuit, with Crews jumping from fourth to first to take the provisional win. Crews was handed a five-second penalty for a pushback bumper, handing the victory to Mars. Staico was third on-track, but was given a three position penalty for a driver infraction. Contecha disqualified for tampering with the pushback bumper in the scale line. All of that promoted Canadians Mac Clark (Prime / Birel ART) and Justin Arseneau (SCR / Tony Kart) to the podium with Chloe Chambers (MDR / Kosmic) fourth and Staico into fifth. 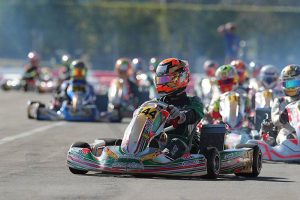 Decorated Master ROK driver Renato Jader-David (Orsolon / Tony Kart) dominated the weekend at Hard Rock. Renato grabbed the #1 position in all on-track sessions, highlighted by a 2.5-second margin of victory in the Final. Brazil swept the podium, including the top-four spots with Felipe Rechid-Lapenna (CRG) and Leonardo Marcelli (CRG) on the podium with Ricardo Nunes (DR Kart) in fourth. Cristian Saa (Exprit) made up the top-five.

New to the Florida Winter Tour was the addition of the 100cc Senior and 100cc Junior categories. Zero entries in the Senior class were left eight in the Junior class to battle on the track alone. Chloe Chambers (MDR / Kosmic) score the inaugural win over William Cox (Tony Kart) and Adam Maxwell (Top Kart). Santiago Biagi (Exprit) was fourth with Marcos Telle (JCM / Tony Kart) in fifth.

Returning to be part of the Florida Winter Tour was the Briggs & Stratton 206 division. Senior returned with a Junior division making its series debut. Canadian Jordan Prior (Prime / Birel ART) edged out Zachary Linsell (MGM) for the victory with Mickael Aubin (PSL / Birel ART) joining them on the podium. Former Canadian Nationals winner Darryl Timmers (PRO / Intrepid) was fourth with pole sitter Zack Skolnick (VSR / Tony Kart) dropping to fifth. Canada swept the top-four spots in Junior with Gianluca Savaglio (360 / Intrepid) beating Nicky Palladino (360 / Intrepid) to the line by 96 thousandths of a second for the victory. Carsyn Massey (360 / Intrepid) and Callum Baxter (PSL / Ricciardo) made up the top-four with Alejandro Ramirez (SLA / Tony Kart) in fifth. 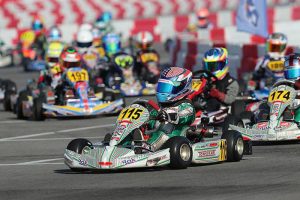 Kai Sorensen (Supertune / Tony Kart) has solidified himself as a top Cadet driver for the 2019 season. Sorensen swept the action in the Mini ROK category, leading every lap of the weekend. Sunday’s Final was a 6.7-second advantage after 15 laps, leaving the fight on track for second. That battle went to Texan Jack Jeffers (Orsolon / Benik), as he bested Nikita Johnson (AKT / Energy), Miguel Costa (Parolin) and Mini rookie Caleb Gafrarar (PSL / Birel ART), up ten spots from 15th.

The second event of the Florida Winter Tour presented by ROK Cup Promotions is scheduled for February 14-17, returning to the Hard Rock Stadium in Miami on what will be a different layout.