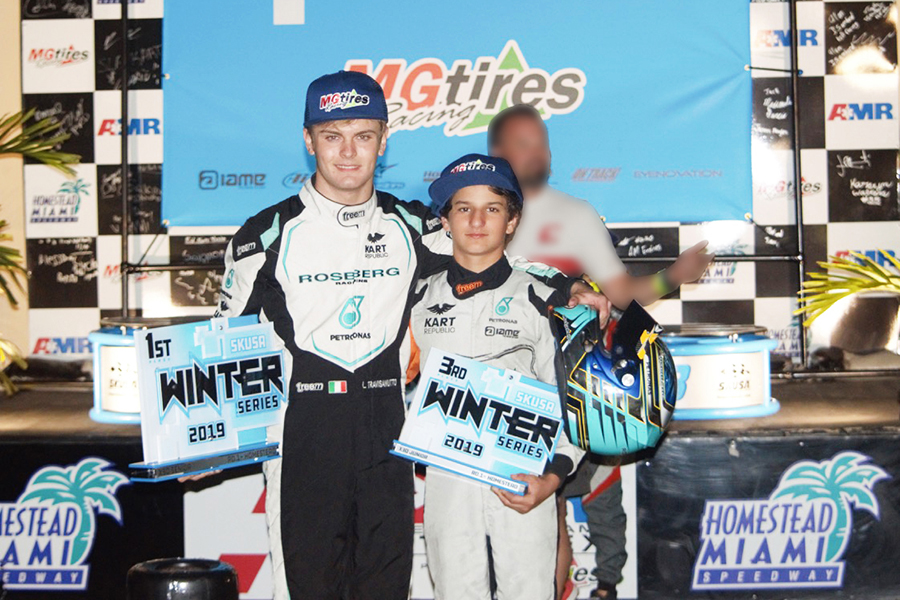 In his first event of the 2019 racing season, Florida resident Santiago Trisini did not disappoint. Taking place at the AMR Motorplex in Homestead, Florida and competing in the talent filled X30 Junior class at the Superkarts! USA (SKUSA) Winter Series, Trisini joined fellow Kart Republic driver and former world champion, Lorenzo Travisanutto, on the podium on Saturday as the duo secured four top-seven finishes over the weekend.

Progressing through two complete days of testing and fine tuning his IAME powered Kart Republic chassis, Trisini showed pace to be at the pointy end of the field once wheel-to-wheel competition commenced on Saturday. Qualifying in the fourth position and finishing fourth in his prefinal, Trisini began his quest for a podium from outside row four in the eighth position.

As one of the fastest karts on the track, Trisini circuited the AMR Motorplex facility with the second fastest lap time in the main event and advanced forward five positions. Driving like a seasoned veteran, Trisini was committed to scoring a podium finish and did just that, crossing the stripe in the third position, and adding another podium finish for himself and the Kart Republic brand.

Back to the track on Sunday and looking to improve on his performance, Trisini had a less than satisfying qualifying run as he was mired back in the 18th position. Not happy with his performance, the young driver was forced to be aggressive in both the heat race and main event to salvage a good result.

Cautious in his approach as a DNF would force him to start near the tail of the field, Trisini drove to a seventh place finish in his prefinal which resulted in a 13th place starting spot for the main event. Confident in himself, his abilities and his equipment, the Kart Republic pilot once again drove into the top-ten and managed to secure a seventh place finish, his second top-ten result of the weekend.

“It was a good weekend in Homestead and great to be part of the Kart Republic family,” explained Santiago. “We had an engine issue on Sunday morning that we think was due to the weather changing but overcame it in the end. I would like to thank Kart Republic and IAME for the help, hard work and support as well and congratulate Lorenzo on another race win.”

This was the first event of a very busy season for Trisini as he will compete internationally all around the world. With his next event taking place in one month’s time, the Kart Republic driver will return to Homestead for rounds three and four before jet setting around the world. Set to contend in 18 European events as well as the Superkarts! USA Pro Tour, Trisini will do battle in the European Championship, OKJ World Cup and other select series. Working directly with Dino Chiesa and the Kart Republic factory team, Trisini will be a driver to watch in 2019.

As the 2019 season gets underway, Santiago understands the demands that are placed on him as he enters a very busy year. Looking forward to traveling and racing, Santiago will also keep with his school program as he looks to grow as a person and a driver both on and off the track.

For more information on Santiago Trisini, please contact RTD Media and Management at Info@RaceTechDevelopment.com or 317.270.8723.