Days Away from 2019 Challenge of the America Opener at CalSpeed

In three weeks time, the Challenge of the Americas will be welcoming competitors from around North America as the 12th season begins for the premier winter series on the left coast. The 2019 season for the Challenge starts on February 8-10 at the CalSpeed Karting Center in Fontana, California. The nine categories competing, based on the ROK Cup USA platform – will be kick starting the championship chase that, for those drivers able to win or stand on the coveted COTA podium, will be on their way toward reaching the title and tickets to the ROK Cup International Final in Lonato, Italy.

The six-round championship chase for Challenge of the Americas ends with a grand prize. Champions in the Mini ROK, Junior ROK, Senior ROK, Masters ROK, Shifter ROK Senior, and Shifter ROK Masters earn a ticket to compete in Italy at the ROK Cup International Final at the famed South Garda Karting circuit.

“Last year was the first trip to the ROK Cup International Final with drivers from Challenge of the Americas. The four drivers performed well throughout the week in Italy and it was great to be part of the ROK Cup USA team,” stated series promoter Andy Seesemann. “I’m excited to take more drivers there in 2019 and represent Team USA at one of the biggest international events in the world.” 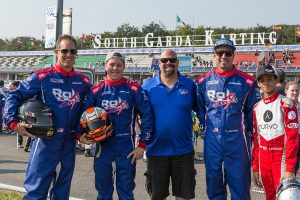 Those drivers in the Senior 100cc, Masters 100cc and Micro ROK divisions are not left out, as those drivers to claim the series championships earn entries to the ROK the RIO event in Las Vegas on October 28-November 2 at the Rio All-Suites Hotel & Casino.

Seesemann added, “Last year’s inaugural ROK the RIO event was exciting and uplifting. Many drivers from around North America and the world took part in the event. The 2019 edition should be even more competitive with deeper fields and of course an entertaining Halloween week in Las Vegas.”

Registration for the CalSpeed Karting event is open until January 25 at Challenge of the Americas registration page. The event hotel is the Azure Hotel Ontario, located on the northwest side of the Ontario International Airport and minutes from the Auto Club Speedway. The ‘Challenge of the Americas’ rate of $89.26/night – including breakfast – expires on January 22. More about the details of the February 8-10 weekend is available at the COTA Event Page.

“After our inaugural year with ROK in 2018, I am very excited for the future of ROK on the west coast.  Numbers don’t lie.  While other programs are shrinking in the West, the ROK program is growing every day.  There is a great demand for the VLR air cooled engine, attractively priced at more than $800 less than our competition and we cannot keep ROK Shifter engines on the shelves.  The ROK Shifter is appropriately named, as it is as solid as a rock, with no further testing required to keep it running on track.  Customers recognized the great value in driving such a well-developed shifter package that offers them an amazing driving experience.  While others may have more horsepower, this is kart racing, not drag racing.  Actually finishing a 25-lap main event is more important than ET down the straight.”

All the different powerplants available through the Vortex ROK Cup program will be on display first in southern California. 2019 marks the first year for the CalSpeed facility to act as host to the opening rounds for Challenge of the Americas. In fact, this will be only the second time the first event is in the state of California, dating back to the inaugural event in 2008 in Willow Springs. The previous 10 openers have been in the state of Arizona, either in Phoenix or in Tucson. The CalSpeed Karting Center is rolling out the red carpet for the Challenge, as the first major event of the 2019 season to hit the new ‘Grande’ layout featuring updated corners.

Questions have been asked regarding the addition of a Junior 100cc category for Challenge of the Americas in 2019 and concerning the disparity of the ROK VLR100 and the IAME KA100. Series promoter Andy Seesemann issued a statement reviewing the situation. A minimum of 10 drivers MUST send in a proper entry form with a credit card number to reserve their spot.

“We have done some preliminary testing with the new VLR Junior header and have found the packages very close.  My position on the class is similar as before, but with a twist.  I still need 10 drivers to send me an entry form in order to add the class, but I will allow BOTH engines after our testing.  Further testing will show if we need to do any technical adjustments to the engines.”

The series would also like to remind competitors that pushback bumpers are NOT mandatory in 2019. Although the Florida Winter Tour and ROK Cup Promotions have changed their fuel supplier, Challenge of the Americas will remain with VP Fuels. Racers at the Challenge are very familiar with the VP C-12 and Motul oil, and that combination will be utilized at the Challenge and also for the California Rok Championship.

Complete information for the 2019 Challenge of the Americas will be published at the challengekarting.com. More information, videos and photos can also be found on the Facebook page.