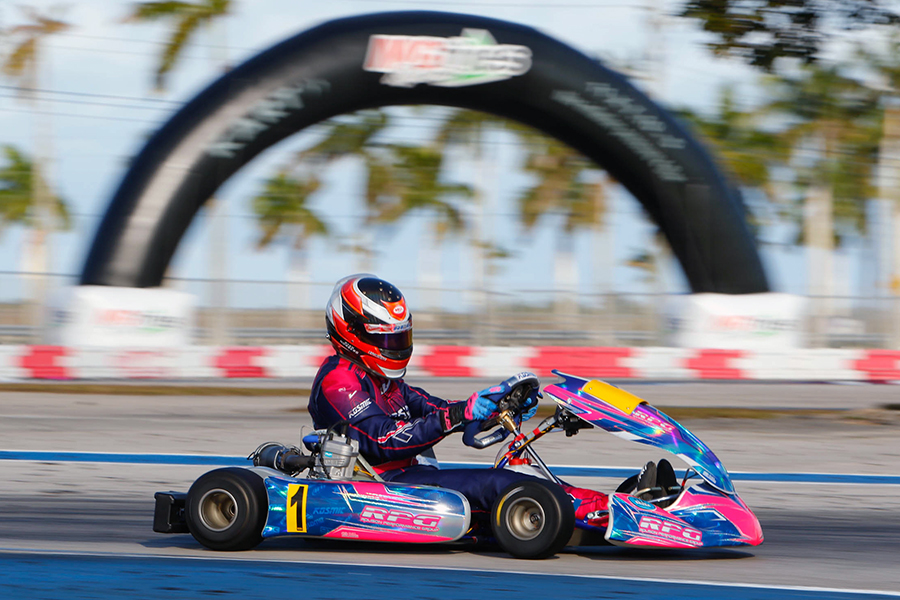 With the excellent weekend weather continuing in South Florida, Superkarts! USA capped the opening event of their Winter Series program on Sunday with tremendous racing coming from all of the 11 race categories that were on the docket. The layout at the AMR Homestead-Miami Motorplex Presented by MG Tires offers many overtaking opportunities and the competitors leveraged all of them throughout the day to keep things exciting.  Rolison Performance Group’s new recruit Ryan Norberg put his skills on display, coming back from a disappointing last lap loss on Saturday to flat out dominate the X30 Senior action on Sunday. Likewise, Croc Promotion USA’s AJ Myers remained unbeatable in the Pro Shifter class, winning again over Billy Musgrave. With over 230 entries filling the paddock, the SKUSA Winter Series did not disappoint in terms of competition and thrilling on-track action.

In the PSL Karting sponsored X30 Senior class, Norberg (Kosmic) dropped the hammer at the start of the weekend’s first session on Saturday and never lifted, qualifying on pole to set up his Prefinal win. The American led 24 of the 25 laps in the main, only to get nipped by 2018 World Karting Champion Lorenzo Travisanutto (Kart Republic) on the final lap. Highly motivated to take care of unfinished business, Norberg dominated the Sunday action in sweeping all three sessions, completing the attack with a 0.933-second win over his teammate Patrick Woods-Toth (Kosmic).  Competing in his first national event as a Senior, the 15-year-old Canadian qualified sixth and then won his Prefinal over last year’s SKUSA Pro Tour X30 Junior champion Arias Duekmedjian (Praga) to secure an outside front row starting spot. Woods-Toth slotted quickly into second behind Norberg and the duo proceeded to drive away from the field, finishing 1-2 with a three-second back to third. Woods-Toth also posted the fast lap of the race to earn the bonus points towards the championship.  Leading Edge Motorsports’ Duekmedjian completed the podium, wrapping up a tremendous Senior debut as he overtook KartSport North America’s Travisanutto at one point to advance to third. Travisanutto just did not have the pace he enjoyed on Saturday, taking fourth ahead of CRG Nordam’s Olin Galli (CRG). 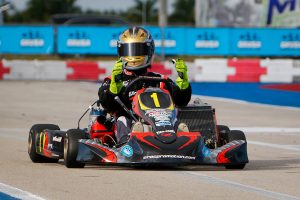 In Pro Shifter, Mad Old Nut Racing’s AJ Myers put his Croc Promotion chassis up front once again, completing the sweep of the weekend to add even more pedigree to his #1 plate.  Musgrave Racing Company’s Billy Musgrave (Aluminos) pushed Myers all day long, just as he did on Saturday, finishing in second in all three sessions.  Mathias Ramirez (Birel ART) was again the next in the order, qualifying fourth behind Andrew Bujdoso (Croc Promotion) before taking third in both the Prefinal and Final. CRG Nordam’s Kyle Wick moved forward all day after qualifying eighth, finishing fourth in the shortened 21-lap final after overtaking Bujdoso mid-race.  Taylor Greenfield (CompKart) rounded out the top-five.

In the Chuck G Fabrication X30 Master class, Rodrigo Piquet (Kart Mini) set the pace all day, spring-boarding off his Saturday victory. In the Final, Piquet was again up to the task, but an aggressive move to take the lead from Scott Roberts (Tony Kart) early in the race resulted in a five-second penalty, which was enough to drop him behind Renato David (Tony Kart) in the final tally. Roberts kept his ride moving forward after the contact and finished third ahead of Luis Schiavo (Exprit). Reigning Texas ProKart Challenge X30 Master champion Miguel Mier (Exprit) capped the top-five. 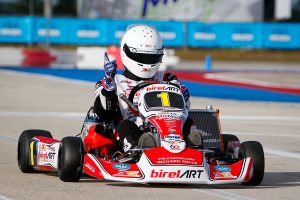 A pair of Speed Concepts Racing drivers dominated the action in Rolison Performance Group X30 Junior class. Luke Lange (Tony Kart) and Justin Arseneau (Tony Kart) quickly paired up to pull away from the field in the main, but before that, Lange topped qualifying as he maintained the momentum from his first national event win on Saturday. The Texan went on to win his Prefinal to secure the pole position for the 18-lap final. Arseneau timed in sixth and then chased Iron Rock Motorsports’ John Burke (Tony Kart) to the checkered in his Prefinal to secure a row two start for the main.  In the Final, Burke led from the green strongly but he was sadly forced to retire when his exhaust pipe elected to exit the rear of his kart in the infield section of the track. As a result, Lange and Arseneau were handed the lead and they took it and ran. After pushing away from the field to make it a two-driver battle, Arseneau eventually found a way to slip past Lange to assume the lead, which he would not relinquish. Lange chased the Canadian to the line to post a 0.159-second victory.  As the lead duo battled, Jeremy Fletcher (Tony Kart) closed quickly over the final laps but he came up short, taking the final step of the podium.  A third Speed Concepts Racing pilot – Luca Mars (Tony Kart) – was also in the hunt, posting the fastest lap of the race enroute for fourth in the official results. RPG’s Branyon Tiner (Kosmic) improved his pace steadily throughout the day, qualifying 13th and then posting the fastest lap in the Prefinal before finishing ninth. The Texan advanced from his ninth row starting spot in the final to score a well-deserved fifth place finish. 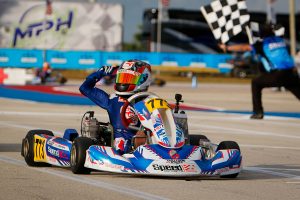 Kai Sorensen (Tony Kart) was a powerhouse in the Orsolon Racing Mini Swift class all weekend, running up front from Friday onward. On Sunday, the Californian swept the day as he pipped Saturday winner Miguel Costa (Parolin) by just 0.005 seconds in qualifying. Jakub Kolar (Praga) emerged in the Prefinal to pressure Sorensen throughout the race, but he was still able to stretch out to a one-second advantage at the end of the 11-lap dash. Saturday star Caleb Gafrarar (Birel ART) proved that his earlier performance was not a fluke as he settled into third, chasing the lead duo all race.  In the Final, Sorensen and Kolar again hooked up to pull away swapping the top spot as Gafrarar was again in hot pursuit. Sorensen positioned himself for success in the late going and capitalized, posting a 0.263-second victory. Kolar took second while Gafrarar recorded his second podium of the weekend, without a doubt a strong debut outing in the Mini Swift category. Noah Baker (Tony Kart) finished fourth after qualifying ninth in the morning. Christian Miles (Kart Republic) completed a day-long advancement, finishing fifth in the final tally after starting eighth.

The youngest drivers in the SKUSA program – the Medstep Racing Micro Swift class – turned in another trio of strong races, highlighted by the weekend-long dice between Matias Orjuela (Parolin) and Beckham Jacir (FA Kart). On Saturday, Orjuela was able to pull away from Jacir in the Final, but on Sunday, Jacir turned up the heat. The Miami, FL driver qualified on the pole over Orjuela and then won both the Prefinal and the Final to sweep the day.  The two fought back and forth in the main event, each taking turns in the lead although, in the end, Orjuela fell prey to Luis Umana (Tony Kart), who was able to get by to take second.  Karsyn Walters (Tony Kart) and Salim Hanna (Tony Kart) completed the top-five in the 20-kart category. 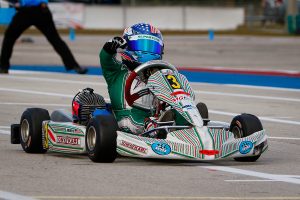 The Late Apex Kartworks KA100 Junior category drew a strong 17-kart grid for the opening rounds of the SKUSA Winter Series. Sunday action had MDR’s Dylan Christie (Kosmic) up front in both qualifying and the Prefinal. Christie outgunned William Cox (Tony Kart) by just 0.021 seconds in qualifying, and then took second in the Prefinal to Cox, only to have the winner DQ’d for an over-sized restrictor. In the Final, Mateo Rubio-Luengo (Parolin) was the driver to watch. After losing a chain in the Prefinal, Rubio-Luengo came from the tail of the field to take over the lead and the eventual win, running fast laps running over three tenths quicker than all but Cox and Christie. Kyffin Simpson emerged to finish second over Christie to complete the podium. Bryson Morris (Kart Republic) was fourth ahead of Cox in fifth.

Julia Boos (Tony Kart) added her name to the storyline in the Montoya Racing KA100 Senior class on Sunday, and she was up to the task of challenging Innovative Karting’s Colton Ramsey (Exprit) for the race win.  Ramsey took the pole over Boos by just over two-tenths, but Boos fought back in the Prefinal to score the win by just a tenth.  The duo ran together for all 18 laps of the Final, with Boos overtaking Ramsey on the final circuit to grab the win. Brett Harrelson skipped the qualifying and Prefinal sessions, but returned for the main event and was third. 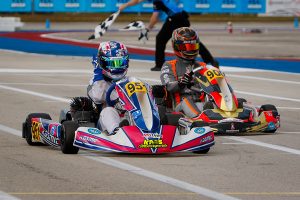 Two Briggs & Stratton 206 categories were again included on the Winter Series class line-up, and the racing was trademark four-cycle with quickly forming draft packs.  In the Senior class, Matthew Mockabee (Eagle) started the day on pole in qualifying, but in the Prefinal, a lead quartet was immediately formed including Colin Warren (VLR), Jack Copeland (Birel ART) and Hunter Fox (Birel ART). Warren played his cards right to be upfront at the end of the 11-lap Prefinal, and he topped the main event as well, holding back Copeland on the final run down the straightaway before the final corner. SKUSA officials went to the video marshalling system following the last lap, and deemed that Warren had blocked Copeland to get the win. The resultant penalty advanced Copeland to the top step of the podium, over Warren, Mockabee, Fox and Tristan Altman (Croc Promotion).

In the Briggs 206 Master class, Illinois’ Ryan Spierowski (Top Kart) turned the fastest lap in qualifying, as three drivers were within a tenth by the end of the seven-minute session. Dan Breitenstein (Birel ART) and Saturday winner Eli Yanko (Tony Kart) were both on-pace. Yanko and Breitenstein hooked up and pulled away in the Prefinal, but in the main event, Jorge Ruiz (TB Kart) added his name to the fight and the trio put on a great show. When the dust has settled, Ruiz emerged victorious with Breitenstein in second and Manny Sola (Birel ART) in third. Yanko had taken the provisional victory on-track but was DQ’d when his bumper was found to be detached post-race, advancing Ruiz to the win. The top-five was completed by Neil Breitenbach (MGM) in fourth and Spierowski in fifth.

The final two rounds of the two-weekend SKUSA Winter Series will bring the teams and drivers back to AMR Homestead-Miami Motorplex presented by MG Tires on the February 8-10 weekend, when they’ll run in the counter-clockwise direction.  The EKN staff will once again be trackside, providing our live streaming turn-by-turn coverage, behind-the-scenes social media images and video, race reports and our post-event Facebook Live Q&A.