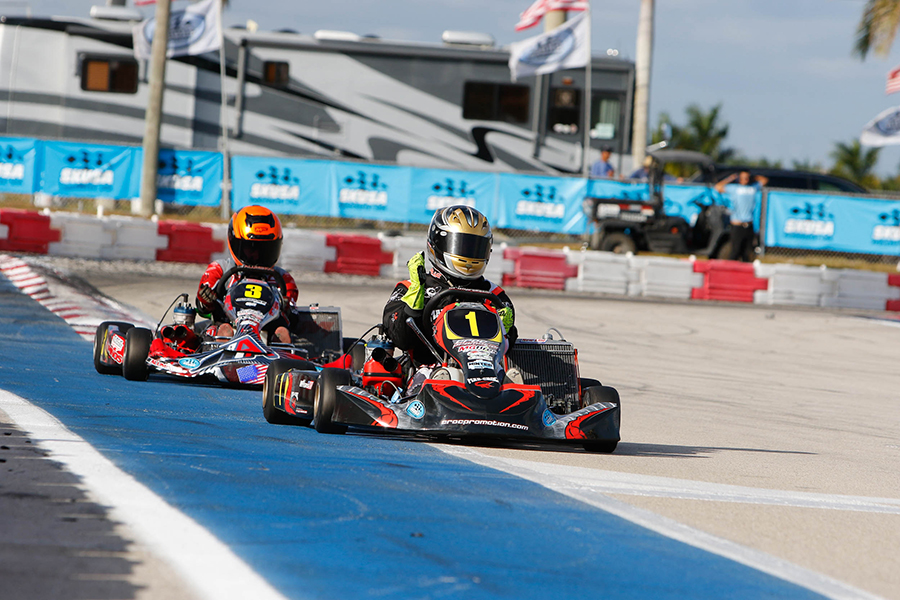 The opening round of the 2019 Superkarts! USA Winter Series enjoyed beautiful blue skies and mid-70s temperatures at the AMR Homestead-Miami Motorplex Presented by MG Tires on Saturday, as the track played host to over 230 drivers to kick off the new season. A strong field of over 50 competitors in X30 Senior was topped by reigning world champion Lorenzo Travisanutto (Kart Republic), who passed SKUSA #1 driver Ryan Norberg (Kosmic) on the final lap. In Pro Shifter, AJ Myers (Croc Promotion) was absolutely perfect all day as he held off the constant pressure of his chief rival Billy Musgrave (Aluminos).

In PSL Karting X30 Senior, Travisanutto was not the dominant force throughout the day. That honor belonged to Norberg, who was intent on paying off Mike Rolison for the confidence that the team owner showed in signing the reigning SKUSA champ for the 2019 season after he ‘parted ways’ with PSL Karting. Norberg dominated qualifying, topping impressive Senior rookie Arias Duekmedjian (Praga) by over a tenth. Canadian Patrick Woods-Toth was very quick as well, timing in third ahead of Jesus Rios Jr. (SoloKart) and Arthur Leist (Birel ART). Norberg and Rios won the two Prefinals that split the grid, qualifying the top-15 from each in the main. Felipe Nicoletti (Tony Kart) won the LCQ to start 31st in the main. 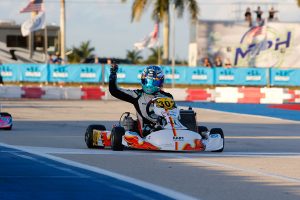 The final was all Norberg for 75% of the race. The Florida driver pulled away quickly to a one-second lead, but Travisanutto mounted his charge midway through the race as he moved to second and begin chipping away at Norberg’s lead. Running with KartSport North America on the Kart Republic, the Italian arrived on Norberg’s rear bumper with a few laps remaining and after hounding Norberg for the spot, he made his move on the final lap when Norberg ran a defensive line into the hairpin turn four to protect his lead. The American sacrificed his exit speed to defend from an inside move, and Travisanutto re-positioned himself to get a better exit and eventually passed Norberg on the exit of the next corner, the turn five hairpin, using an over-under to beat Norberg to turn six. Norberg was unable to mount a counter-attack, and Travisanutto won by 0.452-seconds. Duekmedjian joined the two superstars on the podium, completing an incredible Senior debut. CRG driver Olin Galli was fourth, ahead of Woods-Toth in fifth.

A highlight of the X30 Senior main was the emergence of the Senior rookies, led by Duekmedjian. SKUSA SuperNationals X30 Junior race winner Jeremy Fairbairn (Tony Kart) finished sixth, ahead of Thomas Nepveu, another class freshman. Last year’s Winter Series X30 Junior champion Sebastian Montoya (Tony Kart) was also strong, finishing 10th. Zane Maloney turned in what might have been the drive of the day, coming from 44th to 12th over the 25-lap distance. 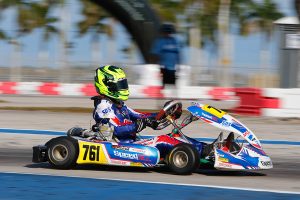 Luke Lange emerged with his first national win after a tremendous pass for the victory in X30 Junior
(Photo: On Track Promotions – otp.ca)

A total of 56 drivers posted qualifying times in Rolison Performance Group X30 Junior, running split qualifying sessions. Diego Contecha (Tony Kart) topped qualifying over Luca Mars (Tony Kart) and Luke Lange (Tony Kart), and then SKUSA split the class into two separate Prefinals, each of which qualified 15 drivers straight into the main. Contecha and Mars scored the wins in their respective Prefinals to lock out the front row for the final. The remaining 14 positions on the grid were added through the LCQ, which was won by Mateo Rubio-Luengo (Parolin). In the main event, Contecha and Lange found themselves in an all-out battle for the race win and it was Lange who rose to the occasion, making the move to take the lead and the victory. Contecha was second, ahead of Santiago Trisini (Kart Republic). Timo Kucharczyk (Parolin) and John Burke (Tony Kart) completed the top-five.

The X30 Master class, sponsored by Chuck G Fabrication, featured 21 drivers and was paced for a majority of the day by former SKUSA SuperNationals winner Renato David (Tony Kart). David dominated qualifying by almost four tenths over Florida driver Scott Roberts (Tony Kart). Rodrigo Piquet (Kart Mini) timed in third, and then advanced to second in the Prefinal behind David. In the 22-lap main, David and Piquet pulled away with David controlling a significant advantage. Over the course of the race, Piquet chipped away at the lead and then made a move for the win on the final lap, slipping past the leader to score the win. David finished second, chasing Piquet to the finish, while Roberts completed the podium in third. Pedro Cabrera (CRG) and Luis Schiavo (Exprit) finished fourth and fifth, respectively.

SKUSA added the KA100 Junior and Senior classes to the Winter Series line-up, drawing 18 drivers for the Junior category, which was sponsored by Late Apex Kartworks. Mateo Rubio-Luengo (Parolin) qualified second and then handled both the Prefinal and Finals to score a 4.502-second win over Dylan Christie (Kosmic), Bryson Morris (Kart Republic) and Santiago Biagi (Exprit). In stark contrast to the strong grids in the other 10 classes, Montoya Racing KA100 Senior drew just two drivers. Colton Ramsey (Exprit) ran unchallenged to the win over Brett Harrelson (FA Kart). 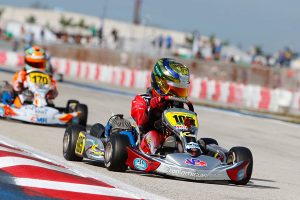 Late-race contact in Mini Swift opened the door for Miguel Costa to get back into the fight, and he capitalized with the win
(Photo: On Track Promotions – otp.ca)

Jakob Kolar (Formula K) was the driver to beat out of the box in Orsolon Racing Mini Swift, outgunning Nikita Johnson (Energy) in qualifying. In the Prefinal, class rookie Caleb Gafrarar (Birel ART) became the star of the show, advancing from seventh on the grid to take the lead from Kai Sorenson (Tony Kart). Gafrarar, who moved from Parolin to PSL Karting in the off-season, impressed the paddock in leading for half the 11-lap dash only to have Sorensen slip past in the final corner to take the win. In the main, Gafrarar slotted into fourth early but worked his way methodically forward to take the lead from Sorensen before the midway point. The two drivers pulled away from the rest of the field as Sorensen showed patience, although not quite enough. An ill-fated overtake attempt in turn four with less than an handful of laps remaining resulted in significant contact, which slowed Gafrarar and push Sorensen back to eighth. This contact allowed Alex Powell (Energy) and Miguel Costa (Parolin) to drive through to battle for the race win, and it would be Costa who took the win by 0.299 seconds from Powell. Christian Miles (Kart Republic) finished third on-track, but a penalty for jumping the start dropped him down the order and promoted Gafrarar back to the podium in third. Jack Jeffers (Benik) and Anderson Leonard (Tony Kart) rounded out the top-five.

Matias Orjuela dominated the Medstep Racing Micro Swift category, topping all three on-track sessions on Saturday. The Parolin pilot nabbed the pole in the morning session with a lap of 52.918 to top Beckham Jacir (FA Kart), who was Orjuela’s primary challenger all day. In the Prefinal, Orjuela jetted away early and score a 3.005-second win over Jacir, who was chased all race by Salim Hanna (Tony Kart). In the 20-lap main, Orjuela tried to run away, but Jacir stuck with the leader for a majority of the race, even leading for a time. Over the final laps, Orjuela used his consistency to pull away to build a small gap, taking the checkered flag by 0.398 seconds over Jacir. Enzo Vidmontiene (Tony Kart) made a last lap pass to finish third over Luis Umana (Tony Kart) and Karsyn Walters (Tony Kart).

For the second year, SKUSA included the Briggs 206 program with Senior and Masters categories. Jack Copeland (Birel ART) topped both qualifying and the Prefinal over reigning SKUSA Winter Series champion Colin Warren (VLR). Matthew Mockabee (Eagle) was third in both sessions. In the main, Hunter Fox (Birel ART) added his name to the mix, leading early in the going. All four drivers took turns leading, but Warren took his time up front on the final lap, taking his fifth straight SKUSA Winter Series main event win, adding to his sweep of the four races in 2018. Mockabee and Copeland completed the podium in second and third. Fox and Tristen Altman (Croc Promotions) completed the top-five.

Eight Masters 206 drivers were added to the line-up, and local driver Dan Breitenstein (Birel ART) set the pace in qualifying and the Prefinals. Canadian Eli Yanko (Tony Kart) has an issue in qualifying but advanced to third in the Prefinal. Yanko moved quickly to second in the main before Breitenstein retired on lap 9, handing the lead to Yanko, who would become embroiled in a battle with Jorge Ruiz (TB Kart). After swapping the lead in the late going, Yanko scored a narrow win. Neil Breitenbach (MGM) completed the podium in third.

The teams and drivers will be back in action on Sunday for Round #2 of the program.