EKN’s Paddock Insider is part of the Trackside coverage, bringing you notes, updates and breaking news as it happens. The article will be a timeline of events as they happen during the 2018 World Karting Association Daytona KartWeek from the Daytona International Speedway in Florida. The information will not be seen anywhere else. Please feel free to comment and discuss our coverage and today’s action in the EKN Global Members Discussion area below. Make sure to tune in all weekend long to the live audio and live timing at eKartingNews.com/live 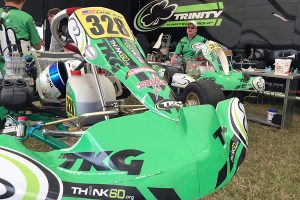 Trinity gearing up for a solid 2019 season (Photo: EKN)

Based out of Ohio, Trinity Karting Group is primed for another full season of racing in 2019. The driver development operation is back in Daytona with seven drivers under their tent here this weekend. Following the action here, they travel down to Miami to enjoy a few days at the beach before preparing on the opening event of the year, the SKUSA Winter Series at AMR Motorplex. TKG is set to for both events in Homestead-Miami in January and February along with the full SKUSA Pro Tour. They are among the many teams to purchase one of the new IAME SSE shifterkart engine for the 2019 season. Team driver Gavin Bayliff is set for the Pro Shifter category in Florida and on the Pro Tour. But first, the team is focused on this weekend with all seven drivers in IAME categories aboard Tony Kart. 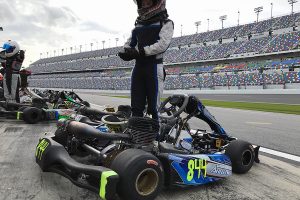 The IAME KA100 engine platform is making its debut in road racing at Daytona (Photo: EKN)

The first event in 1974 at the Daytona International Speedway was road racing. Karts hit the high banks that year for the first ever KartWeek, running the 24 Hour circuit. Aside from a few years where there has not been an event, road racing has always made a home at Daytona between Christmas and New Year’s Eve. Over the last decade, the genre has suffered some lower numbers due to the lack of interest of running on the big car tracks. Thanks to the Briggs & Stratton 206 engine, new faces have hit the road racing series and as the event here in 2018 is showing, they brought more new people. The IAME Senior and Briggs 206 classes seem to be the largest. Another new class is bringing in KA100 engine package. Roughly 15 Senior and Junior drivers are jumping on the high banks for the first time with the IAME engine. Another great part of the Road Racing community is the unity throughout the country for going fast. A number of drivers from the west coast through the NCK Road Racing organization made the trek east to take on Daytona. The only way to continue to grow Road racing is bringing new people into the sport and working together with other series. 2019 could be a year of growth for the program. 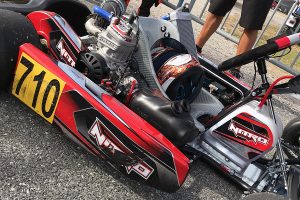 This weekend in Daytona marks the launch of the new Nitro Kart Junior/Senior chassis. The ‘no name’ model is manufactured by Parolin, who does the Cadet model that has been so successful throughout the last two seasons, earning the WKA Manufacturers Cup Series Chassis Trophy in 2018. Nitro Kart’s Nick Tucker says the chassis was based more around certain components rather than changing the 30/32 tubing. There are four here competing, one in each category (IAME Senior, IAME Junior, KA100 Senior and KA100 Junior). Tucker is more confident in the KA100 division with the chassis, having won at New Castle in Yamaha competition with team coach Ashley Rogero. However, he is seeing the chassis working well in the IAME categories after a few sessions working with Edward and Jonathan Portz from the west coast. The chassis is ready for purchase directly from the North Carolina headquarters. 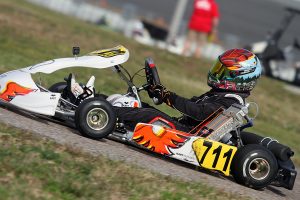 Released the day of practice, KartSport North America confirmed Brent Crews racing under the tent aboard the Kart Republic. The 10-year-old is coming off an amazing 2018 season, including a repeat win at the IAME International Final and winning the 2018 Rotax Max Challenge Grand Finals in Brazil. Moving up to the Junior ranks, Crews is competing in both IAME and KA100 Junior divisions this weekend. This is not the first time aboard the Kart Republic, having utilized the chassis in France this October. Read more about his move in the official press release.