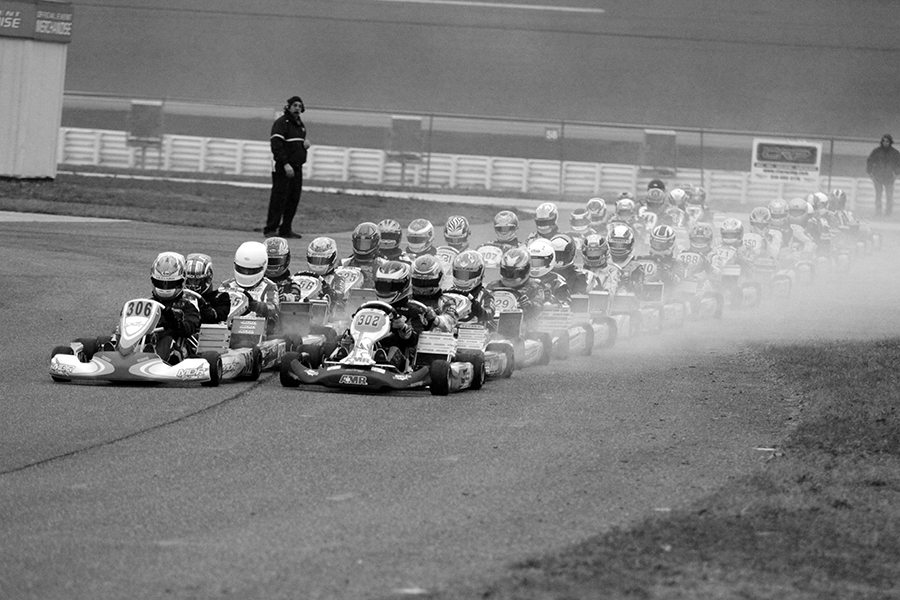 Christmas is over and the calendar is set to turn onto another year. That signals the annual trip to Florida for the World Karting Association Daytona KartWeek. The event is once again welcoming three genres of the sport at the Daytona International Speedway – Sprint, Road Race, and Dirt Oval. The Manufacturers Cup Series will contest the Margay Sprint Nationals around the 7/10-mile sprint course inside the facility near NASCAR turn 3 and 4. Vega Road Racing Series continues to be the pinnacle of the event since the first time karts hit the high banks of the DIS in 1974. Completing the trio of events is the Maxxis Dirt World Championship outside NASCAR 1 and 2 around the 1/4-mile track. The ‘World Center for Racing’ is now home to hundreds of karters from across North America from December 27-30.

The EKN Trackside Live coverage will be focused on the Manufacturers Cup Series event throughout the weekend, including live broadcast available at www.ekartingnews.com/live. Those not in attendance can listen to the race call while viewing the live timing as the event unfolds. The EKN Live program is possible thanks to our broadcast partners Stilo, KartSport North America, and Comet Kart Sales. Be sure to follow the updates through the EKN Social Media pages, including a visit to the Road Race and Dirt programs on December 28. 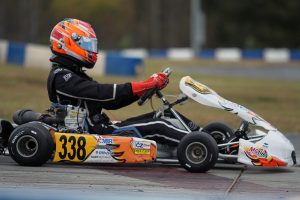 Former Daytona winner Brandon Jarsocrak is among the many contenders in IAME Senior (Photo: EKN)

Friday, December 28 is practice day for all nine categories at the Manufacturers Cup Series with racing set to take place on Saturday, December 29, and Sunday, December 30. Each day of racing consists of one round, with includes qualifying, Prefinal and Final before the sun sets over the west high bank of the DIS oval.

Big fields always show up for KartWeek because who doesn’t want to win at Daytona? The IAME Senior field is stacked with 30 drivers pre-registered and more expected, including some new names in new rides. One of them being series champion Austin Garrison, who is not registered but rumored to be racing in Daytona, not aboard the Fullerton he was on throughout the 2018 season. No stranger to DIS, Brandon Jarsocrak won in 2015 and 2016, missing out on the top step both days in 2017. The KartSport North America driver has yet to give Kart Republic a win at the famed DIS, and the team is stacking the deck by bringing in 2017 Daytona KartWeek Junior winner Zane Maloney. The Barbados driver stood on the podium in his KR debut at SuperNationals 22, returning for more. Add in Pauly Massimino, and KSNA is gunning to sweep the podium. 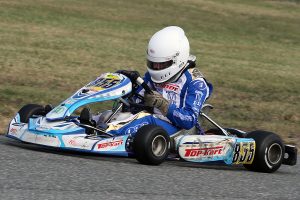 In their way are former WKA champions and other contenders. Brandon Lemke and Alexander Kardashian are the last two champions before Garrison. Lemke is back home with Franklin Motorsports and Team FMS/Merlin for 2019, joined by Senior rookie Kyle Thome. Kardashian (AMK / Top Kart) was off the podium both days last year, vying to return to the steps. A driver who did stand on the podium last year was Austin McCusker, as the IMSA driver comes back for more aboard his MDR / Kosmic machine. Edward Portz was a podium finisher in 2017, in the Junior ranks. The west coast driver is making the long trip over to Florida, joining the Nitro tent aboard their new Senior chassis. More on that throughout the weekend. Add in 2018 WKA Junior champion Josh Green (MDR / Kosmic), Trinity Karting Group’s Gavin and Finnegan Bayliff, and there is at least 1/3 of the field fighting for the two wins in Daytona.

Inaugural WKA KA100 Senior champion Blake Hunt and Daytona winner Colin Neal are both absent from the event in 2018, leaving room for new names to add to the record books. Great racing should be seen all weekend in this category, featuring a number of fast cats. One of them is Margay’s Spike Kohlbecker. A former winner at Daytona in the Junior ranks, Spike focused on open wheel racing in 2018 and is set to head to New Zealand to race in 2019. Before he does, he’s making his KA100 Senior debut in Daytona. With the removal of the Yamaha divisions for the first time in WKA history, Alexander Kardashian will attempt to extend his win streak in 100cc action at Daytona. Kardashian (AMK / Top Kart) swept the weekend last year in Yamaha, vying for the same in KA100. Top Kart is loaded with talent in the category, including former WKA champion Dakota Pesek, ROK the RIO podium finisher Abby McLaughlin, and WKA Junior champion Kaden Wharff, making the jump to Senior. Brad Brittin was the quickest driver throughout the weekend last year, earning a runner-up finish. He will not be the only Merlin in the field with Taylor Maas moving up to Senior for 2019. Emory Lyda announced he has left the Merlin Nation, jumping over to the Nitro team aboard the new Nitro Kart Senior chassis, making his debut with the ride in Daytona. 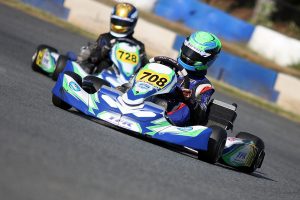 Connor Ferris is among the more experienced drivers in the young IAME Junior field (Photo: EKN)

The departure of many contenders in the IAME Junior division has the category looking much younger, including a number of drivers making their Junior debut in Daytona. Connor Ferris (Top Kart) finished third in the standings in 2018, and is now the elder of the category heading into Daytona. West coast driver Jonathon Portz is another driver with experience coming into the weekend to watch, helping to make the debut of the Nitro Kart chassis in the Junior ranks. Connor Zilisch moved up to Junior last year, however, will make his first start in Daytona in the Junior category. Zilisch (LAK / Tony Kart) was among the standout Junior drivers at the end of 2018. Following Zilisch is Brent Crews, Jeremy Fletcher and Annie Rhule. Crews, the 2018 WKA Mini Swift champion, is still 10-years-old, but with the new WKA rule change for minimum age, is allowed to move up to Junior classes. Fletcher (Tony Kart) and Rhule (Kart Republic) finished third and fourth in the WKA standings last year in Mini, spending the weekend adjusting to the full size kart this weekend.

The KA100 Junior division is making its debut at Daytona and as a championship division in the Manufacturers Cup Series, replacing Yamaha Junior. It is a great mix of returning drivers, new names and youngsters moving up from Mini. Donald Whorton II (FA Kart) has the most experience in the field for the KA package, winning at the WKA race at GoPro in October and finishing second in the USPKS standings in 2018. Behind him was Erikson Evans (DCT / Kosmic) and Westin Workman (TT / CompKart), who will be in Daytona. Both Dylan Christie (MDR / Kosmic) and Connor Zilisch (LAK / Tony Kart) were on the podium at SuperNats 22 in the category, and will be among the contenders in Daytona. Top rookies include WKA champion Brent Crews and Mateo Rubio-Luengo, who won in Mini last year at DIS. 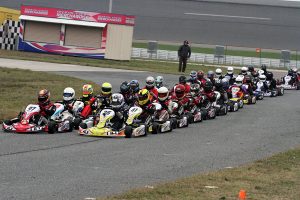 Margay Ignite is the largest category of the event for 2018 KartWeek (Photo: EKN)

The largest and most interesting category of the weekend will be the return of the Margay Ignite ‘Dash at Daytona’. The spec package focused on the Briggs & Stratton 206 powerplant aboard the Margay K3 chassis gives drivers new and old the opportunity to enjoy an arrive-and-drive package at Daytona. Last year in its debut, IndyCar drivers Zach Veach and Gabby Chaves grabbed the victories and are back to defend their wins. IMSA drivers Juan Piedrahita and James French are joining them this year. They will battle some top drivers of the Ignite program with 42 total drivers to hit the track, including Battle at the Brickyard winners Charlotte Lalonde from Canada and Jeff Dolian. 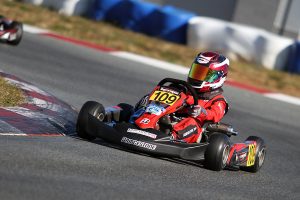 Sebastian Ng is among the contenders in the Mini Swift category (Photo: EKN)

New for 2019 season on the WKA Manufacturers Cup Series program is the Briggs 206 Cadet division. Nearly at 30 entries, this category replaces the Yamaha Sportsman class brings together Mini and Micro-aged drivers together in the spec powerplant class, which should produce some exciting racing. The class is mixed with veteran WKA racers and new faces to the series. Those already taking advantage of the class offered in two race weekends in 2018 include race winner Danny Dyszelski (Tony Kart), Sebastian Ng (Nitro Kart), Ben Maier (Nitro Kart) and Aryton Grim (Nitro Kart). Those are among the handful doing double duty on the weekend as well. More about who will step up and be among the contenders in Daytona and throughout the season will come when karts hit the track on Friday.

The departure of a number Micro Swift standouts in 2018 leaves room for new drivers to emerge as winners and championship contenders for 2019. Aryton Grim (Nitro Kart) leads a group of returning drivers, along with race winner Hoyt Mohr (Nitro Kart) and Carson Weinberg (Nitro Kart). The class is also welcoming some Kid Kart graduates, among them are 2018 champion Hudson Floyd (Nitro Kart) and Sam Tutwiler (Nitro Kart). At 26 pre-registrations, the class is showing growth in WKA competition.

The Kid Kart division is making a return to the Daytona KartWeek for the first time since 2015. Nearly 20 drivers will take part in the class, with a mixture of returning drivers and new names to the series.