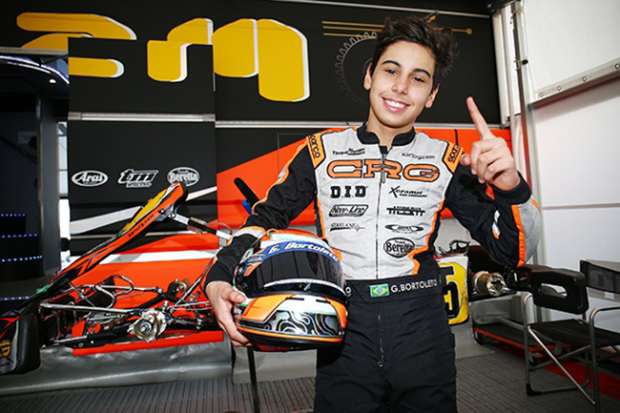 The CRG Racing Team announced two important drivers for the 2019 line-up and the race program for the next season.

CRG made official two new entries in its 2019 drivers’ line-up: Enzo Trulli was announced for the OK Junior class and Gabriel Bortoleto for the OK. Both drivers are confirmed from last year in the CRG Racing Team, underlining their will to continue the positive work done together.

Enzo Trulli, 14 years old, son of the former F1 driver Jarno, that follows him as coach on track, is about to start his 2nd season in OK Junior, after making a good impression with a constant growth in his first year in international karting. He achieved two victories in 2018 (the Margutti Trophy and the DKM in Lonato), but he mainly made a lot of experience to be used in his second year in OK Junior.

The relationship between Gabriel Bortoleto and CRG is even more consolidated, if we think that the young Brazilian grew up in an external CRG team in 60 Mini and he’s been protagonist for two seasons in OK Junior with the Factory Racing Team. Many important results were achieved last year, as the 3rd place at the European Championship and the 3rd place at the World Championship. Already in the last two WSK races of the season, Gabriel started in the OK class being immediately fast. In 2019 he will make a complete program in OK in the FIA races, but also a program in the KZ2 category is not excluded, which will be decided after making some tests at the beginning of the season.

Trulli and Bortoleto join the confirmed Paolo De Conto in KZ, Pedro Hiltbrand (KZ and OK), the Luyet brothers in KZ2 and the French Théophile Naël in OKJ. In the next weeks, more drivers will be made official, after defining some contract details, but the goal is reducing the total number of drivers compared to the last season.

CRG announced also a restriction in the racing program, with the goal of making the racing team activity more functional to the company’s needs. The 2019 goal is concentrating on the FIA events (European and World Championships), whose role is promoting karting and they represent the most renowned technical contest, whilst our presence in secondary international events will be strongly reduced, as they penalize the activity in National Championships and don’t have an important return in technical terms and of image. On these issues, CRG has several times tried to bring the attention of operators and the international sporting authority to reduce the international races, but unfortunately there will be more than 25 races also in 2019. A reduction of races for the CRG Racing Team means also being able to provide a better assistance to our customers and partner teams committed in the National Championships and in the most important single-brand trophies in terms of sales.