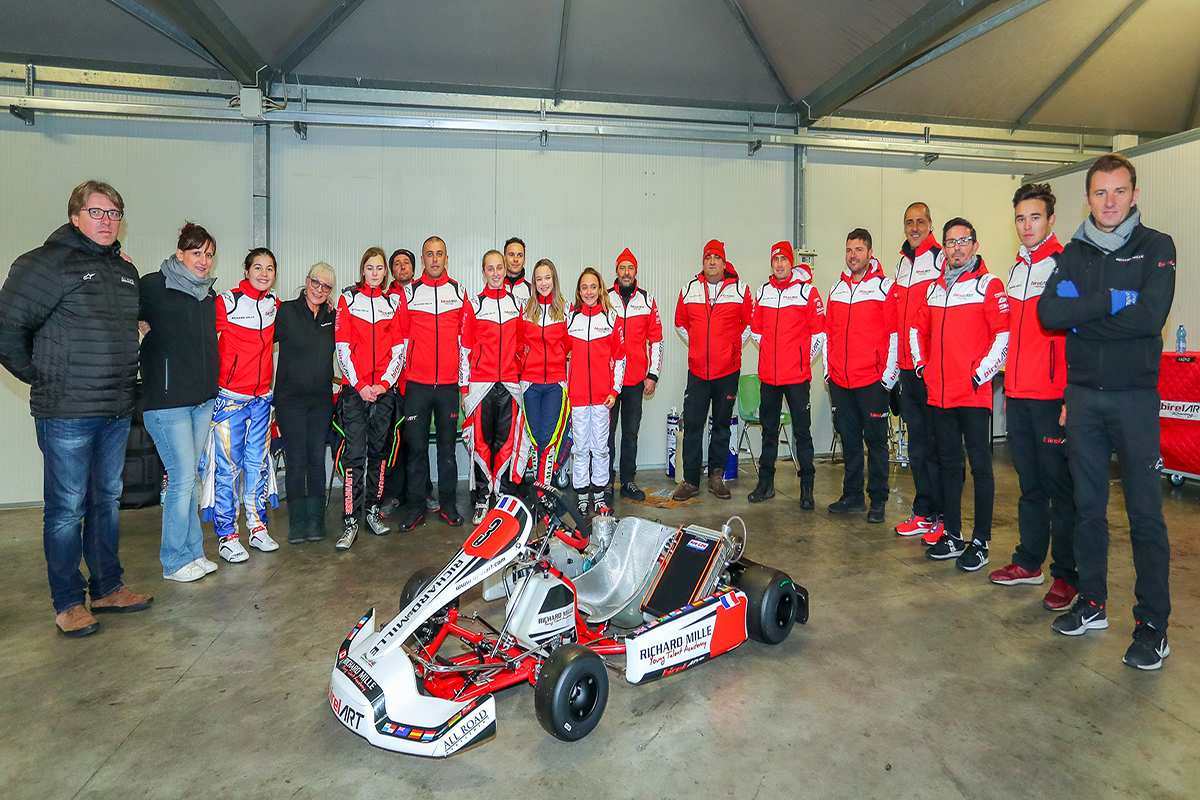 A few days after the selection organised at Le Mans in single-seaters, the Richard Mille Young Talent Academy unveiled another of its objectives, this time in karting at Lonato. In a similar procedure, six girls aged from 13 to 17 were assessed to form a two-driver women’s team for the 2019 international season. Brazilian Julia Yaoub was chosen to wear Richard Mille’s colours in Junior and the Spanish driver Maya Weug was selected in OK.

“I would like to thank Richard Mille for continuing his work with young talents with us,” said Ronni Sala, President of Birel ART Group. “Karting has had great female drivers in its history, but it seems to be more difficult now for young women to compete at a high level. Our joint initiative is part of a longer-term project to ensure them the representation they deserve.”

Welcomed to Lissone, the six participants were able to explore the Birel ART factory and get to know the Racing Team before proceeding with the preparation of their equipment and adjusting their driving position. Each with their own kart, the technicians ensured the equivalence of the equipment within the two categories.

The next morning they arrived at the famous circuit of Lonato in rather cold weather to begin the phase of evaluation of their driving. After three track sessions to learn the track of South Garda Karting, they learned lessons during a debriefing with Davide Foré, the Team Manager of Birel ART Racing.

The end of the morning included two sessions on new tyres to observe their implementation and their pure performance. To complete this active selection phase, two other sessions were scheduled in the afternoon, the last of which was again on new tyres.

Composed of Ronni Sala (Birel ART), Davide Foré (Birel ART), Debbie Gourdon (Richard Mille), Amanda Mille (Richard Mille) and Morgan Caron (All Road Management), the jury then met to take stock of the speed and the consistency of the contenders behind the wheel, also taking into account their general attitude and ability to communicate.

At the end of the deliberations, Maya Weug was chosen in OK, thanks to her mastery and experience of international competition. Fast and dynamic, Julia Ayoub (BRA) was selected in Junior. They will have the chance to participate in a complete international season in 2019 under the colours of Richard Mille within the Birel ART Racing Team.

“I had the pleasure of meeting six bright and motivated girls,” said Debbie Gourdon, Richard Mille’s representative. “The choice was not easy, but some criteria were decisive. It is important for us to support women in motorsport. Along with Enzo Valente, selected last week in F4 at Le Mans, we now have a nice formation of young hopefuls to defend the colours of Richard Mille next year. The Richard Mille Young Talent Academy could not start under better auspices!”