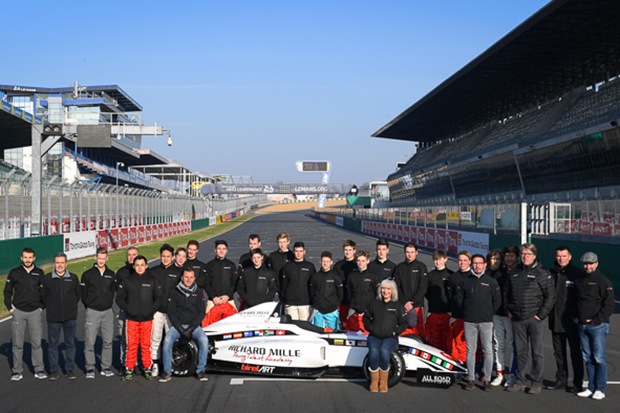 Thanks to the support of Richard Mille, Birel ART has taken up the challenge of creating a real bridge between karting and cars. This great first, marked by undeniable success, is expected to continue with Birel ART drivers selected from their country by the brand’s distributors as well as the Birel ART Racing Team. After a rigorous selection procedure, the French driver Enzo Valente stood out. His participation in the 2019 French F4 Championship will be fully supported under the colours of Richard Mille.

“We are very pleased with the success of the first edition of the Richard Mille Young Talent Academy that has just finished,” said Ronni Sala, President of Birel ART Group. “It’s an incredible chance for the Birel ART drivers to be able to highlight their talent in view of their future in car racing. Although only one candidate has been rewarded, this is the rules of the game, and all participants were able to enjoy these two days at Le Mans to improve their physical abilities and concentrate their minds. They also had the chance to drive the F4 FFSA Academy car on the famous Bugatti circuit. I would like to thank Richard Mille for his essential involvement in this event, as well as the professionalism of the FFSA Academy teams.”

18 Birel ART drivers from 15 countries on five continents were selected by Birel ART importers, and by the Racing Team, to meet at Le Mans on 13th and 14th December 2018. Welcomed to the premises of the FFSA Academy, they were able to appreciate the facilities of the French organisation during the physical and mental evaluations implemented by Dr. Ceccarelli’s Formula Medicine team. They then completed rapid training in the handling of the French F4 and the subtleties of the Bugatti circuit under the guidance of an instructor from the FFSA Academy.

On Friday morning, the weather was cold but beautiful on their arrival in the pits of the famous 24 H of Le Mans. Divided into two groups, they finally took the wheel of an F4 for two track sessions. In order to ensure full equality, the weight of the cars was harmonised and each driver had his own set of tyres. The exercise proved complex for the less experienced of them and a first selection was made before the lunch break. Nine candidates were selected for the final phase as the tension became palpable. The top six were invited to take the track again for a second session that determined the three finalists. In a final run, using new tyres, the contenders were measured one last time against the clock.

Fast and consistent, Enzo Valente (FRA) made the difference and won against Nicky Hays (USA) and Luigi Coluccio (ITA), especially as his evaluations by Formula Medicine were very positive and his overall attitude had made a very good impression on Debbie Gourdon, the representative of Richard Mille. Valente was therefore offered his participation in the 2019 French F4 Championship under the colours of Richard Mille. Thanks to the support and passion of the famous luxury watch manufacturer, this is the first time that a manufacturer, Birel ART, has been able to offer an opportunity of this kind to the top drivers of its brand, a prestigious award that validates the concept of the first real bridge between the karting and cars.

“We are always working with our eyes on the future,” said Richard Mille. “It’s very important for us to support the next generation and bring the stars of tomorrow to the fore today. Encouraging human talent and pushing the limits of technical prowess are two sides of the same coin.”