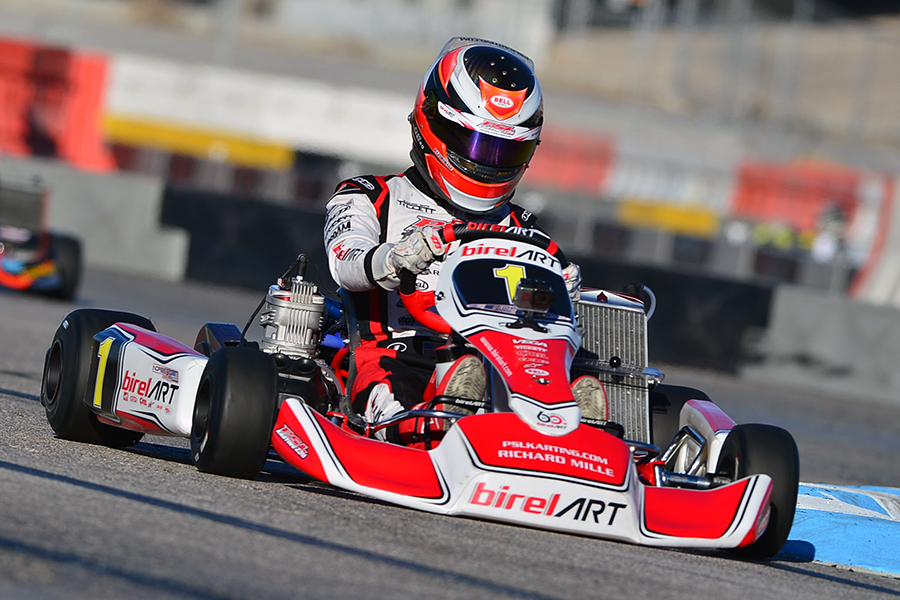 Ryan Norber finishes in the #1 spot for a second straight year in the TaG Driver Rankings (Photo: On Track Promotions - otp.ca)

It was an exciting 2018 season in the sport of karting here in North America. An incredibly busy year from January to November saw racing from coast-to-coast virtually every weekend at the national and regional level. As we look to turn the page on the season and begin focusing toward 2019, we need to finalize the standings of the EKN TaG Driver Rankings Powered by Bell Racing USA. While major points were up for grabs at the SKUSA SuperNationals 22, the order at the top remained unchanged through the November event as last year’s #1 Ryan Norberg went wire-to-wire in 2018 to end as our TaG Driver of the Year.

Norberg (PSL / Birel ART) earned his unprecedented third straight SKUSA Pro Tour title in August, making history to become the first driver to do so. Combining that effort and the rest of his 2018 results, Norberg held onto the top position in the EKN Driver Rankings all year long. Canadian Samuel Lupien finished the year in second, providing Norberg with a real challenge throughout the season in both the SKUSA Pro Tour title chase and the EKN Driver Rankings. Lupien (RPG / Kosmic) earned the SKUSA #2 plate for the 2019 season, despite not gaining that elusive SKUSA Pro Tour victory in 2018. His major victory of 2018 came at the US Open/Rotax Grand Nationals in July. Similar to Norberg and Lupien, Dante Yu was unable to improve his score at the SKUSA SuperNationals 22. Yu (CompKart) kept all four wheels on the ground this year, but unfortunately recorded a second-straight DNF in Las Vegas. The best finish of the top-three was Norberg in 25th.

Brandon Jarsocrak made it 4-for-4 at the top in drivers unable to improve their rankings score at the SKUSA SuperNationals. The two-time United States Pro Kart Series champion was among the leaders in what was a wild last lap skirmish, one that included Lupien. On the last lap, Lupien was put into the wall on the exit of turn one. Jarsocrak (KSNA / Kart Republic) had the same thing happen in turn six. Overall, it was still a solid season once again for Jarsocrak, picking up wins in USPKS, SKUSA and WKA competition. Ryan MacDermid was able to improve his score in the EKN Driver Rankings with a podium finish at SuperNats 22. The Canadian carried the #6 in honor of his mentor Robert Wickens, jumping up to fifth in the wild last lap to improve his spot to fifth in the EKN Driver Rankings.

Alex Bertagnoli was moved down to sixth with the improvement from MacDermid. It was a challenging week in Las Vegas for Bertagnoli, still adjusting to his new ride with CompKart, and he was unable to qualify for the main event. Alex was not alone, as a number of top drivers missed SuperSunday action, including #10 Austin Garrison. The WKA champion struggled in Vegas after performing strongly all season aboard the Fullerton chassis. Christian Brooks (Nash / FA Kart) dropped to seventh, but still improved his score. Brooks was among those in the battle for the win, and went for the lead in turn four on the final lap. Contact with 2018 world karting champion Lorenzo Travisanutto triggered the craziness that followed, and Brooks was officially classified in  14th.

Top Senior rookie Hannah Greenemeier (RPG / Kosmic) qualified for the main event in her first-ever SKUSA SuperNationals start. Greenemeier was unable to finish however, thus leaving her total unchanged from October which left her slotted in eighth. Joseph Daniele (RPM / Tony Kart) nearly edged Greenemeier out for top rookie. The California ProKart Challenge champion added an 18th-place finish from the SuperNationals to his 2018 total, moving up to ninth to close out the 2018 Driver Rankings. Callum Bradshaw (CRG Nordam) was the only driver to fall out of the top-10, ending up 22nd after losing his podium finish from the SuperNationals last year, unable to qualify for SuperSunday this year. 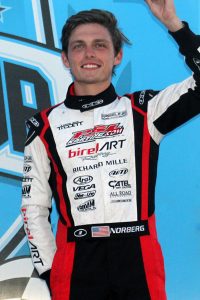 A record-setting season for Norberg was completed in 2018. Norberg has now earned a third straight SKUSA Pro Tour championship, the first driver to do so. It was not without a challenge, in one of the most competitive title chases in recent years that went down to the wire. For the Driver Rankings, Norberg was able to control the top spot wire-to-wire, never relinquishing the #1 position. With an up-and-down week in Las Vegas, Norberg came close to losing the top spot, but he escaped leading the EKN standings at the end of the season. Norberg was unable to replace his podium finish from 2017, ending up 24th on SuperSunday. The perk of the SuperNationals was Norberg receiving the EKN ticket to the Mazda Road to Indy USF2000 $200k Scholarship Shootout. Looking to 2019, what does the season hold for Norberg? We’ll have to wait to find out. 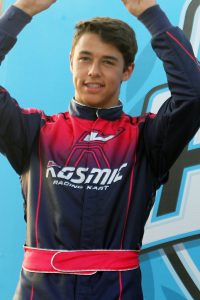 The 2018 season ended as ‘what could have been’ for Samuel Lupien. The Canadian was in the hunt for the SKUSA Pro Tour title heading into the SummerNationals, only to have a mechanical issue strike him on Saturday to remove his chances for the crown. At the SuperNationals, Lupien was in the hunt for victory along with his brother Cedrik and RPG teammate Ben Cooper. Samuel was third at the white flag but, on the exit of turn one, he was put into the wall, suffering a bent axle that sent him out of the race. That not only took away a chance at the SuperNationals victory, but removed his ability to overtake Norberg in the EKN Driver Rankings standings. Had Lupien finished 14th or better, Lupien would have finished in the #1 spot. Lupien leaves 2018 thinking what could have been. Will it be redemption in 2019? 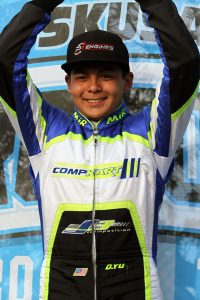 2018 was an improvement for Dante Yu. The California driver had shown the speed at the regional level, and proved that once again in 2018. Winning his final two races in 2017 at the California ProKart Challenge, Dante added three wins to extend his streak to five over the last two seasons. Included in this total are two victories at the Streets of Lancaster Grand Prix. With the success on the temporary circuit there, it was assumed that momentum would transfer over to the SuperNationals. Last year ended with Yu flipping over and continuing on SuperSunday. In 2018, Dante struggled in the heat races and retired early in the main event. That left his Driver Rankings total unchanged from October, keeping him on the rankings podium to close out 2018. His first career SKUSA Pro Tour victory at the SpringNationals, in addition to repeating at SOLGP, will be the highlight for Yu in 2018.