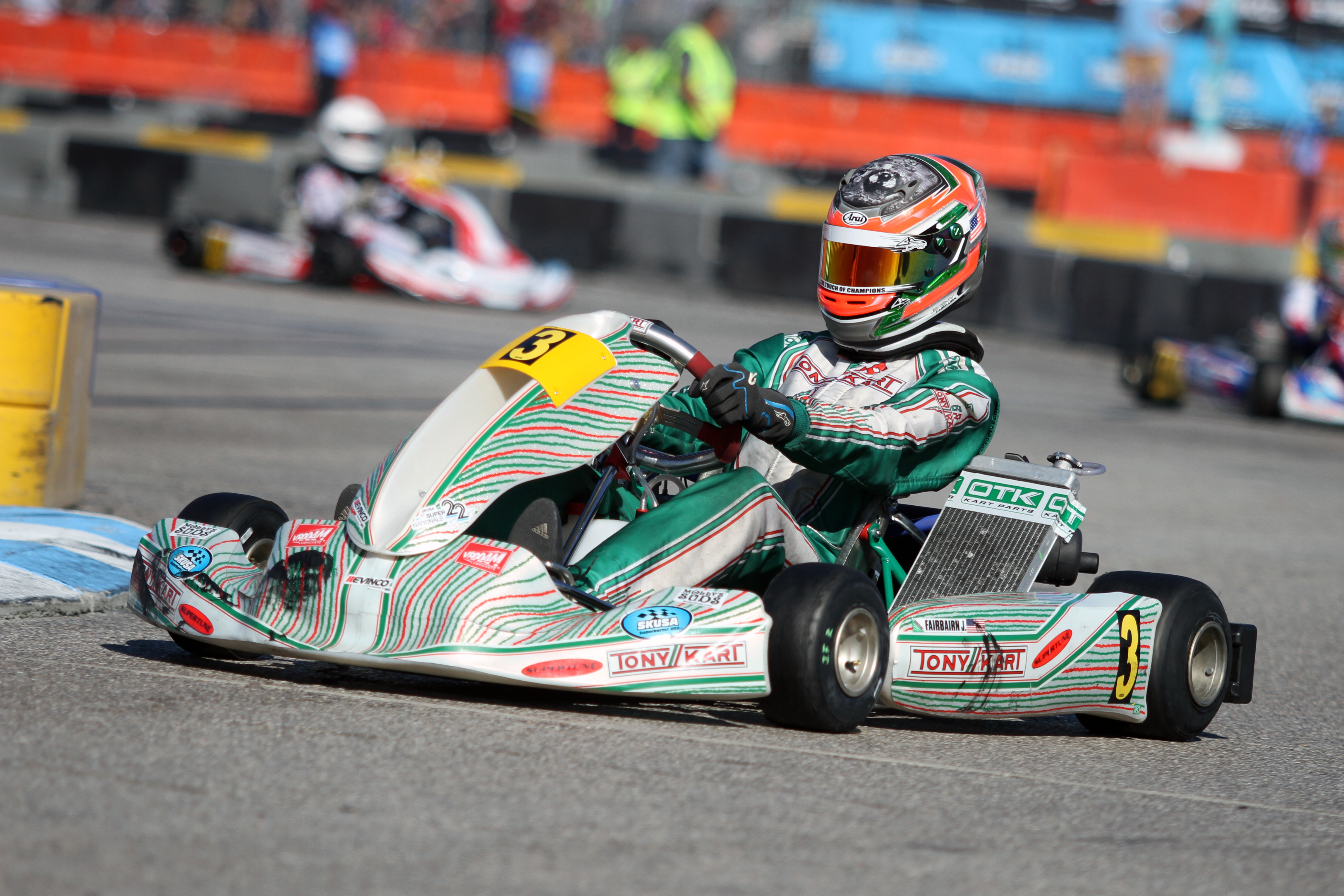 The field in the X30 Junior class at the SKUSA SuperNationals 22 was outstanding. For the first time, we believe, since the class was introduced to the event in 2008, there were two former winners of the class (Jak Crawford, Tyler Gonzalez). Also in the field was the 2018 SKUSA Pro Tour champion (Arias Deukmedjian), the 2018 United States Pro Kart Series champion (Nicholas Terlecki), the SKUSA Winter Series champion (Sebastian Montoya), and the US Open Rotax champion (Thomas Nepveu). Sprinkle in the international stars from around the world and you had a solid top-15 just to begin the week-long adventure outside the Rio All-Suites Hotel & Casino. Add in the rest of the 77-driver field into the mix and you had a great fight to see who would emerge as the 2018 winner of the SuperNationals.

Among those on the radar entering the November 14-18 event was Jeremy Fairbairn. Rob Howden and David Cole both predicted Fairbairn to place on the podium on SuperSunday. Howden put the 14-year-old at the top to win, while Cole placed him second behind SKUSA Winter Series champ Sebastian Montoya in their official predictions. Truly, the 2018 season was one of growth for the Florida driver. Jeremy competed in the FWT and the SKUSA Winter Series, and then gained his first SKUSA Pro Tour podium at the SpringNationals in Phoenix. Fairbairn really stood out not for just his height, but by putting his name on the map during the summer months as well. Fairbairn was the double winner at the USPKS Carolina Grand Prix at GoPro Motorplex and followed that result up in July with two wins at the WKA Manufacturers Cup Series event in Norway, Illinois. He nearly pulled off another double win weekend at the USPKS finale at New Castle at the end of July, but a mechanical issue took him out of the second main event. It was at the SummerNationals where Fairbairn gained the attention of everyone on the national scene. On Sunday, Fairbairn won his Prefinal and was able to edge out the competition to score his first SKUSA Pro Tour victory, which secured him the third spot in the final X30 Junior championship standings.

Running the SKUSA #3 plate for the week in Vegas, Fairbairn began the SuperNationals just missing out on the top-10 in qualifying, sitting 11th overall on Thursday afternoon, which put him on row three of his heat races. Fairbairn was seventh on the opening lap of his first heat race (B vs C), but worked his way forward to the front, scoring the win. The mission throughout these heat races is to avoid a mistake at all costs. Unfortunately, Jeremy was caught up in some close racing, and made contact with the wall and dropped down the order, eventually finishing 25th in A vs C. Fairbairn bounced back on Saturday for his final heat race (C vs D). He would lead in the second half of the race, settling into the third when the checkered flag waved. Those two top-three results helped to offset the poor finish to line him up 12th on the grid for the main event on SuperSunday.

While you would think a row six starting spot puts you in position for the victory, in truth, the worst starting position of a former winner in the Junior category was fourth, done by now Formula One driver George Russell in 2011. That stat would change in a big way as Fairbairn put in a stellar performance on SuperSunday, opening up the 22nd event with the X30 Junior class as the first on the order on the day.

It only took four laps before we knew Fairbairn was fighting for a podium position. The Tony Kart driver jumped up to eighth on the opening circuit, and gained two spots a lap to reach second by lap four. Defending winner Jak Crawford had already jumped out to a two-second advantage. Over the next seven circuits, Fairbairn put down consistent laps, all within two tenths of each other to run down Crawford. Fairbairn grabbed the lead on lap 12, and we thought the fight was on. Crawford was never able to respond, as Fairbairn continued his consistent pace. Fairbairn would lead the final eight circuits to secure his first SKUSA SuperNationals victory.

The win was a cap to Fairbairn’s Junior career, as the 14-year-old is moving up to the Senior category for the 2019 season. He begins that jump this month with club races before making the move on the big stage with the SKUSA Winter Series and the Florida Winter Tour on his calendar for the upcoming season. 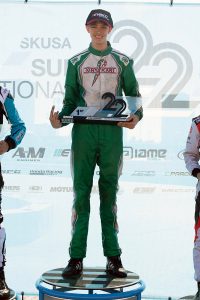 Chassis:  Tony Kart
Engine/Engine Builder: Allison Racing Engines
Sponsors:  GearSource.com / LED Source
Series You Compete In: Superkarts! USA, United States Pro Kart Series, Rok Cup USA
Years Karting: 7.5
How did you get started in karting?  My dad was doing lots of track events, and I would come along – eventually spotting the kart track at PBIR. I convinced my dad to let me try it and the rest is history!
What has been the high point in your racing career?  For sure, winning SuperNationals 22.
What are your goals in racing? To continue improving while I begin to move into cars in 2019 – with the hope of catching the eye of someone big!
In a few words, how would you describe your driving style? Aggressive but fair
Funniest moment at the race track? You might not be able to print this one, but driving from the hotel to track in Indiana, in the car, Santi Trisini meant to say “I have diarrhea” but he said “I have gonorrhea”… my dad corrected him. My other funniest moment was when Mac Clark accidentally ran over the SKUSA sign with his golf cart.

What do you do when not at the track? Hang with friends
What are your goals outside of karting? To make it through high school with decent grades – maybe business like my dad.
What app or game do you play right now? Fortnite
What type of street car would you like to drive? BMW
What are your pet peeves or things that irritate you? Reckless driving on the track, drivers who block always, rude people
What do you think could be done to improve the sport of karting? Make engines more equal so it’s more about the driver. Less series so the grids are bigger (it’s much more fun racing bigger fields).
What are your favorite aspects about the sport of karting? The competitive aspect, the incredible rush it gives me as a driver, that we’re all friends off the track.