Tony Kart: Last Round of the WSK Final Cup Is Over 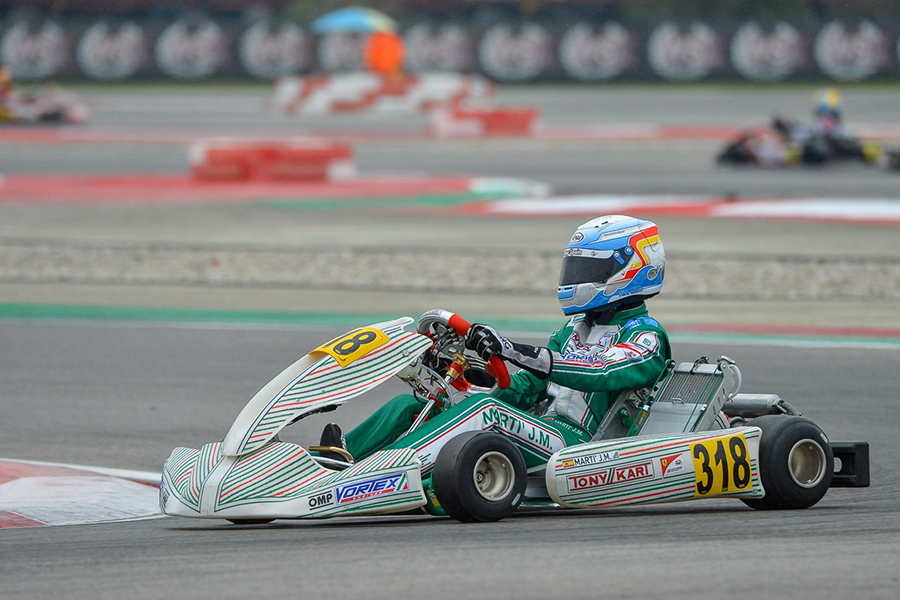 The bad weather in northern Italy during the weekend of November, 22nd-25th did not spare the Adria Karting Raceway, theatre of the last round of the WSK Final Cup. The Venetian track has been actually affected by a heavy rain from the free practices on Friday, putting the Tony Kart Racing Team’s drivers to the test, who showed all their driving qualities to be able to gain the rating’s top positions.

The fastest driver in these difficult conditions was Nikita Bedrin, who was able to center the second time (1’04”976) of the OK Junior category during the qualifying on Friday. Afterwards, the Russian driver obtained two victories and a third position during the eliminatory heats and a second place in Prefinal A.

In the decisive race of the weekend, he started from the fourth position, but after being slowed down by his opponents, Bedrin did not manage to impose his pace and ended his race at the eighth position, behind of his teammate Josep Maria Martì. The Spanish, fourth in Prefinal A, started better in Final, but he then betrayed the difficult conditions of the track, ending the race in seventh position.

The bad weather did not even spare Laurens Van Hoepen, after his excellent performance in Castelletto di Branduzzo, the Dutch driver ended his final on the Venetian circuit in the 11th position.

Here Vidales starts very well and up to the middle of the race, he maintains the fifth position, then, due to a technical problem, he is forced to withdraw. His teammate Noah Milell managed to keep our racing team’s colors high: he had difficulty with the track conditions at the beginning of the weekend, but he then grew up, improving his performances and ending the Prefinal A in the third position, and centering the eighth position in Final.

Rashid Al Dhaheri was unlucky too: the driver from UAE did very well during the eliminatory heats of the Mini 60 category, where he gained a victory, a second and two third positions, leading him to his success in Prefinal A. The difficult conditions of the Adria Karting Raceway, however, betray him in Final: his advance burst at the starting line, actually, will be sanctioned with ten seconds penalty forcing him to the ninth position, which does not reflect his undertaking on the track during the whole weekend. Good results also for his teammates Jimmy Helias, Jules Caranta and Yuanpu Cui, who gained a third position in the eliminatory heats as best result.