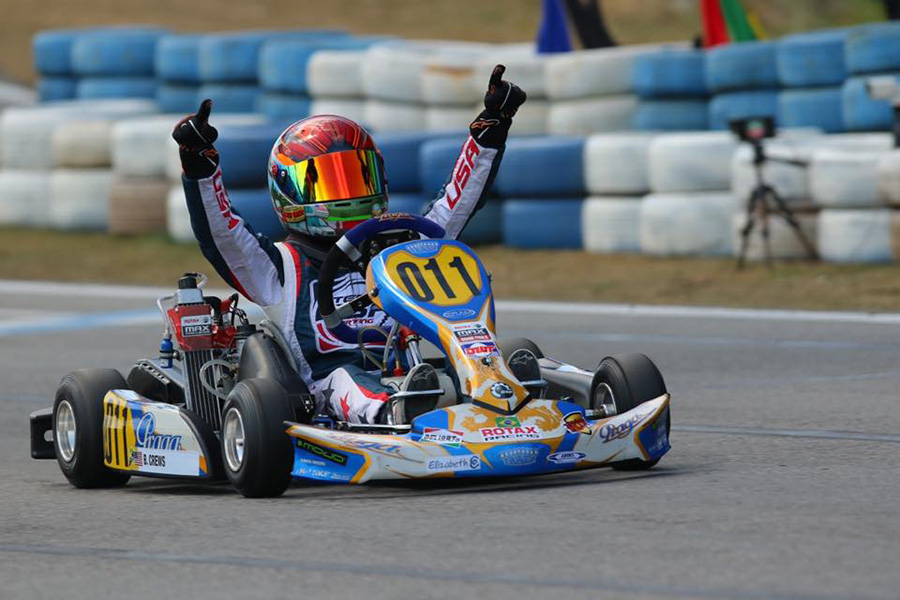 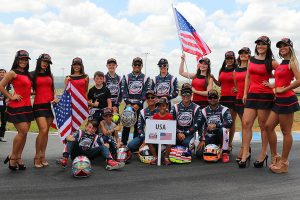 The final day of the 2018 Rotax Max Challenge Grand Finals was held on Saturday at the International Circuit Paladino in Brazil. For the first time in the 19-year history of the event, six Rotax champions would be crowned on the soil of Brazil, who hosted the event for the first time. Warm weather greeted the six categories of 36 drivers each competing for world Rotax titles. Thousands around the world, including the 55 countries represented at the event, were tuned in on the phones and laptops watching the action from home, work or in the car to see where their drivers ended up.

For Team USA, it was a solid day to complete the week, featuring four top-10 finishes, including two podiums and one victory. The win is the third for Team USA, with the first coming in 2013 in New Orleans when Juan Manuel Correa stood at the top of the podium in the Junior category. After the awards were handed out, and Brazil was named the Nations Cup winner, attendees celebrated the week at the ‘Drivers Party’. There it was announced the event would return to Sarno, Italy – site of the 2016 event – on October 19-26, 2019. It now gives J3 Competition and RTX Karting – the USA distributors of Rotax products – the goal to prepare Team USA for more success at the Rotax Max Challenge Grand Finals. 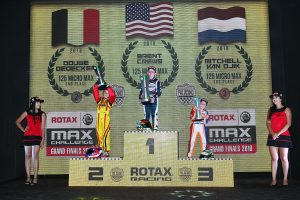 Crews on top of the podium in Micro Max (Photo: Rotax-Kart.com)

It seemed that Crews was only getting better and better with each day. A solid Prefinal locked the lone USA driver into the outside of Row Two for the main event. A wild start saw the two-time IAME International Final victor and SKUSA SuperNationals winner get shuffled back to seventh on the opening lap. He made quick work to get his lost positions back and broke away in the third spot. Crews ran down the top two with fast laps and was into the lead by the halfway point. Leading the way, German driver Douwe Dedecker kept in his slipstream with Dutch driver Mitchell Van Dijk trailing. Dedecker slipped past Crews coming up the hill toward the main grandstands on Lap 10. Crews came right back in turn six to lead with the last lap board displaying. Crews went on the defensive on the final circuit, and fighting for the runner-up position behind him gave him enough breathing room to reach the checkered flag first. Crews became the second Team USA driver in the Micro division, matching the win by inaugural winner Diego LaRoque in 2016 at Sarno, Italy. 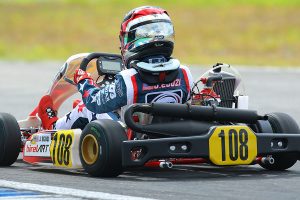 Things continued from good to worse as the week progressed for Egozi. The Florida Winter Tour and ROK the Rio champion was shuffled to the back of the field on the opening circuit and retired just two laps later. It was a tough outing for Egozi, who is sure to be among those favored to return to the RMCGF in 2019. 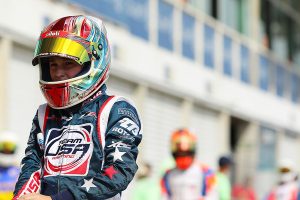 As he has shown through the season in the USA, Mars is among the top Junior drivers in the sport today. After a planned scrub of the tires session in warm-up, Mars went to work in the Final. A great start put him right into the top-10 on the opening circuit, and he paced himself forward, reaching fifth place by lap 12. He slipped back one the next lap and fought strong to hold onto the sixth position at the checkered flag. It was an improvement of seven positions, and matched the finish by Team USA driver Jak Crawford last year. 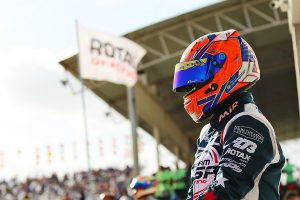 Another top-10 was on the horizon with two strong drivers starting in the upper half of the Senior grid. Greenemeier climbed as high as 12th until she was shuffled to the back on lap nine. Ramirez was on the brink of breaking into the top-15, only to have his own issues with two laps remaining. Ramirez crossed the line in 21st, receiving a 5-second penalty for the pushback bumper. 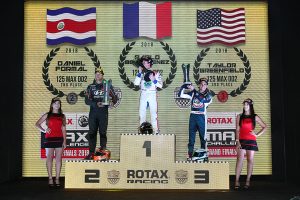 Greenfield on the podium in DD2 (Photo: Rotax-Kart.com)

All week long, Greenfield had shown the pace to be among the contenders in the DD2 category. Starting third seemed to be a solid position to start, however, Greenfield was overtaken and dropped back to sixth. He fought his way to fourth, thanks to two of the leaders getting together on lap two. One of them continued – polesitter Xen De Ruwe – with five-time USA champion Danny Formal at the point driver under the Costa Rica flag. Formal led with Greenfield fighting to be in the top-three in a four-driver lead group. De Ruwe however suffered rear bumper damage that eventually forced a meatball flag and his removal of the track with seven laps to go. This made the lead group now three with Flying Frenchmen Paolo Besancenez. The French driver stayed on the bumper of Formal. Working around Formal on lap 18, Besancenez took the victory while Formal settled for the runner-up spot. Greenfield held off a late charge by South African Arnold Neveling, to earn the third spot. Greenfield became the fourth driver in RMCGF history to podium from Team USA, and a great improvement after having zero drivers in the Final for the past two years in the category. 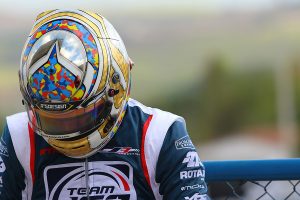 The week in Brazil was a positive on for Derek Wang, making his sixth straight appearance at the RMCGF in DD2 Masters. 2014 was the only year Wang did not qualify for the main event, and has been the top finisher for Team USA for now five straight years. As the lone USA driver in the Final, Wang was among a battle from sixth back for the majority of the race. It was a fight to stay inside the top-10, with the two-time SKUSA Pro Tour champion able to finish in the ninth spot, two spots off his best finish at the RMCGF from last year.