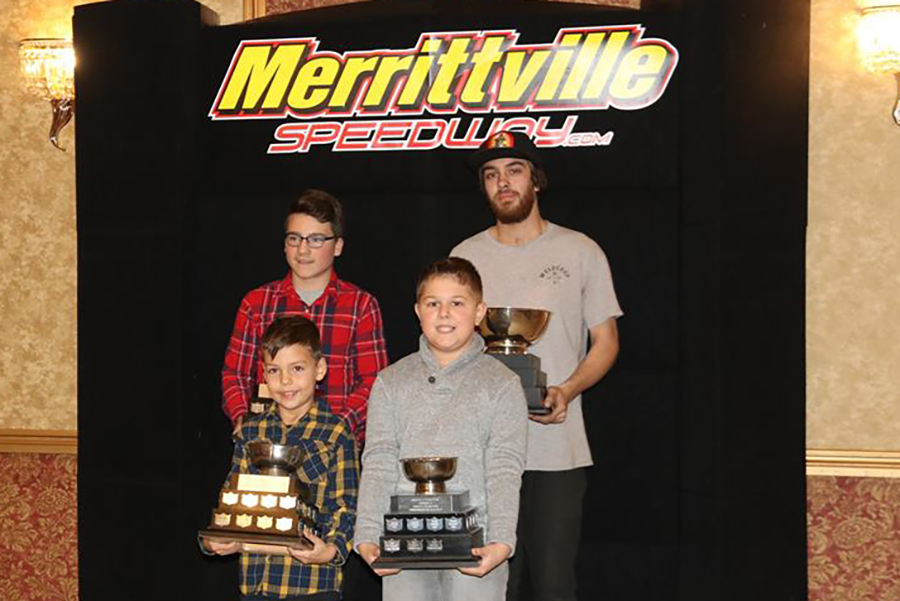 “Before we established our kart program and since … so many of our Saturday Night racers got their starts in Kart Racing,” said Jim Irvine who was the Thorold track’s General Manager when Tuesday Night racing debuted in 1993 in opening remarks, “to see how our young racers have grown up in the sport is quite incredible.”

One year ago, Nigel Pendykoski of Niagara Falls celebrated his first Junior 1 Title. In 2018 the 12 year old won the Junior 2 Division as a rookie leading to the Crew Chief of the Year Award for his dad Mike.

“This is quite an honour for me,” said Pendykoski after receiving the Crew Chief Award, adding, “but I have to share it with my dad. Anyone who knows me knows I couldn’t have won this award without all the hard work and countless hours he puts in to get Nigel’s kart race ready.“

Also taking a step back from his karting involvement is former Tuesday Night Racer Chris Watson who was presented the Race Director’s Award from Joey Mastroianni.

Watson, who moved from Karting to Saturday Nights where he still races in the Vansickle Pet Valu & Groomingdale’s Modified Lite Division returned to his racing roots in recent years to serve as an official – the last two seasons as Starter.

All of Merrittville Speedway’s 2018 Drivers in attendance were eligible to win an Invertor Generator donated by Briggs & Stratton and the winner of the $ 800 prize was Junior 2 racer Madelyn Goulding.

A number of Specialty Awards were handed out and the winners are listed as follows.

Father and son – Dave and Noah Mamo were presented Dedication to Racing Awards for all their efforts in both Tuesday and Saturday Night Racing..