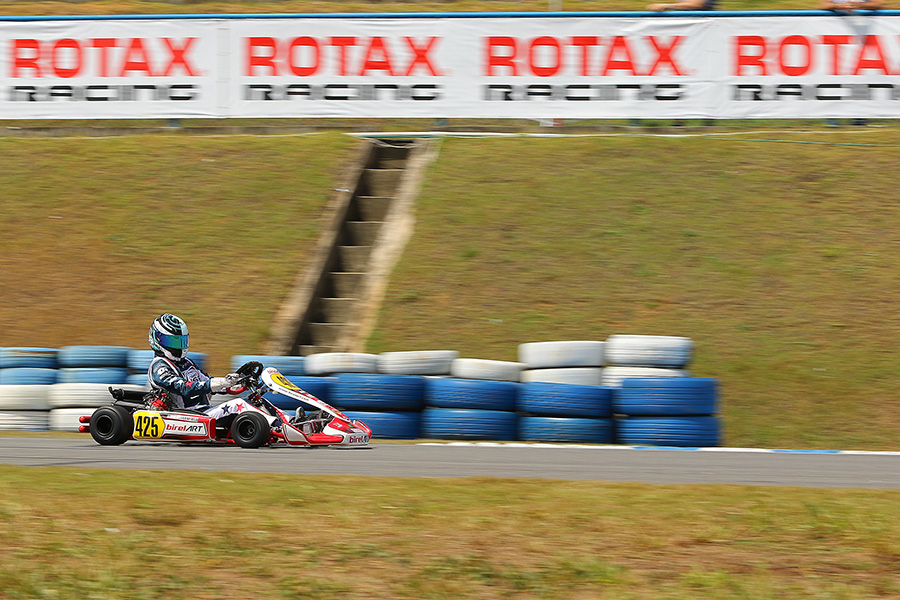 It was another picture perfect day at the International Circuit Paladino as the 2018 Rotax Max Challenge Grand Finals continued. The 360 drivers from 55 countries fought through the final rounds of heat races to set the grids for Friday’s Prefinal races. Thursday is a key day at the ‘Olympics of Karting’. In year’s past, racers fought to stay out of the dreaded Last Chance Qualifier. Now following the CIK format, the fields will be put into Prefinal races, with those points combined with their heat race results to form the 34-kart grid main events on Saturday. About half of the 10-driver Team USA squad has Saturday all but locked up, while others will fight Friday for every position possible in hopes of earning one of those coveted spots.

The recent SuperNationals winner Crews continued his way fighting forward in the second and final heat for the Micro Max field. Crews ran as high as 10th before getting shuffled back to 14th, crossing the line in 13th before gaining a spot after penalties. Crews will start Friday’s Prefinal from the inside of Row 5.

It was another hard-fought day for Egozi, who showed the speed to contend once again with a near top-10 lap in practice. Egozi changed his position nearly every lap in the second and final heat race in the Mini Max division., eventually crossing the line in 18th for his best result of the two heats. He will need to gain some solid positions in Friday’s Prefinal, starting outside Row 11, if he wants to contend for a podium spot on Saturday.

Mars is showing the pace and has the results to contend heading into the Prefinal round. Mars’ second heat was static, however, he did lay down one of the fastest laps of the race. He used that same speed in the second race on the day to advance his way up to the sixth spot in 10 laps, moving up one more after penalties for his best result of the three heat races. Those results put him into the top-15 heading into the Prefinals. White has not been able to get himself out of the bottom half of the heat races. Issues in his final heat has all but put him out of qualifying for the main event. A solid run in the Prefinal on Friday will still be a great way to end his first international trip.

The opening heat race of the day looked to be the best effort for Greenemeier as the Senior rookie nipped inside the top-five. She would get shuffled back, but still remained inside the top-10. She fought her way back into the top-10 in the final heat race, ending the three rounds with three top-10 results. Ramirez saw his hopes dashed away in both his heat races. The first stint, getting up to 11th, was dropped back late in the going and in the last heat, running up to as high as 13th before dropping to the tail of the field. Both currently sit inside the top-34, where they need to be to qualify for the main event on Saturday.

The highlight thus far for Team USA has been the performance of Greenfield. He has not left the top-five all event, and gave the squad its only heat race win of the event. Greenfield. He grabbed the lead in the first heat of the day, driving away with solid lap times to grab the checkered unchallenged. He was shuffled back to fourth in his final heat race. Retaking third, Greenfield posted fast laps of the race at the end trying to run down second place and race winner Daniel Formal. Both Formal and Greenfield will run Prefinal B, starting on the front row. Hopefully the two work together to pull away from the field to retain front of field starting positions for the Final on Saturday.

It should have been three top-10 finishes for Wang in his three heat races. The first one of Thursday was another improvement, up to seventh, while a red flag restart cost him spots in the final heat race. Hopefully Wang can improve his position from the Prefinal to break into the top-10 starting spot for Saturday. Bonanno saw his chances of making the main event on Saturday go away with a DNF in his first heat of today. A burnt wire ended his race early, and set-up changes in the final heat cost him positions once again. Schiavo has not been on pace all week, and contact in his first race of the day has all but taken him out of the main event on Saturday. However, there is still a chance depending on how the Prefinals unfold. Just 11 points are keeping Bonanno out with Schiavo trailing the 34th position by only 4 points.