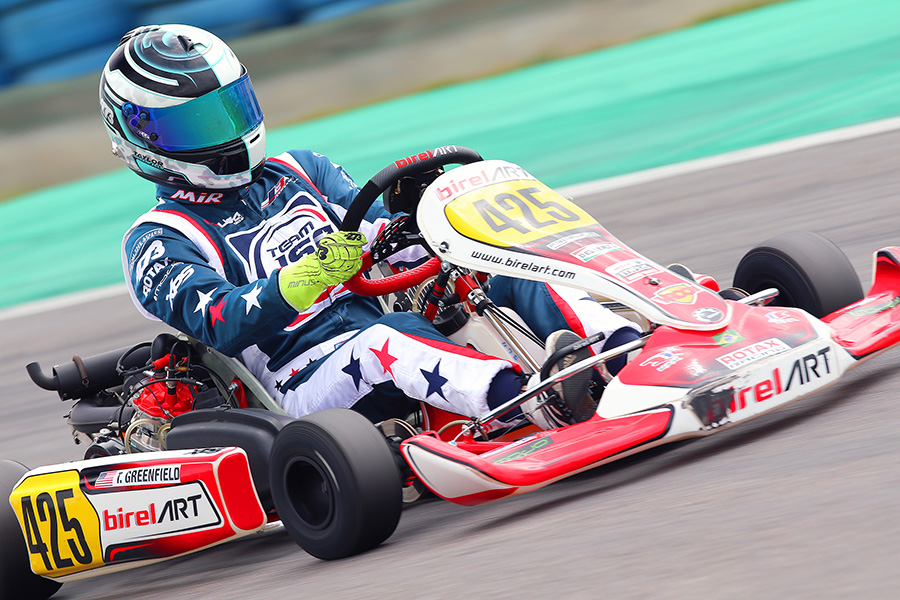 Friday is decision day at the 2018 Rotax Max Challenge Grand Finals. For the 360 drivers from 55 countries, Friday’s action was their last as the six categories were condensed to just 36 for the main events set for Saturday around the International Circuit Paladino in Brazil. Aside from the warm-up, all that drivers contested were the Prefinal races. For those with 72 drivers, two Prefinals per class were ran and points given to each driver for their finishing position. Combined with the heat points, the total set the order and the top-36 were transferred over to the Finals on Saturday. Of the 10 Team USA drivers competing at the ‘Olympics of Karting’, seven will race for a chance to stand on the podium or claim the Rotax world title.

Crews did exactly what he had to do in the Prefinal to position himself to battle for the podium on Saturday. Starting ninth, Crews knifed his way up into the fourth spot through the opening lap. Three leaders broke away and Crews ran similar lap times by himself, unable to run them down. He was caught by the quickest driver on the track, but held him off at the line to secure the outside Row 2 starting spot for the main event.

Starting outside the top-20 makes for a challenging attempt to move forward. That has been the issue with Egozi all week. Missing out on the setup for qualifying, Egozi continues to show the speed to move up into the top-15. Staying around where he started in Prefinal, he was pushed outside the top-25 on lap four. The Florida Winter Tour and ROK the RIO champion fought back to 24th. James did get on the big screen when the RMCGF broadcast featured an interview with him and Jen Wade.

White saved his best performance of the week for the Prefinal. Moving up 11 positions, it is not enough for the F Series champion to compete in the Final at his first RMCGF in the Junior category. Mars had a tough Prefinal, thankfully, was able to managed an 11th place run after getting shuffled back to 17th. Gaining one spot because of a penalty ahead of him, Mars starts the main event from inside Row 7.

It was a wild Prefinal for both Team USA members. Greenemeier entered the race essentially into the main event, minus any mishaps in the Prefinal that would drop her out of the top-36. Ramirez was on the positive side of the border, and a strong finish would not only keep him in the Final, but improve his starting position. Both got through the opening corners clean, but Greenemeier began floating backward. She had dropped down to 14th, with Ramirez moving ahead of her. It wasn’t until Lap 11 when action in front of them helped move them up into the top-10 where they would finish. Greenemeier continued her streak of finishing inside the top-10 in all four races, and Ramirez’s Prefinal helped to move him up into the top-25 going into the Final.

The hope of a victory for Team USA remains on the shoulders of Greenfield. Starting on the front row of his Prefinal, Greenfield kept himself in contention, never making any big mistakes and finished where he started. Five-time USA champion Danny Formal, racing for Costa Rica, led wire-to-wire in the same race, with both drivers having a great chance at the podium on Saturday. Formal will go from outside the front row, while Greenfield is on the inside of Row 2.

Only one of the three drivers from Team USA will be on the starting grid Saturday. Luis Schiavo was the first up on the Prefinals, and saw his hopes of making the Final dashed on the opening lap. Contact put him at the tail of the field, and eventually out of the race to end what was a difficult week for Schiavo in Brazil. The second Prefinal featured two USA drivers. Like Schiavo, Bonanno was out on the first lap, ending his first RMCGF after 10 years of trying to qualify. Wang started sixth, dropping to eighth and fell even further after some contact. He remained inside the top-12 and jumped to eighth on the final circuit.