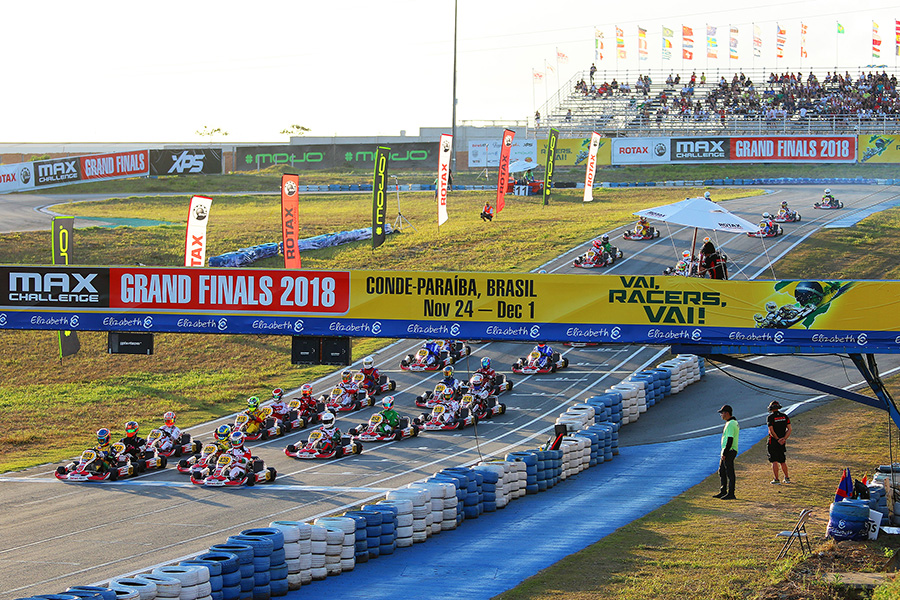 Business picked up on the International Circuit Paladino for the 2018 edition of the Rotax Max Challenge Grand Finals. Today marked the start of official sessions on the 1.28km circuit in Conde-Paraiba, Brazil with qualifying for the 360 drivers representing the 55 countries competing, setting up grids for the first round of heat races contested in the afternoon. Thankfully, rain stayed away from the area for the first time since karts hit the track for the ‘Olympic of Karting’ on Monday. It was also a strong day for the 10 drivers in Team USA, with nearly all in contention with multiple top-10 results in qualifying and the heat races.

Crews, battling an illness on Tuesday, bounced back on Wednesday to begin the day among the top drivers in the final practice session. Qualifying did not pan out as he hoped, both during and after. Crews was inside the bottom-half of the top-10 after the session completed, however, officials caught him crossing the blend line while leaving the pit lane to begin the session. He was not alone in receiving the penalty with a total of eight drivers hit with losing their three fastest laps of the session. It dropped Crews to 17th. In the opening heat race, he dropped out of the top-20 at start but managed to knife his way up to 10th at the line as the second-quickest driver of the race.

It was not a strong day in the Mini Max class for Egozi, who was unable to break back into the top-20 all day. After setting the 20th fastest lap, Egozi fell backwards and ended up crossing the line in 28th, gaining one spot after penalties.

Luca Mars led the way for Team USA. The qualifying session was nearly perfect, setting the purple time in sectors one and three, placing third in his group. Unfortunately, the second group was much quicker, dropping him outside the top-20 overall. Mars moved up four spots in his opening heat, starting the wheel-to-wheel action with a positive start. White was in the fast group, only three tenths off Mars time. Classified outside the top-34, White has work to do on Thursday and Friday to find a way into the top-34 for Saturday.

Both Greenemeier and Ramirez benefitted from hard racing early in their first heat. Placed in the same group after qualifying, Greenemeier ran as high as fifth before getting shuffled back in the final lap. Ramirez took advantage, jumping ahead as the two drivers finished inside the top-10. Greenemeier got some screen time, interviewed by Jen Wade on the Rotax Livestream after her heat race as one of the top finishing female drivers in the category.

A great new addition to Team USA, Greenfield is performing for a podium spot. Toward the top of the order throughout practice, Greenfield was 19 thousandths from grabbing the top spot in his qualifying group, ending up fourth overall. That puts him on the outside of the front row for each heat race. In the opening heat, Greenfield was in a heated battle for second early. Jonathan Buxeda (NZD) got inside of Greenfield on lap two, slid wide and Taylor made contact with his left rear under braking and entry. The contact dropped him back to 11th. As he shown in practice, Greenfield ran purple laps in a charge forward, ending up P5 at the line. The previous race, US Open winner and five-time US champion Danny Formal scored a dominating heat win, putting himself in the hunt for the top of the podium on Saturday.

It was a solid day for racing in the DD2 Masters class for Team USA. Wang set the best lap for the squad in qualifying, and grabbed the best result in the heat races by advancing forward to the top-five. Bonanno, in his first DD2 start ever, and veteran Schiavo moved forward in their heat race. Six spots for Bonanno with a much needed 12 positions for Schiavo as he will need to grab many positions to situate himself in a better spot for the Prefinal.