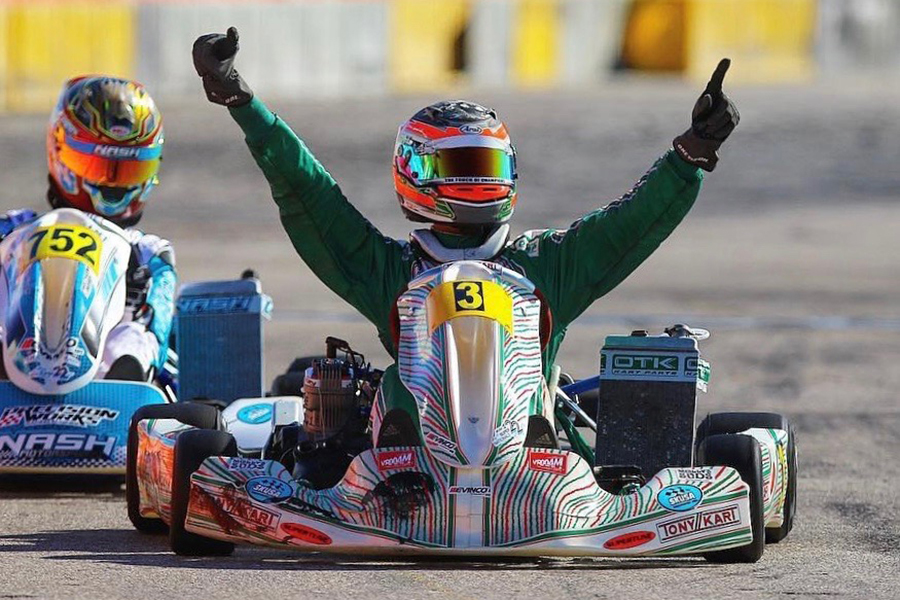 Supertune and Jeremy Fairbairn scored the victory at the biggest karting weekend of the year
(Photo: CKN)

It was a season-ending win in their debut Superkarts! USA (SKUSA) SuperNationals as a karting operation, but Team Supertune and X30 Junior driver Jeremy Fairbairn scored the victory at the biggest karting weekend of the year. Taking on the temporary circuit at the RIO All-Suites Hotel and Casino in Las Vegas, Nevada, the Supertune program rose to the occasion and put their Tony Kart product at the front of the field in a pair of different classes.

“I just want to give a huge thank you all the people involved in getting this new venture off the ground,” explained Ben Cruttenden, Owner of Supertune. “If you had told me six months ago that we would win the SuperNationals in Junior, and start on the pole position in Mini Swift, I would have never believed you. It’s been a big team effort and I could not have done it without everyone’s help.”

In X30 Junior, one minor incident set Fairbairn back in the heat races and because of that, he lined up eleventh for the start of the main event. On a mission in the final since the drop of the green flag, the Floridian driver rocketed his way to the front of the field and chased down the leader who had stretched out to a two-second gap. Stalking him for a few circuits, Fairbairn made his move, and never looked back, improving on his third place podium result from one year ago.

Cruttenden continued, “I knew that Jeremy had the pace, it was just a matter of getting through the first few laps and getting clear of traffic. Jeremy was quick on new tires, so we were confident that would assist his efforts in the final. Congratulations Jeremy on a great run and your new title of SuperNationals Champion!”

In the IAME Mini Swift division, it was another Supertune driver that was at the front of the field as Kai Sorensen progressed through the heat races in fine form to claim Super Sunday’s pole position. Jumping out to the lead early and leading the first twelve laps of the main event, Sorensen was engulfed in a seven kart battle for the win on the final lap and wound up providing Supertune with another top-five result coming home in fifth.

Enzo Deligny added Supertune’s third top-fifteen result on the weekend after moving forward from his 18th place main event starting position to take the checkers 15th in Mini Swift. Falling behind early in the weekend due to an on-track incident that forced him to be in group one for qualifying, Deligny fought back to transfer directly to the main event and showed the speed of his Tony Kart.

“Both Kai and Enzo had great pace on the new Tony Kart chassis,” added Cruttenden. “Sometimes you need to be fast and lucky, not just fast, but I think we have the start of a great program and I am excited about the future and these two young drivers.”

Next up for Supertune will be the first round of the 2019 World Karting Association Manufacturers Cup December 28-30th. Taking place in the infield of the famed Daytona International Speedway in Daytona Beach, Florida, Supertune is offering both tent and transport as well as arrive and drive opportunities for the traditional event.

For more information on Supertune, race team opportunities in 2019, OTK product sales, or engine and dyno services, please contact Ben Cruttenden at 317.900.3141 or via email to Ben@Supertune.us. Supertune can also be contacted through their social media accounts at Supertune USA.