Situation Saturday defines those racing for victory at 22nd event 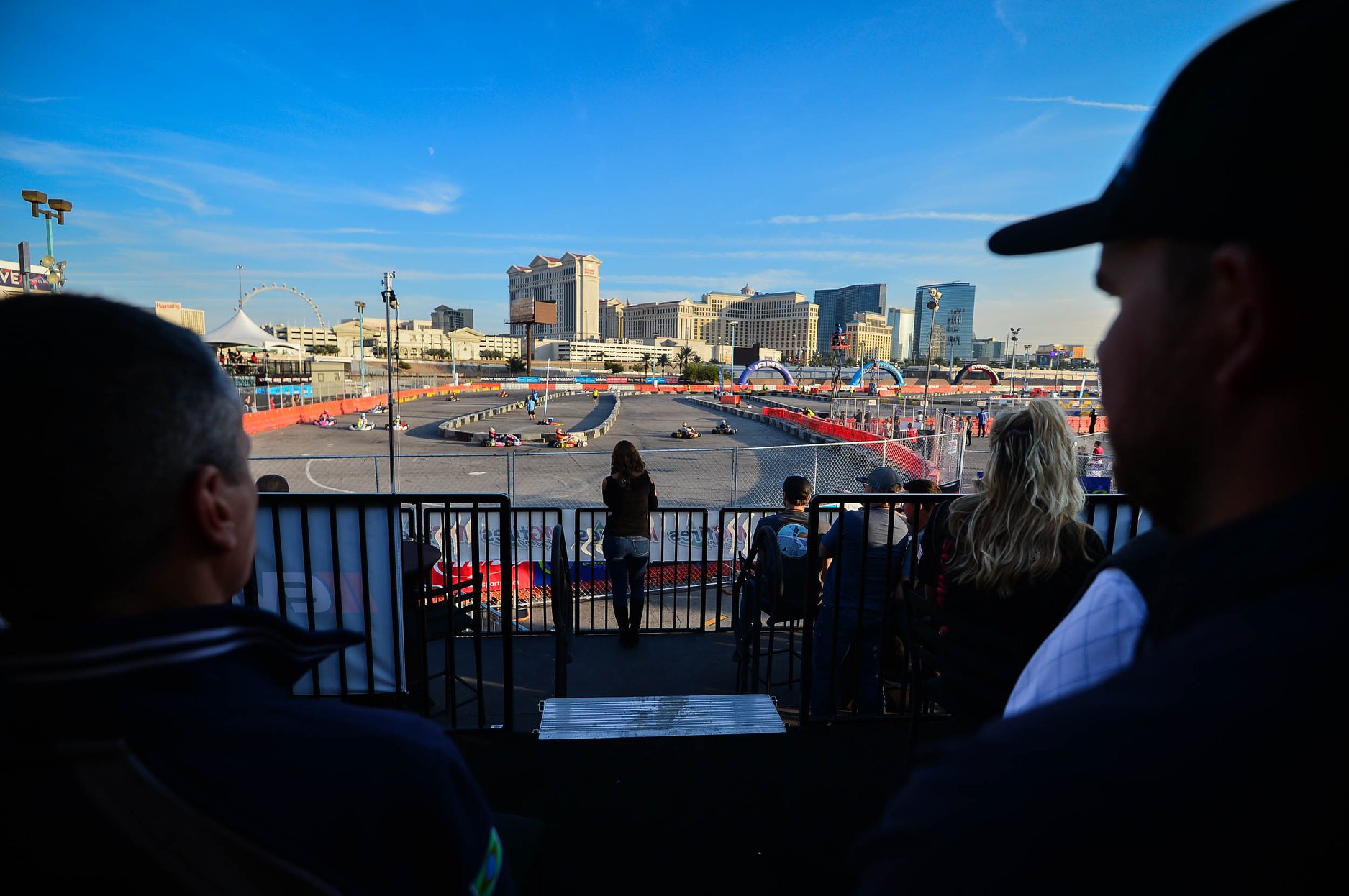 The day that defines who will be racing for the victories at the SKUSA SuperNationals 22 at the Rio All-Suites Hotel & Casino. The final round of heat races along with the Last Chance Qualifiers helped to decide those racing on SuperSunday in the 10 categories.

Defending race winner Billy Musgrave (Aluminos) confirmed his bid to repeat with the win in Heat #3 to secure the pole position for SuperSunday. Musgrave grabbed the holeshot and had a long line of drivers behind him for much of the race. Frenchman Jeremy Iglesias (Formula K) became the lead challenger, securing the top spot from Musgrave for three laps. Musgrave retook the lead as they received the white flag, holding on to the checkered flag for his second heat win of the event. Iglesias settled for second, holding off SKUSA Pro Tour champion AJ Myers (Mad Croc). With qualifying breaking the tie, Musgrave retains the pole position for SuperSunday with Myers on the outside of row one.

Eight drivers finished within two seconds at the checkered flag, showing how close this fight for the inaugural win in KA100 Senior will be. The third heat was a battle, and top qualifier Colton Ramsey (Exprit) emerged as the winner. Ramsey bounced around in the top-three, securing the lead on the white flag, holding on to score the win ahead of Aussie Oscar Priest (Kosmic) with Heat #2 winner Dakota Pesek (Top Kart) in third. Heat #1 winner Josh Hotz (Merlin) led at one point but ended up fifth behind Steve Barros (Tony Kart). Pesek earns the pole position in his first SuperNationals SuperSunday with Hotz lined up on the outside of him.

Jak Crawford became the only driver to win two heat races in the X30 Junior division, winning the AvsB heat. Crawford (Kosmic) was able to get away late after getting pressured by John Burke (Tony Kart). The fight for second ended up with Kas Haverkort (CRG) earning the spot over Burke with Luca Mars (Tony Kart) posting fast lap of the race in fourth. Heat CvsD was a busy fight for the victory, including a number of karts. Sebastian Montoya (Tony Kart) was able to get away late, scoring his first win of the week. Diego Contecha (Parolin) was the one crossing the line in second with heat winner Jeremy Fairbairn (Tony Kart) in third. 2016 winner Tyler Gonzalez (Kosmic) had an issue in the fight for the win, jumping the turn 12 curb and coming down hard. Staying on all four wheels, he limped back to the pits and was transported by ambulance complaining of neck and back pain. After the points were calculated, Crawford holds the least amount of points with his two wins, while Mars is set to start on his outside.

The Mini Swift got through Friday with clean, solid starts. On Situation Saturday, it was a little more hectic. In Heat AvsB, there was a pile-up in turn two, however, everyone was able to continue. Kai Sorensen (Tony Kart) was able to capitalize on a three driver breakaway, scoring his first heat win and earning the pole position for SuperSunday. Nikita Johnson (Energy) ended up second with pole sitter Carson Morgan (Kart Republic) dropping back early, working his way up back to third. The start in CvsD was sloppy as well, with some of the top starters involved in contact in turn one. This allowed Freddie Slater (Benik) to break away from the field for his lone heat win. It was a 3.3-second advantage as they battled for second behind him, with Diego LaRoque (Nitro Kart) earning the spot over Micro Swift winner Vinicius Tessaro (Kart Mini). The heat race win gives Sorensen the pole position over Morgan.

The final heat for KZ was nearly as scripted with top qualifier Marjin Kremers (Birel ART) scoring the win. Kremers held off three-time winner Paolo De Conto (CRG) after leading all 12 laps. The fight for third went down to the wire as Maximilian Paul (DR Kart) matched his best heat result from Heat #1. Kremers will retain the pole position for the main event with Heat #1 winner Noah Milell (Tony Kart) on the front row. De Conto with the DNF in Heat #1 starts back in 14th.

The opening groups of the third round of heat races were amazing once again. The 12 laps for AvsB kept us on our toes throughout each corner, with the Lupien brothers securing the top two positions. Top qualifier Cedrik (Kosmic) came away with the win ahead of Samuel (Kosmic) as three-time Rotax Grand Finals winner Ben Cooper made it 1-2-3 for Rolison Performance Group. Jacob Gulick continued the reign at the front for RPG, jumping up four spots with an impressive performance to beat 2018 world karting champion Lorenzo Travisanutto (Kart Republic) for the win in CvsD. Gulick was the quickest kart on the track and took it to the Italian on the final lap to secure P1 while defending winner Joshua Car (Exprit) took third. Cedrik Lupien retained the top spot for the main event with Travisanutto one spot over from last year’s position in his redemption attempt.

A red flag at the start of the Master Shifter final heat race after a stalled kart on the grid collected a number of drivers. Once restarted, top qualifier Rob Logan (CRG) grabbed the holeshot and led early on. Contact with Jason Faint (Sodi Kart) dropped him down the order, with Jordon Musser (Birel ART) taking advantage. Musser drove away to the victory with Ryan Kinnear (Ricciardo) winning the fight for second over Faint with Logan ending up fourth. Logan retained the pole position for the main event with Musser set to start alongside him.

Kip Foster has led from start to finish on the week in X30 Master, scoring his third heat race win. Foster (KF Kart) led all 12 laps for his third win and the pole position for the main event in his attempt at victory number three at the SuperNationals. Last year’s winner Kris Walton (CompKart) was second with Matt Johnson (FA Kart) in third. Fellow Aussie Jason Burns (Kosmic) is showing pace to challenge, grabbing his first win of the event in CvsD. Luis Schiavo (Exprit) was 2.2 seconds back with Derek Wang (FA Kart) earning his best result of the week in third.

James Wharton (FA Kart) is becoming the favorite in the KA100 Junior division. After qualifying ninth, the Aussie drove his way up to his second victory of the event to claim the pole position for SuperSunday. Dylan Christie (Kosmic) ran second to claim the outside row one starting position and Kyffin Simpson (Tony Kart) was third in the race, starting sixth.

The last time Max Garcia (Kart Republic) was at a Superkarts! USA race, he won his first Pro Tour event at the SummerNationals to claim the SKUSA Pro Tour championship. The #1 plate holder for 2019 drove to a second win on the week in heat three, holding off Ben Maier (Nitro Kart) and Ethan Ayars (Parolin). Garcia starts P1 in main event and Ayars goes from the outside of row one.