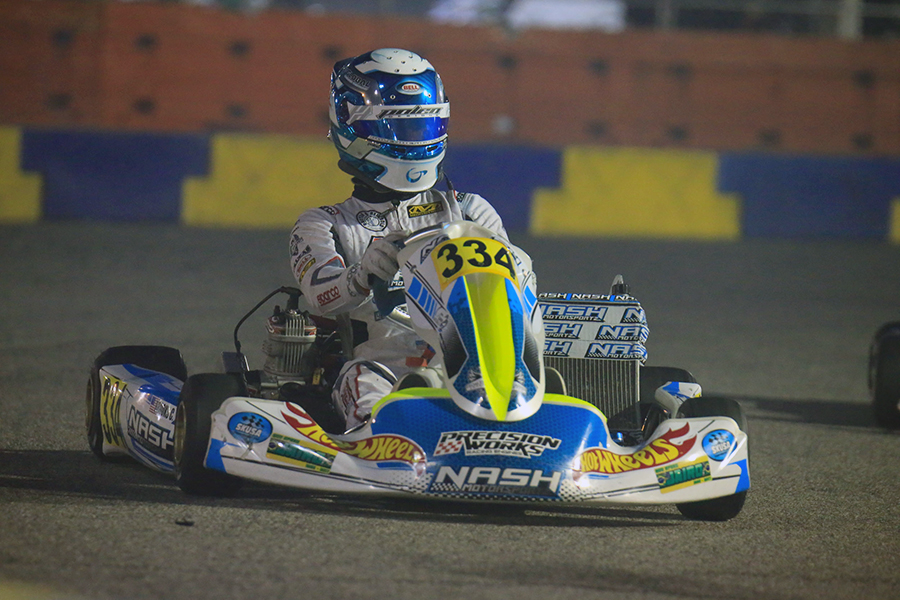 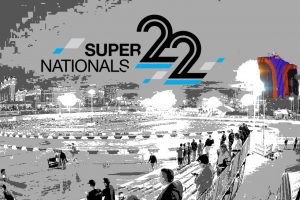 The excitement and energy from the paddock spilled out onto the racetrack on Friday, as the Superkarts! USA SuperNationals 22 went wheel-to-wheel racing for the first time. After two days of practice and qualifying for every driver, Friday’s schedule featured a pair of heat races to see how the track would race and how each driver would continue their runs to SuperSunday. For the most part, the racing was clean, although there was more frantic driving deeper in the fields. The first two heat races of the three that will be run set the stage, giving everyone a really good look at who will likely be challenging for wins at this year’s event. SKUSA’s staff worked tirelessly through an extended day, which was lengthened to deep in the evening due to a few red flags for incidents and broken water barriers, which flooded the track more than once. 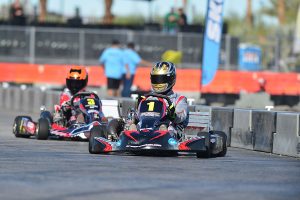 Pro Shifter pole sitter Billy Musgrave grabbed the first heat win while 2018 SKUSA Pro Tour champion AJ Myers secured the second. Musgrave went wire-to-wire after grabbing two holeshots. The first was cancelled after Christian Bird (CRG) had a slow flip on the opening lap that blocked the track. The defending winner Musgrave (Aluminos) went on to lead all 12 laps of the restart with Myers (Mad Croc) and Frenchman Jeremy Igesias (Formula K) on his bumper. Musgrave pulled the holeshot to begin Heat #2, however, Myers controlled the race. He pulled out to a 1.125-second advantage with Musgrave dropping back to fifth. Last year’s provisional S2 winner Jason Pettit (Aluminos) ran second after Iglesias retired on lap two with a mechanical. SKUSA #2 plate-holder Kyle Wick (CRG) was third ahead of Kiwi Matt Hamilton (Aluminos).

The inaugural wheel-to-wheel action for the KA100 Senior category saw some amazing racing at the front. The first start was wild with multiple retirements all over the course. A large lead pack early in the first heat broke down to just three in the end with Josh Hotz (Merlin) throwing it down in the fast turn 12 inside of Dakota Pesek (Top Kart) for the win. Aussie’s took two spots in the top-five with Oscar Priest (FA Kart) in third and Scott Foster (KF Kart) in fifth while Austin Osborne (Kosmic) broke them up. Pesek struck back in Heat #2 to edge out Hotz for the win. Top qualifier Colton Ramsey (Exprit) fell back in the opening heat, leading much of the second and placed third ahead of Foster and Nick Ramirez (Fullerton), up 13 spots to fifth. 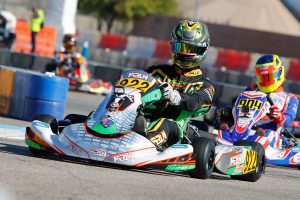 Four different drivers won the four X30 Junior heat races – including two former SuperNationals winners and two USPKS winners from 2018. Tyler Gonzalez (Kosmic) struck first, scoring the AvsD heat win ahead of Italian Gabriele Mini (Parolin) and last year’s victor Jak Crawford (FA Kart). Jeremy Fairbairn, the SKUSA #3-plate holder came away with the win in the BvsC grouping, holding off last year’s Mini winner Connor Zilisch (Tony Kart) and Luca Mars (Tony Kart). Crawford won the battle in the AvsC group with Thomas Nepveu (Birel ART) bouncing back from a lap 1 DNF in his first heat race to end up second. Zilisch was moved up to third after Kas Haverkort (CRG) was penalized for blocking. Mars was the fourth different winner as he held on to the checkered flag after a great battle with John Burke (Tony Kart) with Gonzalez recording the third spot.

Of the morning groups, there were no better starts then in the four heat races for the Mini Swift class. All four had clean starts, which we hope were because of the racers showing respect, but likely due to the pushback bumpers now implemented for the first time at the SuperNationals. Jack Jeffers (Benik) came out strong on the day, moving up from the third spot in both the AvsD and AvsC groupings to win both races. Jeffers won the first by two tenths ahead of Nikita Johnson (Energy) and two-time defending SKUSA Pro Tour champion Carson Morgan (Kart Republic). Jeffers was able to drive away to a 1.8-second gap in the second heat, with Morgan – the top qualifier – dropping to just second spot and two-time IAME International Final winner Brent Crews (Nitro Kart) in third. William Macintyre (Benik) won a great battle in the BvsC race, climbing from 11th to first to edge out Mathias Coito (Mad Croc) and Kai Sorensen (Tony Kart). The ‘Jamaican Sensation’ Alex Powell (Energy) was able to hold off a charging Sorensen for the BvsD heat win. Aden Rudolph (Birel ART) was in the mix, challenging Powell for the lead but ended up third. 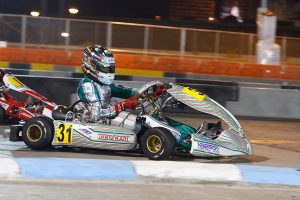 The game is changed in the KZ category as it is not the domination of Paolo de Conto as we thought heading into the SuperNationals. With Dutchman Marjin Kremers (Birel ART) earning the pole position, he launched off the grid to lead the field around for the opening lap. They were joined in the race by German driver Noah Milell (Tony Kart). Kremers and De Conto fought hard for the first spot, with contact happening on the entry of turn one. It sent De Conto around and out of the race with front end damage, while Kremers continued in second behind Milell. They would finish that way with Milell holding a 1.3-second advantage with Kremers in second. Maximilian Paul (DR Kart) moved up to third ahead of Mathias Ramirez (GFC) and Leonardo Lorandi (Parolin), up eight spots. With the DNF, De Conto was on the offensive in the second heat, with Kremers the target. The polesitter was able to hold off the two-time world champ to score the win with Milell right there in third. Ramriez added another fourth with Kyle Wick (CRG) in fifth.

The X30 Senior class provided some of the most exciting racing on the day, beginning with the opening heat of AvsD. The lead group stacked up late and diced to the checkered flag with reigning world champion Lorenzo Travisanutto (Kart Republic) securing the top spot. Top qualifier Cedrik Lupien (Kosmic) dropped to second with 2016 world title winner Pedro Hiltbrand (CRG) in third. So far, Christian Brooks (FA Kart) has the advantage with two heat race wins. The first came in BvsC, as he drove away to a 1.388-second advantage. Senior rookie Matheus Morgatto (Exprit) was second with last year’s winner Joshua Car (Exprit) in third. Brooks’ second was in the BvsD where the American beat Italian Travisanutto after leading all 12 laps. Brazilian Morgatto was a close third in another exciting heat race. The Lupien brothers were able to triumph in the AvsC heat with Cedrik in the top spot. SKUSA #2 plate-holder Samuel Lupien (Kosmic) climbed up five spots to second with KartSport North America’s Brandon Jarsocrak (Kart Republic) recording two top-six finishes, his best a third behind the Lupien’s. 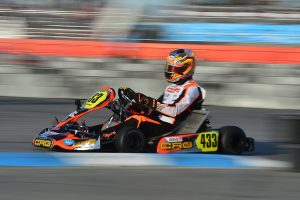 Top Master Shifter qualifier Rob Logan (CRG) held on through the two heat races to record a perfect score heading into Situation Saturday. Logan led all 12 laps in Heat #1 with three-time SKUSA Pro Tour champion Jordon Musser (Birel ART) on his bumper. Aussie Jason Faint (Sodi Kart) was third. The same drivers were in the mix in Heat #2, this time with last year’s winner Ryan Kinnear (Ricciardo) on the move. Kinnear spun on the opening lap in first heat, and charged forward to gain five spots to finish behind race winner Logan. Faint was third once again as Musser ended up fourth with fast lap of the race.

The X30 Master class is among the most competitive at the event, and Friday was a bit aggressive in the heat racing. That said, top qualifier and two-time winner Kip Foster (KF Kart) won both his heat races. The first came in AvsD as he held off fellow Aussie Jason Burns (Kosmic) with Luis Schiavo (Tony Kart) in third. The second was AvsC where Foster pulled away thanks to a battle for second, as two-time winner Billy Cleavelin (Kosmic) won that fight over Jess Peterson (Ricciardo). 2016 winner Renato David (Tony Kart) took advantage of the red flag for a broken water barrier, grabbing a number of position on the restart and another full course caution. David gain 10 spots to end up winning the race ahead of Matt Johnson (FA Kart) and Cleavelin. Johnson came out of an amazing battle where the leaders went three-wide twice, resulting in contact between Schiavo and Burns. Johnson slipped away for the win with Eric Molinatti (CKR) moving up to second and California ProKart Challenge champion Nick de Graaf (Kosmic) in third, up 10 spots after 12 laps. 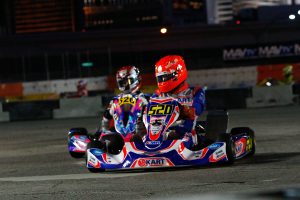 The inaugural wheel-to-wheel action for the new KA100 Junior class took part under the Las Vegas lights with some hard racing. The opening heat saw a number of drivers collected due to contact in the first lap. The provisional win went to top qualifier Luca Mars (Tony Kart), leading the majority of the race. A jump start penalty took the win away, dropping him to sixth in the order. That gave the charging Aussie James Wharton (FA Kart) the victory after he gained eight spots. Right behind him was Kaden Wharff (Top Kart), improving six positions to place second ahead of Dylan Christie (Kosmic). Mars went error-free in Heat #2, driving away to a 1.766-second win as they fought for second behind him. Wharton won that fight, up seven spots with Christie holding onto the third spot once again.

A new face greeted us in the opening heat for the Micro Swift category. Kiwi Jay Urwin (Benik) won the race, edging out SKUSA Pro Tour champion Max Garcia (Kart Republic) by 75 thousandths of a second. SKUSA #3 plate-holder Ben Maier (Nitro) climbed six spots to finish third. Garcia was able to reach the line first in Heat #2, holding off Tristan Young (Nitro) for the win with Ethan Ayars (Parolin) able to hold his third spot ahead of Urwin.