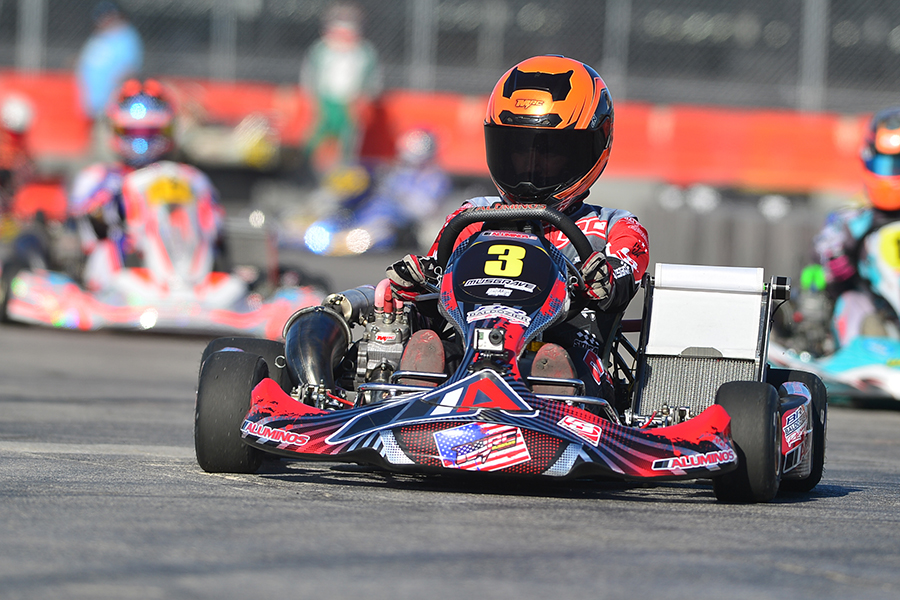 It is the race everyone has been waiting for – the Superkarts! USA SuperNationals 22. The event officially kicked off on Wednesday when the roughly 530 drivers took to the temporary circuit outside the Rio All-Suite Hotel & Casino in Las Vegas. Four rounds of practice were all that competitors were given on the day, with Thursday setting the stage with three more sessions, in addition to qualifying. Each of the 10 categories set the field for the upcoming heat races over Friday and Saturday in preparation for SuperSunday. 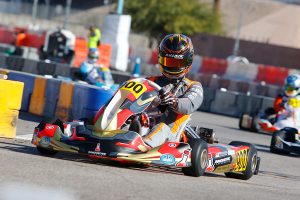 Colton Ramsey became the inaugural pole sitter in the KA100 Senior class at the SuperNationals (Photo: On Track Promotions – otp.ca)

The sold out Pro Shifter category – featuring 50 drivers with the combination of S1 and S2 – was paced by last year’s S1 winner Billy Musgrave (Aluminos). The two-time SuperNats winner set a time of 40.626 before a red flag for a broken water barrier in turn 10. That ended their session roughly two-minutes early, and delaying the action for the remainder of the day. Musgrave was two tenths clear of Frenchman Jeremy Iglesias (Formula K) with 2018 SKUSA Pro Tour champion AJ Myers in third for his Mad Croc debut. Emiliano Salazar (Praga) was fourth with last year’s provisional S2 winner Jason Pettit (Aluminos) completing the top-five.

It is a very close field of drivers in the inaugural running of the KA100 Senior field. The 41-driver field was separated by thousandths down the order, with Innovative Performance’s Colton Ramsey at the top. In the sixth session, Ramsey made contact with the wall avoided a slowing kart, and his Exprit went on the chassis table then and after session seven. The crew did their job, and so did Colton – who got to meet the infamous Gordon Ramsay at his steakhouse last night. The racer Ramsey posted a 45.417-lap to edge out Aussie Scott Foster (KF Kart) by just sixth thousandths of a second. Texan Austin Osborne (Tony Kart) and Steve Barros (Tony Kart) made their returns to the SuperNationals with the third and fourth quickest times as Team FMS driver Josh Hotz was fifth aboard the new 2019 Merlin LM30 to cap off the fast-five. 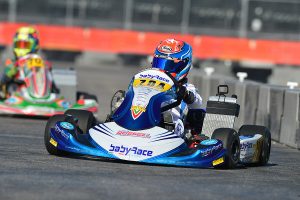 In a strange situation for two-time SKUSA Pro Tour champion Carson Morgan, the provisional winner from last year set fast time in the Mini Swift qualifying session. Morgan began the event aboard a Tony Kart, and ended up switching back to his Kart Republic chassis in the morning. Morgan posted a 48.167-lap to end the two groups as the fastest. The ‘Jamaican Sensation’ Alex Powell (Energy) was off by just 73 from the pole position. VemmeKart USA driver Elliot Cox was third with second generation driver Aden Rudolph (Birel ART) pulling out his best qualifying performance in SKUSA competition in fourth. Texas ProKart Challenge top contender Jack Jeffers (Benik) rounded out the fast-five. 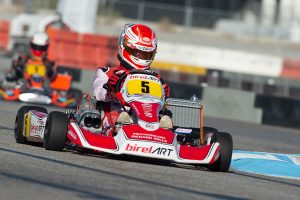 Starting from P1 in the KZ category is Marjin Kremers (Photo: On Track Promotions – otp.ca)

The last class to hit the track in qualifying was the headline KZ division. The session was slowed with a red flag for drivers off in the final corner. Once the officials got the repairs done, the drivers took back to the track to record their fast lap. At the same time, the live timing system experienced a hiccup, thus leaving us in the announcing tower in the dark. Once the times were set, it was Dutchman Marjin Kremers (Birel ART) with the fast time, posting a 40.204 on a chilly, dark track under the lights. The top-four were within nine hundredths of a second, as Swedish driver Noah Milell (Tony Kart) was second, just ahead of three-time winner Paolo de Conto (CRG). Kyle Wick (CRG) was the top USA driver in fourth, with Maximilian Paul (DR Kart) completing the fast-five.

The X30 Senior top qualifier was decided off the track. Barbados driver Zane Maloney – making his Kart Republic debut – set fast time, only to be assessed a penalty for contact that took away his fast lap of the session. That moved him to tenth in the order, moving all the others up one spot. That landed Rolison Performance Group driver Cedrik Lupien (Kosmic) to the top spot. The Canadian making his first start in some time posted a 42.992-lap to be the only driver outside of Maloney to break the 43-second mark. Senior rookie Matheus Morgatto (Tony Kart) was second, just ahead of defending winner Joshua Car (Exprit). 2018 World Karting Champion Lorenzo Travisanutto (Kart Republic) was fourth with Ryan MacDermid (Birel ART) – carrying the #6 to honor IndyCar driver Robert Wickens – completing the fast-five. The top-seven, including Christian Brooks (FA Kart) and Dante Yu (CompKart) were all within one tenth of a second. 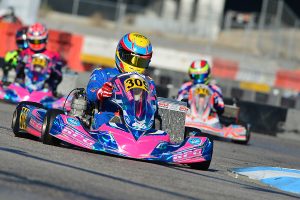 Cedrik Lupien moved up to the pole position spot after penalties in X30 Senior qualifying (Photo: On Track Promotions – otp.ca)

Two-time winner Kip Foster (KF Kart) set the pace for much of the day in the X30 Master class. Foster continued his reign at the top of the charts with a 43.789-lap to secure the pole position. The top-five were tight, separated by just eight hundredths of a second. Former provisional winner Eduardo Dieter (CRG) was second ahead of another two-time winner in Billy Cleavelin (Kosmic), making his return to the SuperNats. Aussie drivers took three of the fast-five, including Jason Burns (Kosmic) and last year’s winner Kris Walton (CompKart). 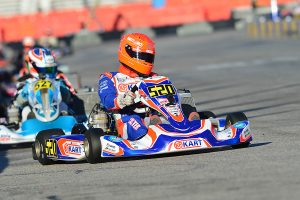 Kip Foster begins his bid for three in X30 Master from P1 position in the heat races (Photo: On Track Promotions – otp.ca)

The qualifying session for the Micro Swift division began with a red flag for Jack Iliffe (Benik) flipping over in turn one. He was able to get up and walk away, and the session was restarted. One driver was unable to get restarted – that was SKUSA #2 plate-holder Caleb Gafrarar (Parolin) who will start each heat race from 39th. SKUSA Pro Tour champion Max Garcia (Kart Republic) thought he had the pole position until the final seconds when Tristan Young (Nitro Kart) jumped up to the top of the order with a 49.550-lap. Ethan Ayars (Parolin) was third, ahead of Ivanna Richards (Tony Kart) with Kiwi Jay Urwin (Benik) in fifth.